HG Wells-inspired Steampunk series to be reprinted, and continued in 2000 AD 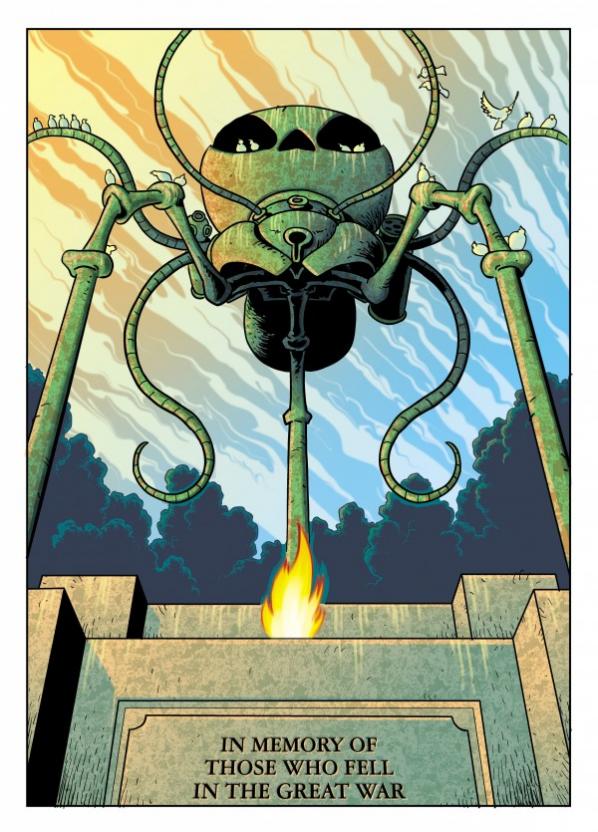 2000 AD has acquired the rights to Scarlet Traces by Ian Edginton and Matt “D’Israeli” Brooker.

The legendary British comics publisher has secured the global rights for the series, its sequel The Great Game, and its prequel – the pair’s adaptation of HG Well’s The War of the Worlds – and will reprint them in new editions.

2000 AD is also delighted to announce that Edginton and D’Israeli will be working on new stories in the series, an inventive Steampunk sequel to Wells’ all-time classic by two of comics’ greatest talents.

Scarlet Traces took science fiction’s first great novel and merged it with a dose of Sir Arthur Conan Doyle, John Wyndham and Nigel Kneale, D’Israeli’s awe-inspiring world-building with Edginton’s deft grasp of characterisation and trademark ‘pipe and slippers gothic’ style producing a comic that is at once tremendously thrilling and humbly grounded.

Originally published online before being serialised in 2002, it takes place ten years after the abortive Martian invasion of Earth and, thanks to reverse engineering the alien technology littering its countryside after the war, Britain now dominates the world economically and politically. However, women’s bodies – all drained of blood – are being washed up on the banks of the River Thames. Major Robert Autumn DSO emerges from comfortable retirement with his trusty manservant Colour Sergeant Arthur Currie to hunt down the culprits – but what they find will shake their world to its very core.

The Great Game was published by Dark Horse Comics in 2006 and is set 30 years later, when the increasingly autocratic British government has launched a counter-invasion of Mars. But aristocratic young photojournalist Charlotte Hemming discovers that the war is not going well for old Blighty…

Ian Edginton said: “’Is Scarlet Traces going to be reprinted?’ and ‘Is there going to be another series?’ are the two questions we’re always asked when we do signings and conventions. It pleases me no end to say that I can now give hearty ‘yes!’ to both. We’ve viewed a great many options over the years with regards reprints and new series and eventually, we both came to the same conclusion that the best place, the most natural fit, would be at Rebellion. We have created a substantial body of work for them and always been happy with the way we’ve been treated. I always envisioned that there would be more Scarlet Traces stories to tell and now we can begin in earnest.”

Matt Brooker said: “Scarlet Traces began its life in print at the Judge Dredd Megazine in 2002, so in many ways this feels like coming home. Ian and I have always had an excellent relationship with 2000 AD, who have backed us in doing some of our best work. It’s always tough to let your offspring go, but we trust Rebellion to do a great job both in publishing and promoting Scarlet Traces, and we’ve every confidence it will thrive in its new home.”

Ben Smith, Head of Book and Comics Publishing at Rebellion Publishing, said: “Ian Edginton and D’Israeli are two of the most significant creators to emerge in British comics over the last twenty years. Scarlet Traces was a standout series that we have long admired. When Ian and Matt were looking for a new home for the collected series I knew that Rebellion had an opportunity to not only produce a new edition that would do this material full justice, but that by bringing the series in-house to 2000 AD, we would be able to continue the saga and have the creators tell the full story they have always wanted to and see it run for years to come.”