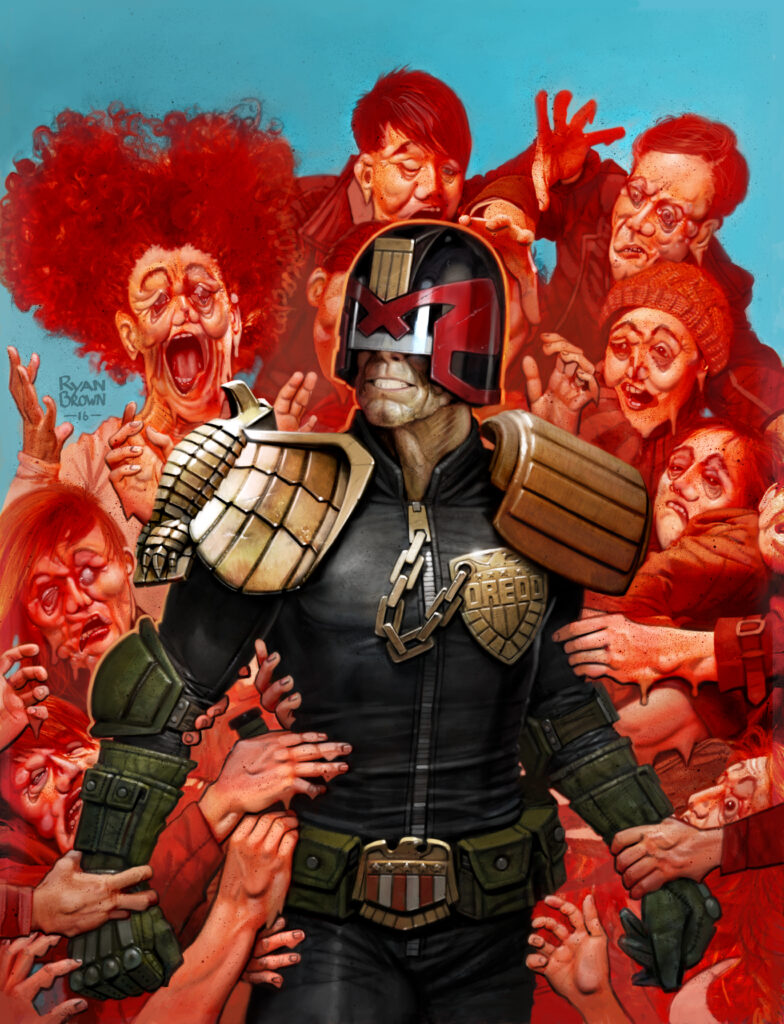 Welcome to 2000 AD Covers Uncovered, where this week we offer you a double whammy from fan favourite Ryan Brown! Ryan has delivered two covers to the Nerve Centre recently, Prog 2018’s ‘The Order’ cover and the prestigious cover of Prog 2020, Judge Dredd’s 40th birthday Prog!

I asked Ryan to tell us about his recent covers, starting with his terrifying Order cover of Prog 2018. Ryan said “Heres the rough for ‘The Order’ cover, I wanted to have a war of the worlds style image , a little B-movie looking, it is a giant worm after all!”

Ryan’s zarjaz digital art has, quite rightly, been blowing fans away for some time now. As a long time 2000 AD fan himself, Ryan is aware of the thrill of appearing in the Galaxy’s Greatest Comic and is keen to bestow this honour on fellow Squaxx. Like a modern day Santa Claus, Ryan put two of his friends into the painting. He said “Here’s some reference of two of my friends I used for the fleeing victims. They are called Laurence and Mark and are two massive 2000 AD fans!”

Mark and Laurence before being eaten by a giant beastie!

So below you can see Laurence and Mark being rewarded for their years of devotion by being murdered by a giant, mutant Wyrm. Oh Ryan, you’re so nice!

Ryan said “Tharg wanted me to do a cover where Dredd was surrounded by people with melting skin, but they couldn’t be scary 🙁 So i gave them strange melted noses which gives them more of a silly look I think! I did’nt want Dredd looking threatening,  just a bit agitated. Here’s the rough…”

Again, Ryan used a fan for reference for the picture, he said “I’ve included an image from a Dredd cosplayer I found on the web. I liked his pose so wanted to do something similar.”

The Butler is it!

With a bit of detective work, I managed to find out that the cosplayer is none other than Dredd fan, Jared Butler, aka Max Replica! Not only is Jared the body of Dredd in this recent cover, he acually provided the VOICE of the lawman for the awesome Judge Minty fan film! Jared is a professional voice over artist, notably being the ‘voice double’ for Johnny Depp in several official Pirates of the Caribbean projects and other Depp vehicles. Jared was thrilled to be used on the cover, he said “That is so cool! The photo was snapped when I was walking back to my hotel room from San Diego Comic Con. You can see my bag in my hnd, it’s like Dredd just finished his shopping!”

Jared sent a more official photo, which I am thrilled to share below…

“Drokkin’ weather control is on the fritz again!”

You can read a great interview with Jared on his experience recording the voice of Dredd over on the excellent Judge Tutor Semple blog.

Finally, Ryan found another reference that he couldn’t resist using. He said “I also found an image of a melting womans face which I liked 🙂 he he he!” Let’s hope the police never have a reason to check Ryan’s internet history, he’ll have a lot of explaining to do!

“Plastic surgery? Moi? I don’t know what you mean dahling!”

And here’s the finished cover, awesome!

The more attractive attendees of the 40th Anniversary Celebration.

Massive thanks to Ryan for sending the images. Be sure to check out Ryan’s website to see lots more amazing 2000 AD related images!