The making of Carlos Ezquerra's Zarjaz Cover of the 40th Anniversary Special! 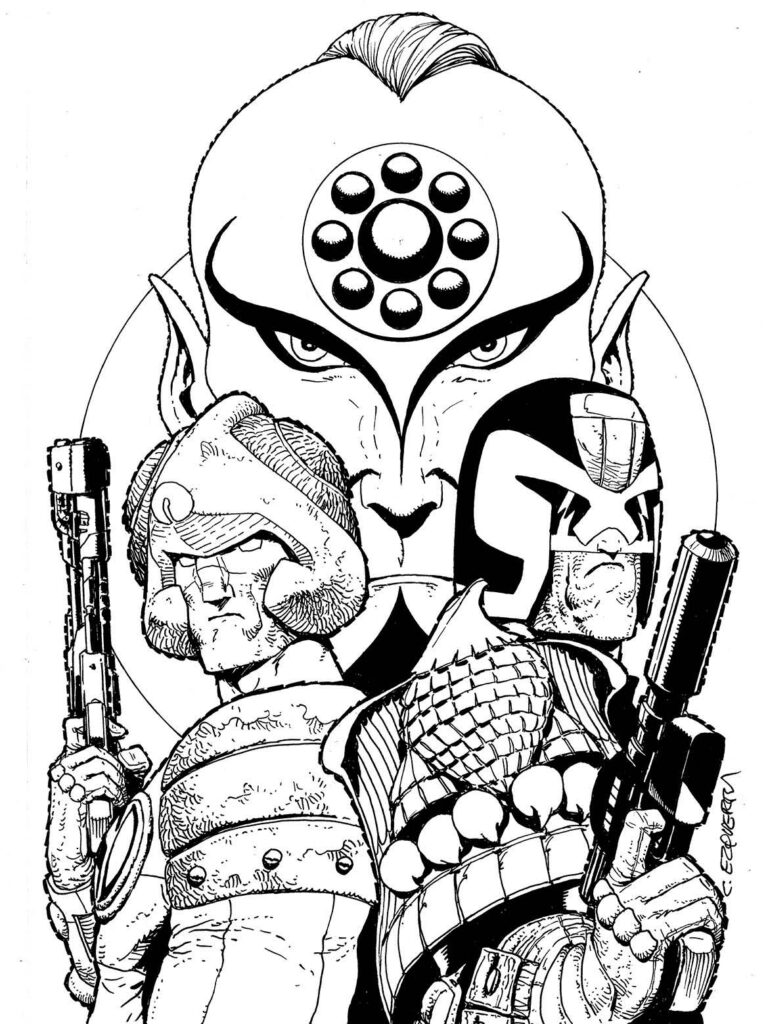 Rejoice Earthlets as the 40 Year Special is finally ready to be beamed to your Optical Receptors! The mighty one has pulled out all the stops to bring a Prog jam-packed with some of the very greatest Thrills from the very best creators!

There are few artdroids that could do justice to such a monumental Prog, however it is all in a day’s work for the daddy of both Judge Dredd and Johnny Alpha, the mighty Carlos Ezquerra!

Below, we see Carlos’ sketch for the cover, featuring three of the most iconic, not to mention grumpy, faces in British comics.

The 2000AD ABBA tribute album gets a cover.

After studying his handome features, the Mighty One approves the rough and instructs the Ezquerra Droid to “Get on with it!”

Note, the Ezquerra jaggies in full effect here. Each one is lovingly raised on a farm in Andorra before being carefully placed on Carlos’ artwork…

Tharg about to play with his ThreeA figures

Then the Ezquerra droid, a pioneer of computer coloured comic artwork, digitally colours the piece. It is a little known fact that every time Carlos does a cover, the computer he uses has to be replaced as it explodes with pure Thrillpower.

The mean, the green and the machine

Not content with providing the cover of the 40th special, Tharg also created an exclusive print for Vice Press, to be sold at the excellent 40th Anniversary Celebration in London. The print featured Dredd from 1977 having a chin off against Dredd from 2017! How fashion’s change, eh? Here’s the rough…

“A word of advice, look out for a juve called Maybe…”

Set your Thrillbuffers at maximum for those amazing inks – swoon!

“Hey Joe, you remeber the codpiece years?” “No.”

Lastly a bit of tone and text for the final print, absolutely Lawsome!

Who the hell’s gonna mess with them?

Huge thanks to Carlos for sending the images and for attending the 40th Anniversary bash. He sketched ALL day, chatted to fans and was as kind and gracious as ever.

Here’s to another 40 years of Carlos characters and covers!