The 2000 AD Covers Uncovered feature is back with Cliff Robinson bringing the heat to Deadworld! 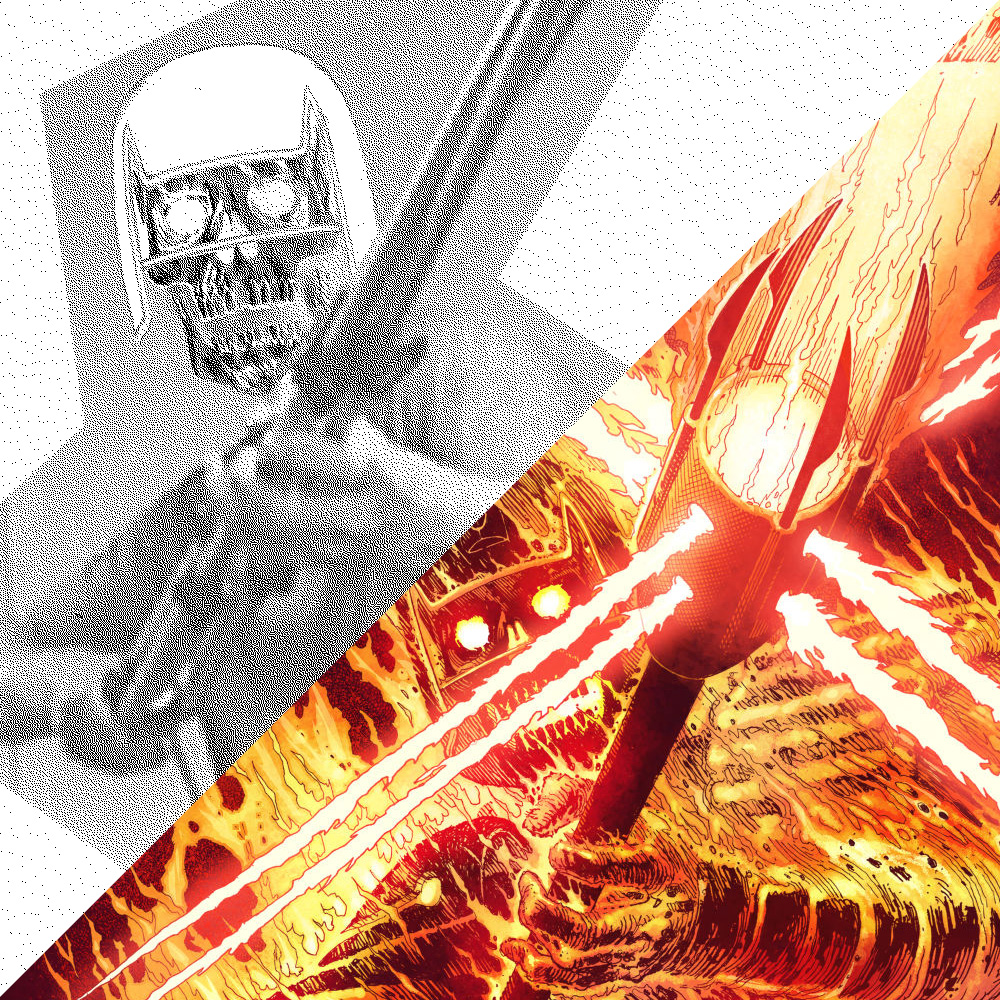 A long time ago, in a galaxy far, far away, Pete Wells came up with 2000 AD Covers Uncovered, getting the greatest art droids in the galaxy to tell all about their covers for the Galaxy’s greatest comic, 2000 AD.

Well, it’s now back courtesy of Richard Bruton, with Pete coming back every so often to join the fun!

And what better way to kick it all off again than with the legendary Cliff Robinson and his regular cover colourist partner in crime, Dylan Teague?

Cliff Robinson’s been a mainstay of 2000 AD from way back, with a first strip back in Prog 362 (Future Shock: Dead Clever, 1984) and his first cover a classic Dredd on Prog 414 (1985). Since then, his tight lines and great designs have made the Prog look incredible on the stands.

Now, over to Cliff to talk about putting together the cover to Prog 2152…

First step. I took some photo reference of myself posing as Judge Fire. Luckily, my head is actually just a skull, very much like Judge Fire’s, and I also wear a helmet similar to his one. I knew this would come in handy one day. The eagle eyed will notice a camera tripod standing in for Judge Fire’s quadrident flame thrower.

I then took the photo reference and wilfully ignored most of it in favour of an image I probably could have drawn straight from my mind’s eye in the first place (but was too scared to, due to the creative paralysis caused by the horror of the ‘blank sheet of paper’). Although I think I should have stuck a bit closer to photo to be honest.

Next step, adding in flames and detail by referencing Dave Kendall’s amazing depiction of Judge Fire featured in part 3 of ‘The Fall of Deadworld’ (pages 2&4). Some may say ‘swiping’ rather than ‘referencing’, but these people are often dreadfully unhappy souls and should be pitied.

At this stage, the preliminary sketch was sent by compoota electrickery to the editor of 2000 AD, The Mighty Tharg. Luckily, the Quaxxannling was happy to give me the go-ahead to produce the final artwork.

Time to add the burning logo in…

The finished artwork. Although I put 100.5% effort into trying to make this a truly memorable 2000 AD cover, I have to admit that the second prelim (pic 3) still looks far more dramatic than the finished art.

Finally, in getting the finished cover I knew Dylan’s colouring would save the day, and I wasn’t wrong. Cheers, Dylan!

Over to Dylan Teague now, Cliff’s regular colourist for many years, who had this to say about getting those flaming hot colours onto the finished Robinson bit of brilliance:

A pleasure as ever to colour Cliff’s stuff. I coloured this on an iPad pro in clip studio paint. I used a few layers over the the lineart to try and get that glowing fire look, hope it worked!

Oh yes, we all reckon it works, and you can see it burning on the racks of your local newsagent and comic shop right now.

Thanks Cliff and Dylan for giving us the lowdown on getting Judge Fire blazing his way across a stunning cover. Tune in next time for more behind-the-scenes delights from the cover of the Galaxy’s Greatest Comic with 2000 AD Covers Uncovered!

Oh, and if you’re wondering about the first ever Cliff Robinson cover for Prog 414…