The Making of Dave Kendall's Fearsome cover of Prog 2029! 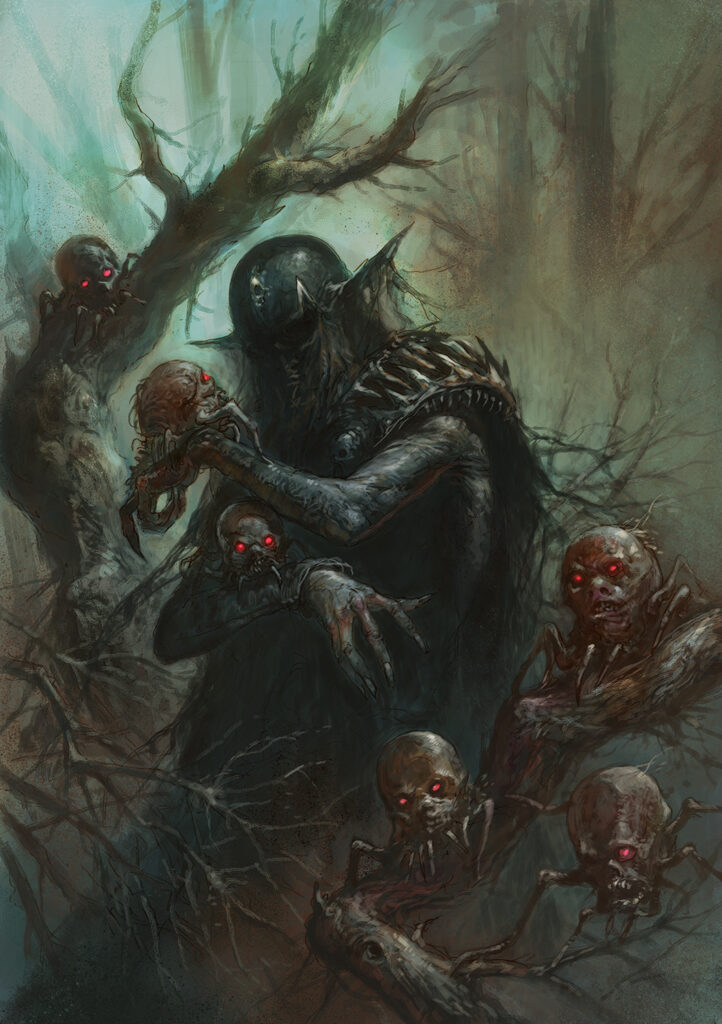 Dear me! The TeenyMeks haven’t aged well have they?

Welcome to 2000 AD Covers Uncovered which this week explores the making of Cursed: Fall of Deadworld‘s artist Dave Kendall’s terrifying cover of Prog 2029. The cover shows Senior Judge Fear and his chilling agents of intrusion on a jolly jaunt in the forest…

Dave sent copious notes and process images for this cover, so let’s begin by thanking him very much! He said “This is the first time one of the major four dark judges have directly intervened in the Deadworld plotline. They’ve lurked around the outskirts up to now pulling strings behind the scenes while the lesser Grey Judges carry the load.”

“I really wanted to do the cover for this issue. So although trying to crack the deadlines on the strip I managed to fit the time in to this. In this issue we have a new use for Fear’s shrunken heads. Under the influence of dead fluids they become spidery things with the power to infiltrate and worse. I probably came up with the idea after watching Despicable Me, when robotic cookies break into a vault. I’m not sure Fear does home baking so I plumped for his heads. I have to mention Kek-W, my partner in crime. He is a most generous writer. I’ll come out of research and development with these strange ideas and he jumps on them with relish. I loved the use he found for these heads. I hope they are as creepy to read as they were to illustrate.”

“In the story Siren is waiting in a blasted copse of trees observing the Wall where Jess and Fairfax are holed up. Fear makes a rather ghostly appearance among the trees. So that was the simple premise for the cover. First up was a quick digital rough…”

“Tuck into the bisssssscuits of Fear!”

Dave continues “Tharg was happy with this direction. I’d sussed out many of the compositional elements at rough stage so it was a case of tweaking and refining the drawing.”

“As this was going to be digitally painted, like the strip, I didn’t go over the top with rendering all the shadows in this line version.”

“Next stage was a quick underpainting to establish mood and atmosphere. I really like the mistiness of this but the cover needed to Pop a little more.”

“The next stage was rendering this up to a finished state…”

Scary, Scary, very contrary! How do your shrunken heads grow?

“Tharg was happy with this, but felt the background needed to be lightened, to increase the POP.”

Fear shall have no Minions!

And there we have it, surely the making of one of the scariest covers in 2000AD’s rich history. A huge, huge thank you to Dave for sending such detailed and interesting notes, this one has been a blast!

So, next time you’re alone and you hear faint noises… perhaps one of Fear’s evil little critters is watching you…