The making of Simon Coleby and Len O'Grady's zarjaz cover of Prog 2075. 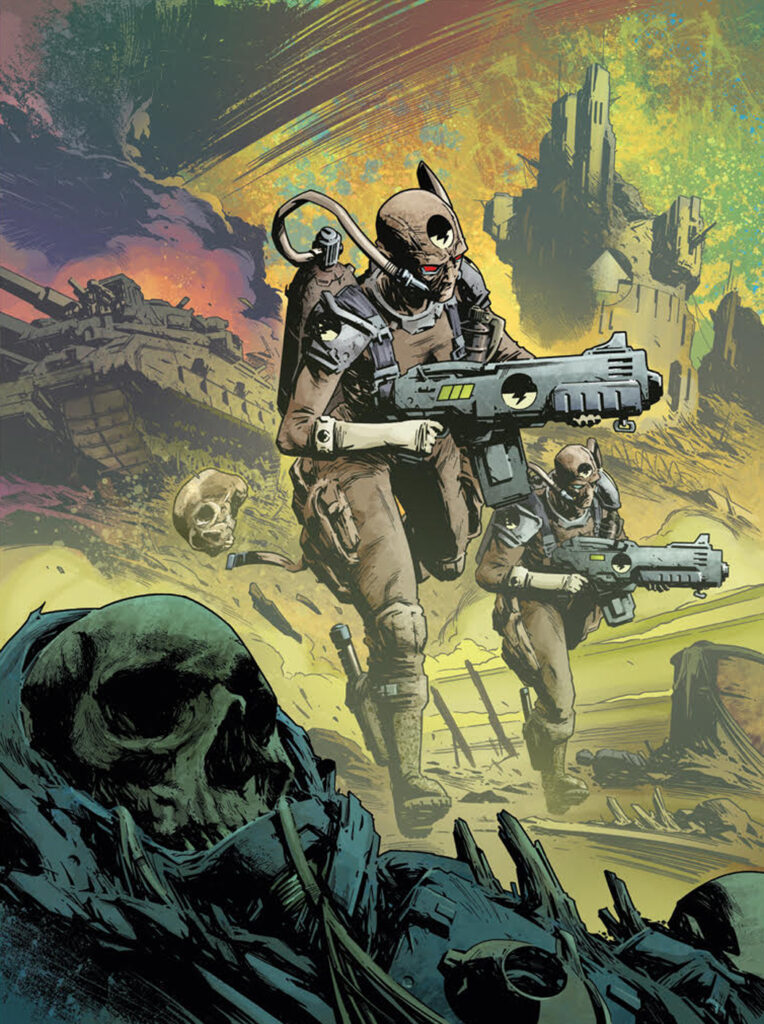 Truly, there are celebrations in the 2000 AD Covers Uncovered sub-sub-sub-basement today as I finally get to feature the work of the magnificent Simon Coleby. I have long been a fan of this brilliant artist; a droid who renders death and destruction, creepy looking skulls and industrial tech better than anyone I can think of.

Simon is back on art duties for the current Jaegir story ‘In The Realm of Pyrrhus,’ which sees Kapiten-Inspector Atalia Jaegir return to the hellhole that is Nu-Earth. Atalia and her team are on a mysterious mission at the behest of a particularly nasty war criminal, but what could be so important that she would travel to such a forsaken planet?

Simon was kind enough to send several images and let us into the secrets of his workflow, he said “Tharg’s original brief was really straightforward — something along the lines of ‘Maybe Atalia running towards us across a Nu Earth Battlefield’. That was fine, but I decided to just try something a little different, so I went with a first sketch of a hallucinatory/nightmare image of Atalia’s Dads’ big, scarred head looming up out of the chem-clouds. In retrospect; not the strongest idea ever, and a bit cliched…”

“Bloody Josef Jaegir, always has his head in the clouds!”

Simon continues “Tharg didn’t go for that one, quite wisely. Also, in retrospect, the previous couple of progs have featured fairly close shots of heads and faces, so it was right to take this another way. Of course, Tharg alone has the insight to know these things — we humble droids do well to heed the inhumanly wise words of Green Bonce.” (And it’s the best way to avoid a Rigellion Hot Shot – P-Wls.)

“My pencils for the finished version came together quite quickly, without any major issues. These days, rather than graphite, I tend to do a quick coloured-pencil layout, then refine that work in fine-liners and markers. I find that gives me a much cleaner scan, and makes the inking a more straightforward process.”

“The ‘pencils’ shown here are precisely that scan. The coloured version is what I print out, on A3 bristol board, and then ink.”

“Whose stupid idea was it to do the Nu-Earth fun run in these stinking costumes?”

“The inks are very close to the pencils, as almost all the design decisions have been resolved at that stage. In the inks, I’m largely concentrating on line weights and textures — anything to add life to the piece. Cut up bits of kitchen sponge dipped in Indian ink is one of the very expensive, elite, hi-tech tools I tend to use a lot.”

“Nu-Earth is so Bracing! And it’s quicker by Black Hole!”

With sponges dirtied and stunning inks complete, the art is taken by Souther Hoppa to colourist supremo Len O’Grady. Len has been absolutely knocking it out of the park with his colouring on Simon’s interior work, really bringing the disgusting, cloying chem clouds of Nu-Earth to life. Simon was quick to praise him, he said “Len’s colours are consistently amazing, and he’s added so much to my work on ‘Jaegir’. I was absolutely delighted when he sent me a copy of this one. The chem clouds are almost psychedelic in their luminous, toxic intensity. I imagine you’d hallucinate colours like that if your mask failed on Nu Earth. Very pretty to look at, as your lungs exit through your nostrils. Good times!”

“Down the road I look, and there rots Mary! Skin peeled off and looking scary! It’s gross, to touch, the green, green gas of home!” Popular song by Tomac Joneski.

And when Total War were at their height, Simon brought us this magnificent slice of Mega-City destruction!

And finally, this wonderful wraparound for the Origins epic which is truly (law)masterful!

Just another day at the office…

A huge, huge thanks to Simon, there’s another off the bucket list!