What's coming from the Galaxy's Greatest Comic in September - check out our Diamond Previews listings and order from your local comic book shop now! 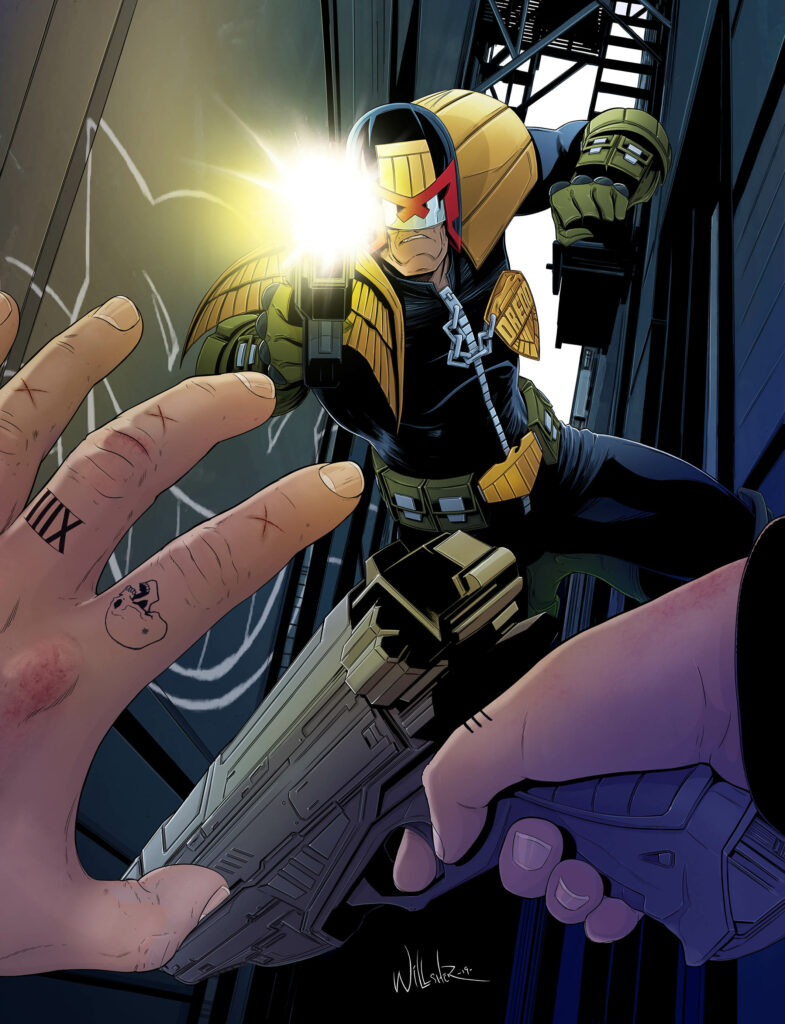 The advance information for 2000 AD’s comics for September 2019 has been released – get all the skinny on what’s coming out from the House of Tharg three months from now!

September’s issues of 2000 AD and the Judge Dredd Megazine are now available to order from comic book stores in the latest issue of Diamond Distribution’s Previews magazine, which is out now.

Incredible SF action from the Eisner-nominated UK anthology! The run of stories wraps up in Progs 2147-2149 – future lawman Judge Dredd seeks inside help to nail a criminal in ‘The Fall of Barbarara Grimm’ by Mike Carroll and Nick Dyer; Jaegir’s comrades seek to free her from the Southers’ clutches in ‘Valkyrie’ by Gordon Rennie and Simon Coleby; hitmen Sinister Dexter have to bodyguard an artificial intelligence in ‘Narrow Minded’ by Dan Abnett and Steve Yeowell; and realities collide in Indigo Prime: ‘The Fall of the House of Vista’ by Kek-W and Lee Carter!

Then in the bumper Prog 2150, a stunning new line-up of stories start – an ideal jumping-on point for new readers! Dredd has a special overseas mission to undertake in ‘Guatamala’ by John Wagner and Colin MacNeil; cop Bridget Kurtis returns and is investigating gang crimes in the fourth book of SF smash Brink, ‘Hate Box’, by Dan Abnett and INJ Culbard; we return to the world of the Dark Judges in The Fall of Deadworld: Doomed by Kek-W and Dave Kendall, with war about to break out; private investigator Mallory Hope is back, confronting the demons in 1940s L.A. in Hope… Under Fire by Guy Adams and Jimmy Broxton; and seventeenth-century zombie hunter Defoe heads for the moon as an ancient evil awakens in ‘The Divisor’ by Pat Mills and Stewart Kenneth Moore!

More action and adventure in the future-shocked world of Judge Dredd! It’s the final battle between Dredd and the Red Prince in the climactic episode of ‘The Red Queen’s Gambit’ by Arthur Wyatt and Jake Lynch; Psi-Judge Anderson’s cadets come under fire out in the Cursed Earth in ‘The Dead Run’ by Maura McHugh and Patrick Goddard; P.I. DeMarco fights for her life in ‘An Eye…’ by Laura Bailey and Paul Williams; Nia seeks a way out of the Brit-Cit gang life in ‘Diamond Dogs’ by James Peaty and Warren Pleece; and The Returners come under psychic assault in ‘Chandhu’ by Si Spencer and Nicolo Assirelli. In addition there’s interviews, features and more – and in the bagged mini-trade, there’s more zombie-slaying mayhem in the second book of Defoe: ‘The Damned’ by Pat Mills and Leigh Gallagher!