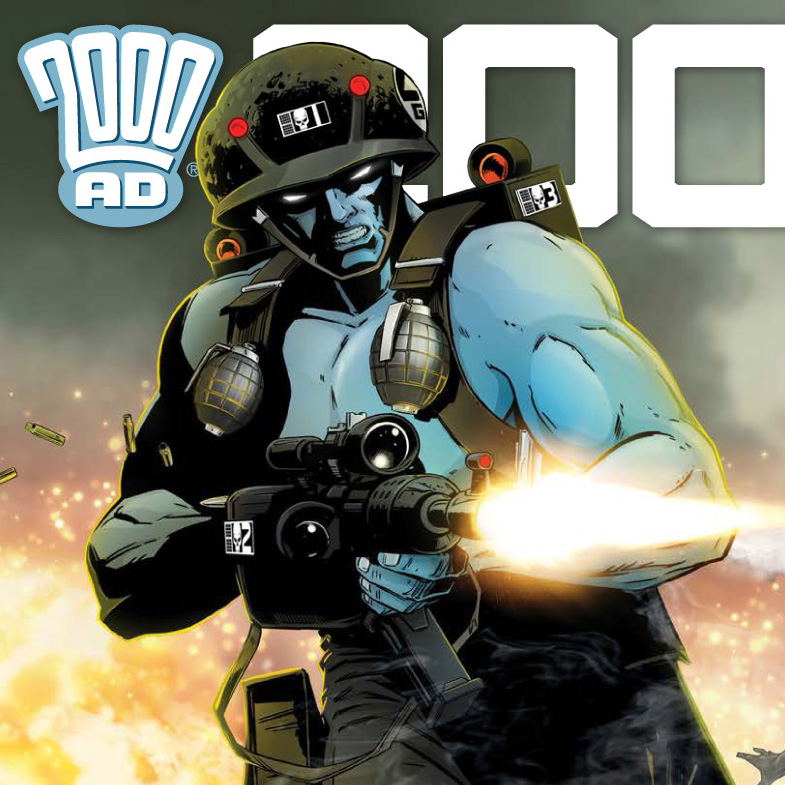 Another week, another brain-scrambling hit of highoctane excitement courtesy of the Galaxy’s Greatest Comic!

While Counterfeit Girl, Hunted, Flesh and Savage are all settling into their ghafflebette groove, Dredd thriller Get Sin comes to its bullet-sprayed climax this Prog!

However, the Williams script-droid will be back next issue with Henry Flint in tow for scrotnig brand-new story Act of Grud!

2000 AD Prog 2003 is available now in both print and digital from all good newsagents and comic book stores, plus digitally through the zarjaz 2000 AD apps for Apple, Android, and Windows 10 devices!

Judge Dredd: Get Sin
Rob Williams (w) Trevor Hairsine (p) Barry Kitson (i) Dylan Teague (c) Annie Parkhouse (l)
Mega-City One, 2138 AD. Home to 72 million citizens, this urban hell is situated along the east coast of post-apocalyptic North America, where crime is rampant. Tensions run a constant knife-edge, and only the zero-tolerance Judges — empowered to dispense instant justice — can stop total anarchy. Toughest of them all is JUDGE DREDD — he is the Law! Now, he’s leading a team into Sov territory in a retaliatory strike…

Flesh: Gorehead
Pat Mills (w) Clint Langley (a) Ellie De Ville (l)
The Cretaceous Period, Earth. By the 23rd century, most organic livestock is extinct, and mankind is surviving on synthetic food. In a bid to farm real meat, the corporation Trans-Time sends its employees back to the age of the dinosaurs to butcher the beasts, beaming their flesh to a hungry future. Now, following Base 3’s destruction, the operation must be moved to Texas, but little do the trail hands know that time is running out…

Hunted
Gordon Rennie (w) PJ Holden (a) Len O’Grady (c) Simon Bowland (l)
Nu Earth, just one planet among many caught up in a galactic war between the Norts and the Southers. Strategically vital, both sides are desperate to secure it but use of chemical weapons has rendered the atmosphere poisonous. A Souther general has turned traitor and sold information to the Norts, leading to the massacre of the Genetic Infantrymen. Now, he’s a wanted man and must stay one step ahead of his enemies…

Savage: The Märze Murderer
Pat Mills (w) Patrick Goddard (a) Annie Parkhouse (l)
In 1999, Britain was invaded by the Volgans. When lorry driver BILL SAVAGE learned his family had been killed, he began a one-man battle against the aggressors. In 2010, Savage led the resistance to victory, with the Volgans surrendering after the US lent their support. Now, in 2015, Savage has been stationed in Volgan-occupied Berlin, but the memory of the deaths of his wife and children every March is driving him to murder…

Counterfeit Girl
Peter Milligan (w) Rufus Dayglo (a) Dom Regan (c) Ellie De Ville (l)
The near future. In a city ruled by the multinational corporations, your identity is crucial — no one can get anywhere without being monitored and status-checked. But if you want a new I.D. then you can go to the ‘simmers’ — backstreet I.D. thieves that can create new personas by stealing the identities of others. Libra Kelly is one such simmer, and now wanted by the Albion Corporation she’s taken a new I.D. — but it’s diseased…