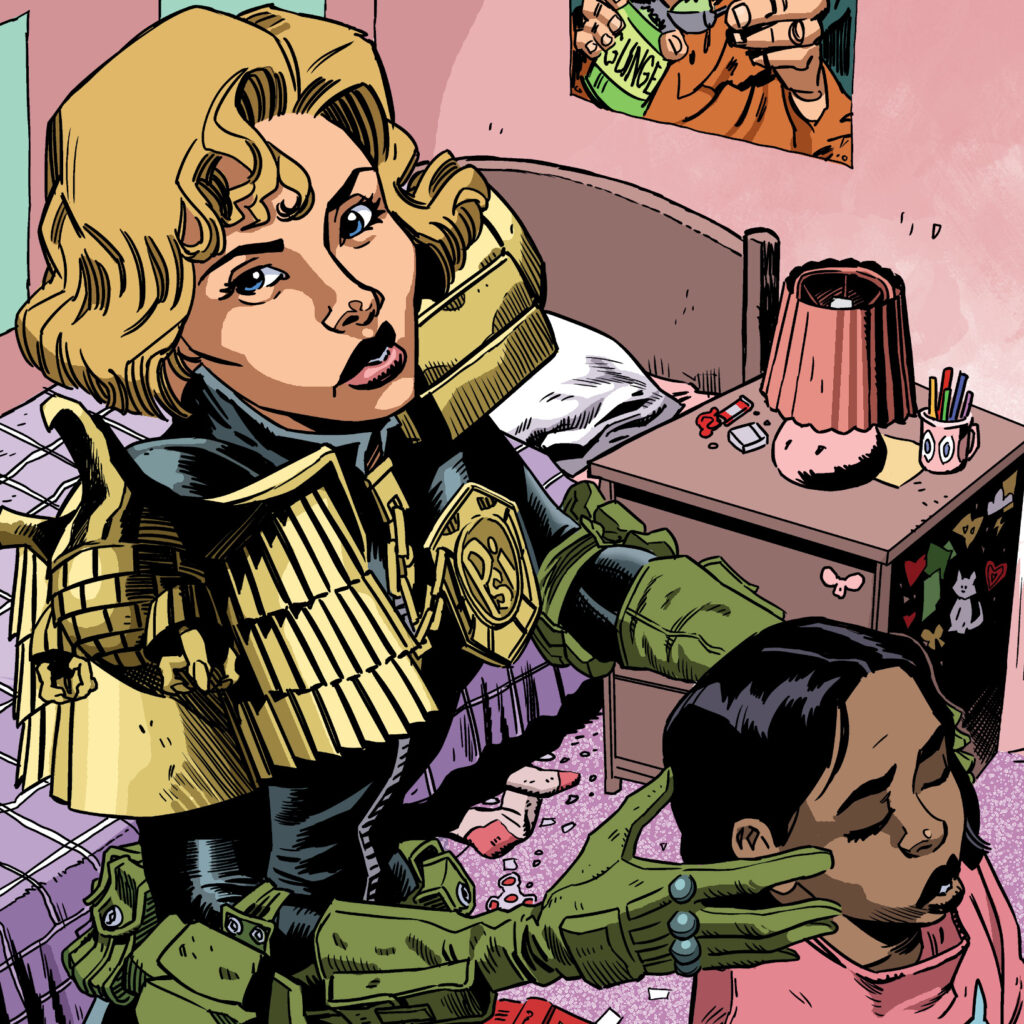 Well, this year 2000 AD Regened comes at you in the pages of the very special 48-page Prog 2030, out in May and features more Cadet Dredd, a new Rogue Trooper, Future Shock, and much more.

But, most importantly, this time you’ll get to see the early adventures of Mega-City One’s finest Psi-Judge, courtesy of Alec Worley and PJ Holden.

So, with the PJ Droid hard at work on the strip, we grabbed Alec Worley to chat all things Anderson…

Alec, last time there was a 2000 AD Regened, you were responsible for bringing us a version of Strontium Dog, right at the beginning of his bounty hunting career. This time, in Prog 2030, you’re turning your attention to another iconic character, Anderson.

Alec Worley: It’s very similar, I suppose, to doing Dredd as Cadet Dredd, the concept of Anderson, psychic lawmaker of the future, doesn’t need any idea of the continuity involved and new readers can jump on right away.

How did deliver something that fits into the all-ages aspect of the strip?

AW: Just make it relatable to the target audience. So I made sure there’s a younger character in there, along with things with which that readership will be familiar. As with writing anything, it’s all about identifying your ideal reader. That profile dictates EVERYTHING, from subject matter, panel count count, syntax, transitions, blah, blah, blah… Comics writing isn’t like posting on social media. You can’t just write for some amorphous generalised audience.

What age Anderson do we have here? Are you going the same route as Cadet Dredd? Taking Anderson back to the very beginning as a young novice Psi-Judge?

AW: I placed her in her ‘Debbie Harry’ days, so pretty much fresh out of school. I think that gives you a good visual key that synchs up with what’s gone before.

I’m presuming, as you did with Strontium Dog, that there’s no attempt to fit this story in with established continuity?

AW: None at all. Haha! Established continuity is meaningless to this readership, so I just wrote the story to be as accessible as possible. Stick to the basic concept and run with it.

What other characters would you love to see in an all-ages 2000 AD? If you could pitch one story, what would it be for you?

AW: I think Pat Mills should write an all-ages ABC Warriors, for sure. For me, I’d love to do more Black Beth, though the story of hers I did for the Scream/Misty Special was for a slightly older readership. For little ‘uns, though I reckon Robo-Hunter could be a winner!

With Regened and Prog 2030, we’re seeing 2000 AD reaching out to younger readers. In the past few years we’ve seen a huge explosion in kids reading comics, but they aren’t the comics adults are reading. They tend to turn their noses up at superheroes but simply can’t get enough of authors such as Raina Telgemeier. What are your thoughts on kids comics and the future?

AW: I think original graphic novels are the way to go in the long term. One-and-dones. I’m in complete agreement with you about creators like Raina Telgemeier and Dav Pilkey – these guys have initial print runs in the millions!!! Yet are almost never discussed in the comics news. Younger readers are chronically underserved by the mainstream (i.e. superhero) comics publishers. Friends who work at my local bookshop are always telling me about customers’ children wanting to read Captain Marvel or Spider-Man and all they can find on the shelves is a £30 collector’s edition of Batman with the Joker’s ripped-off face on the cover! Perhaps comics are still treated as a genre rather than a properly diverse medium. Go into your local Waterstones and you’ll find novels in the Young Adult, Tween, Middle Grade and nursery sections, while the graphic novels are just dumped in one place. Everything from Crossed to Lumberjanes. How on earth can you expect children to browse and find something they like? Or for parents to find anything appropriate if they’re new to the medium? Libraries at least curate their GNs a little better, but we all know where UK libraries are heading, sadly…

I feel like I’m painting a pretty gloomy picture here, but I’m confident that you’ve got a generation of kids falling in love right now with books like Dog Man, Baby-Sitters Club, Roy of the Rovers and the all-ages 2000 AD that comics can look forward to a super-strong talent pool in years to come!