The writer/artist on Cadet Dredd vs Grudzilla talks about his version of the all-ages tale for 2000 AD Regened! 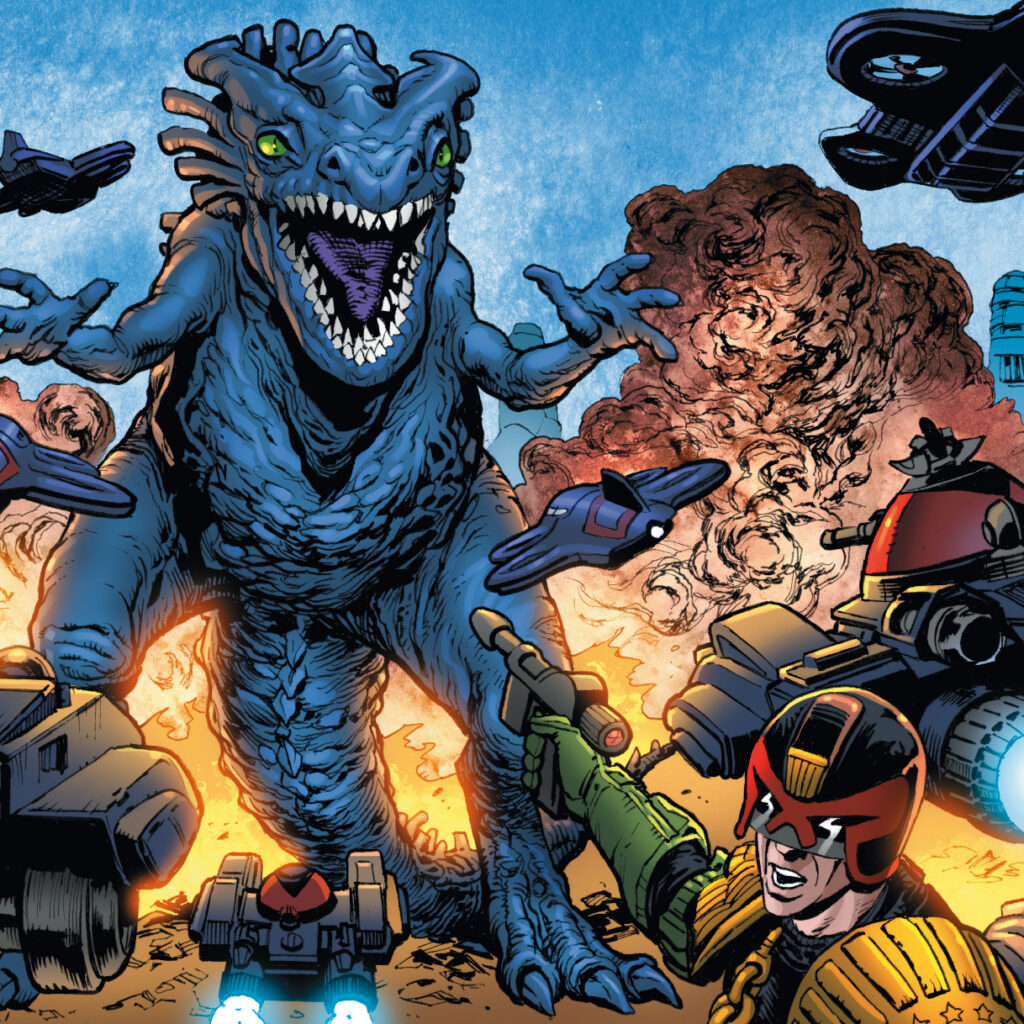 2000 AD Prog 2030 is out right now, featuring the 2000 AD Regened, a celebration of all your favourite characters, with an all-ages twist, perfect for readers new and old, but especially for those younger Earthlets who haven’t discovered the Galaxy’s Greatest source of thrill-power!

One very special strip in the 48-page special Regened is Cadet Dredd, with Chris Weston on writing and art duties. Last year he faced off against Velociraptors, this year it’s an even more problematic prehistoric menace in Cadet Dredd vs Grudzilla! We caught up with Chris to talk about Cadet Dredd, dinosaurs, and the fun of a good poop gag…

Chris, you’re the writer and artist on Cadet Dredd in the special 2000 AD Prog 2030, the all-ages issue, effectively a follow up to last year’s free comic book day special 2000 AD Regened. In that FCBD Special, we saw Matt Smith and Neil Googe delivering the first tale of Cadet Dredd, everyone’s favourite lawman as a boy, wearing the white helmet of a cadet and dealing out justice to a rowdy crowd and keeping a pack of Velociraptors in check! This time, you’re doing Cadet Dredd versus Grudzilla… what is it about giant monsters and were you just wanting to up the ante from last time? They did veloceraptors, you do Grudzilla? it’s all just about creators loving putting huge monsters into the comics, isn’t it?

Chris Weston: Absolutely! Who doesn’t love Giant Monsters?! The idea for this story came after I saw the American 2014 Godzilla remake and was less than impressed. I thought it was really boring and hated the way it kept cutting away from the action. That’s not what I want when I pay money to see Giant Monster movies; I want ninety minutes of utter mayhem and destruction! The subject of “Giant Monsters”has always raised a lot of questions in me; questions like: what happens when they poo? What if someone got swallowed whole by a “Giant Monster”? How long would they survive?

What’s your tale all about? Aside from Cadet Dredd beating up on Grudzilla!

CW: Our story  opens with “Grudzilla” rising out of the Black Atlantic and heading straight for Mega-City One!But don’t worry: he’s not bent on havoc and destruction. Grudzilla is actually the star of his own long-running monster-movie franchise and they are going to be filming the latest installment in The Big Meg! Within Grudzilla’s genetically-modified and enlarged lizard body is the transplanted brain of Hondo-Cit’s most dedicated method actor, Ho-HoMesoddo! Unfortunately, he has a monster-sized ego to match his form… and he throws a massive destructive hissy-fit after Cadet Rico criticises his acting!

Chaos ensues! Rico gets swallowed-whole by this monstrous diva and only Cadet Dredd can save the day with the assistance of the particularly repellent riot-control measure known as “The Brown Note”. Google it.

We did. And now our imagination is filled with the sort of giant dino images we simply cannot unsee. Thanks Chris! Putting poop gags to one side for a moment… Is this the same Cadet Dredd as we saw in that first adventure in 2018’s Regened Special?

CW: Yes. And the beauty of telling a story in this timeframe is you can also bring in his clone-brother, Rico. His slightly more cynical, streetwise persona provides a nice counter-point to Dredd’s more stoic outlook. You can put in little hints of the character traits that eventually lead to Rico’s tragic demise, which is fun.

Neil Googe was the artist on that first Cadet Dredd adventure, responsible for a lot of the design of this new, younger Dredd. He talked about bringing in a slightly more modern look but sticking to the existing uniform.

CW: Hah! I completely ignored that, and drew Cadet Dredd’s uniform in a completely retro-style, exactly the way Carlos Ezquerra designed it in 1977! Firstly, because I love that original version and had been dying to draw it for years; secondly, because I was still mourning the passing of Carlos when I drew this story and I wanted it to be another tribute to the great man; and finally because I want the costume differences to be canon, at least in my stories. It helps establish that this tale is set firmly in the past.

I don’t think you’ll be offended if I say that you and Neil have hugely different styles and I was wondering what sort of look you’ll be going for?

CW: I love Neil’s artwork! It’s so dynamic! I only wish I could draw as vibrantly as he does. That’s not my “thing” though…I’m your nitty-gritty, too-much-detail artist… so I may as well embrace whatever it is I do well. This story really leans into that: it’s crammed full of crumbling city-blocks, exploding Manta-tanks, crashing H-Wagons! I was trying to channel the spirit of Mike McMahon’s Block War stories, with all the action on an epic scale. The script-writer didn’t exactly make my job easy, curse him!

This is now the second outing for the young adventures of everyone’s favourite Judge, what are the chances of more Cadet Dredd from you?

CW: I don’t know. I guess we’ll have to see what the readers make of it. It might be nice to do one every year.Then, eventually, they can collect them all together in a big book.

It seems to me that there’s a huge amount of potential in the character for younger readers. Part of this is the brilliant simplicity of the character and the relative lack of continuity knowledge needed for readers to get into the character and the strips. What other characters would you love to see in an all-ages 2000 AD? If you could pitch one story, what would it be for you?

CW: Ooh, good question. I think a young Torquemada story could be fun; showing the rise to power of the evil tyrant. It could be have an element of  “Game of Thrones” about it, with all the internecine intrigue within his family. You could show him cruelly disposing of his rivals; all the despicable deeds he’d perform to become The Leader of The Tube Police. And Nemesis would be there, in the background, waiting…

Oh, I want to draw this now!

Finally, with Regened and Prog 2030, we’re seeing 2000 AD extend an invitation to younger readers. Obviously, it’s a good idea, as getting new readers in at a young age makes for a far healthier comics industry long-term… what are your thoughts on getting a new generation of readers into 2000 AD?

CW: I like the idea of bringing younger readers in, but you have to be pretty careful you don’t talk down to them in the process. Kids know instantly when they are being patronised. I like films like “How To Train Your Dragon” which can be enjoyed by people of all ages. The trick is to write something from the heart; I think younger readers really respond to that. All the stories that made an impact on me as a young reader were the ones that moved me in some way. But on the other hand, kids can respond well to more puerile material! They can appreciate a good fart joke more heartily than us repressed adults! There’s an element of this in my “Grudzilla” story where I tackle the subject of a Giant Monster’s bowel movements. Don’t panic, though: it’s all done in the WORST possible taste!