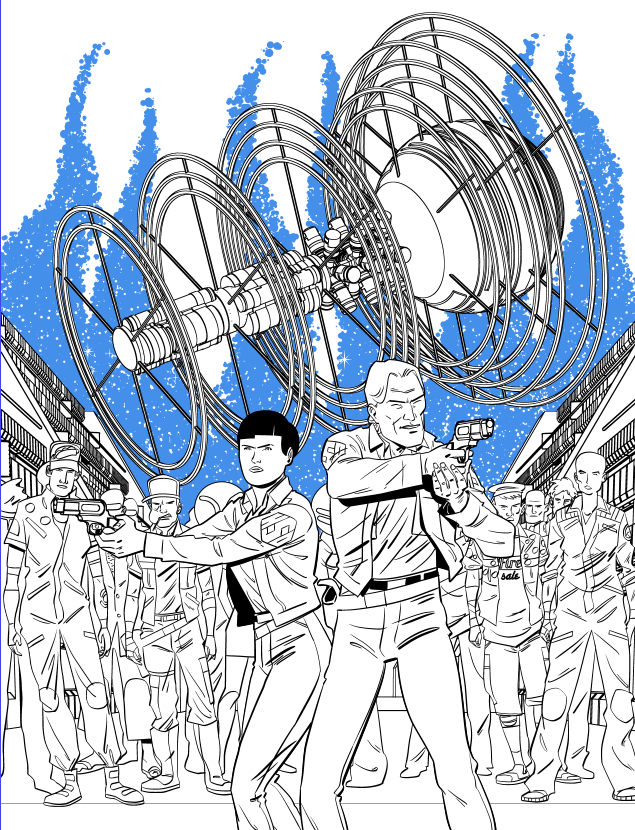 This futuristic, police-based procedural sees cops Carl Brinkman and Bridget Kurtis investigating drug crime and murder on the Odette Habitat – a festering space station inhabited by all manner of oddbods, addicts and cultists following the evacuation of Earth.

Following his runaway success on Brass Sun, the Culbard droid is bringing his unique world building skills to this new, deeply unsettling tale. Ian was kind enough to give me the rundown on his first two stunning covers to date, he said…

“Below is the initial rough sketch working from a brief set by Tharg which read “The two investigators in the foreground, with the habitat behind them and something vaguely Lovecraftian and menacing in the spacey backdrop”. So, with the latter part of the brief, and given the nature of the series, I went for cosmic tentacles. Not so much menacing as just, vast. I’ve done a fair bit of Lovecraftian stuff before, and for this series particularly, the kind of vague Lovecraftian vibe is more like an aurora borealis. An amazing light show, but in reality you’re looking at a solar storm battering our planet’s atmosphere and that’s actually pretty scary. On a far grander more cosmological scale, the sort of scale befitting anything Lovecraftian, if you could imagine the Horsehead Nebula, utterly beautiful and serene, now imagine that destroying everything in its path. Hence, cosmic tentacles…”

Oh dear, the Culbard droid has leaked oil all over his work…

He continues “I did at one point include a more detailed and populated background, but it was decided that that it looked too busy and took away from the focus, which at launch really needed to be the two main protagonists. Going back to what I was saying about the Horsehead Nebula, that influenced a good real of colour for the cosmos.”

“For the second cover I did a really quick rough sketch to Tharg’s brief which I don’t have to hand but it was something along the lines of Bridge falling down a rabbit hole so I did just that, with Bridge, gun in hand, falling backward down the piped corridors of the habitat ventilation system, with cultist’s arms poking through to grab her. Initially I had Anish’s drive system behind her but that ended up just complicating the image so I left it out but retained the red from the environment in which we first encounter Anish…”

“Tharg felt it looked like Bridge was floating towards us and suggested I draw her falling backwards, arms and legs flailing. He also wanted some sect graffiti on the pipe work, all of which led to the final image. Always loved that bike chase sequence in Akira where you get the tail lights streaking, so I decided to have that coming from the magazine light on Bridge’s gun!”

All of which brings us up to speed with the world of Brink! A huge, HUGE thanks to INJ Culbard for sending the info and circuit scrambling images! Grud only knows how this twisted tale is going to end but I’m however it does, I’m hooked!