Neil Roberts unwraps the secrets of his amazing cover of Prog 2040! 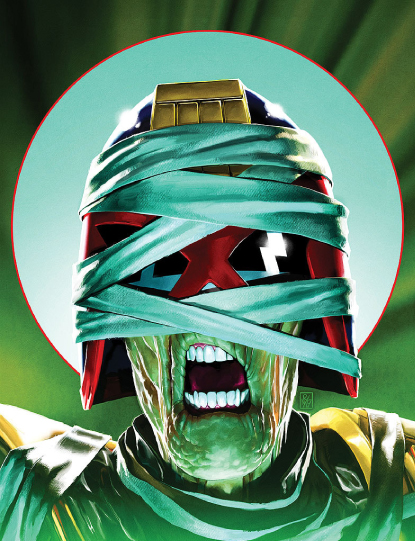 Prog 2040 see’s Dredd battling the Undead as he takes on a fearsome Mummy!

Who better than well known Mummy’s boy Neil Roberts to come up with the goods for an awesome cover? Over to Neil to tell us more…

“First off was the brief from Tharg, he wanted “Dredd/ Mummy – his face is dessicated/ mummified and his bandages are unwrapping.” I’m paraphrasing, but that’s the general idea. Then I sketched up some thumbnails:”

“Above: Idea #1, my first response to the brief, trying to get all the elements into the composition…”

The Academy tradition of wrapping newbies up in toilet roll and flushing their heads down the lavvy.

“Above: Idea #2, riffing on my initial thoughts, playing with colours, background and pose.”

“Let’s do the Timewarp agaiiiiiiin!”

“Above: Idea #3, trying something a bit different, but maintaining the required elements.
I mailed those to Tharg, who requested a revised version of Idea #2, with a more direct gaze at the reader. So, I quickly drew another thumbnail…:”

The state parcels marked ‘Fragile’ arrive at your house, when sent by certain postal companies…

“…which Tharg approved! Then I was off – painting Dredd-as-a-Mummy! So, here’s the finished piece:”

(King) Tut tut Dredd. Just too wrapped up in yourself…

Pyramid sized thanks to Neil for sending the images, it’s always wonderful to see his work on the Prog!