The making of Richard Elson's brilliant take on the Traitor General! 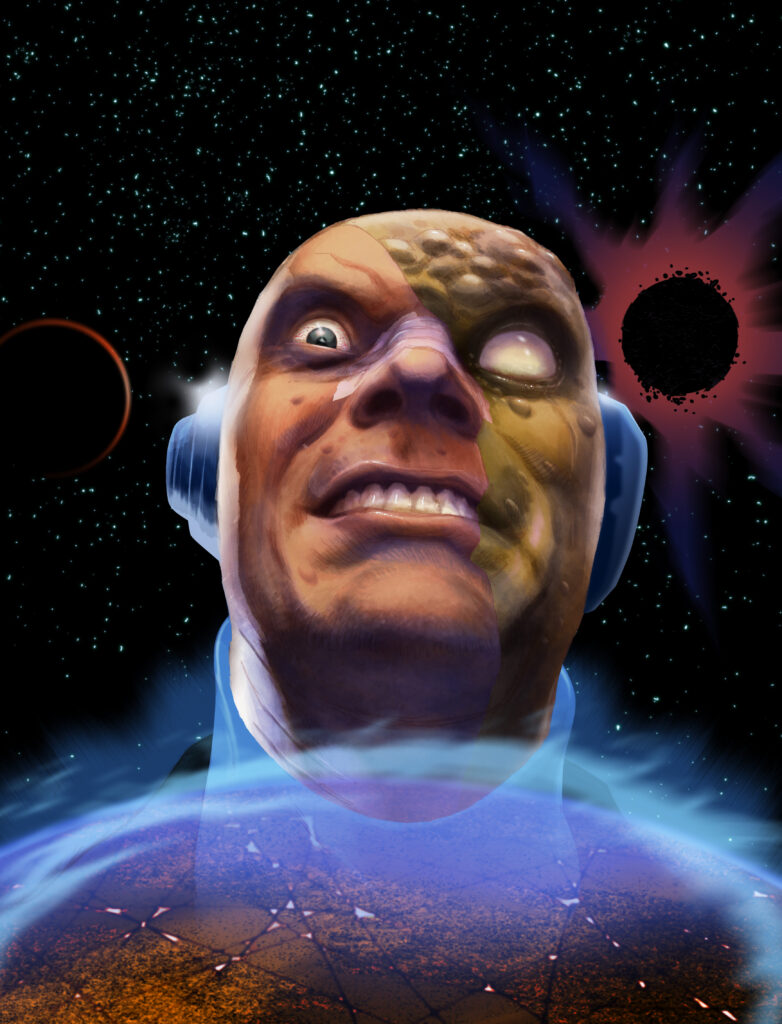 Behold, the most hated individual on Nu-Earth and beyond, brought to us by the brilliant Richard Elson. This zarjaz cover of Prog 2034, which contains part two of the current Hunted arc, Furies, shows the Machiavellian monster desperately plotting and scheming to keep one step ahead his ever increasing number of enemies. Insert your own timely politician joke here Earthlets!

While no less scrotnig, the digitally painted cover is quite a departure for the Elson droid, whose work normally features bolder, cleaner linework. I asked Rich about this, he said “Yeah, it is different; I’ve had a few attempts at digital painting now and I keep coming up against the same problems. I think I need a different approach. I used a ridiculous 54 layers and 10 channels on this one!” Well I for one say it’s worth it, when the results are this striking!

I asked Rich to take us through the creation of the cover and he very kindly sent a tonne of images. He said “Series artist PJ Holden kindly gave me some background information and provided extra refs of his work on the strip – that was a big help in working out what has been going on with the TG’s face since we last saw him!” Yes, the poor bloke wouldn’t win many beauty contests would he?

“And here a scaled up version of the chosen rough.”

The Traitor General prepares to tuck into a giant meatball.

TG was never a very good teacher, he only had one pupil!

TG was a big fan of The Phantom of the Opera.

“In the next two images you can see me working up the skin tones. First the left side…”

TG loved pampering the right side of his face with a nice mud pack.

TG has had his Ready Brek!

“With the skin tones done, I begin adding a few details and lighting…”

Try the Milli-Com Nazeaway – Gets rid of unsightly nasal and ear hair fast!

“Now I begin adding in the background.”

During his brief, ill-conceived foray into stand up comedy, it was the rotten tomato that finally made the Traitor General storm off stage.

Rich continues “Then I go back to more skin tone work.”

Erm… remember folks, it’s what’s on the inside that counts!?!

“Next I take on his clothes and recolour the unreconstructed half of his face.”

It was cold in space so TG’s mam made sure he wore his turtle neck sweater.

Finally, an alternative version of the image used on your Prog. Rich explains “The last stage was adding in the planets and black hole. I just realised, I actually didn’t submit this one in the end. I went for a less transparent Nu-Earth as I thought there would probably be a caption over that area and it might be difficult to read if the planet wasn’t so clear. Now that I look at it again, all I can see is the things I didn’t do that I should have done, so I’d better file that one away for a bit before it really starts pissing me off!”

I’m sure you’ll agree that Rich shouldn’t worry and the cover looks amazing on the Prog!

Many, many thanks to Rich for sending the images and run down for the cover. It’s a fantastic painting that really encapsulates this awesomely disgusting character!