The making of Brendan McCarthy's eye melting cover of Prog 2033 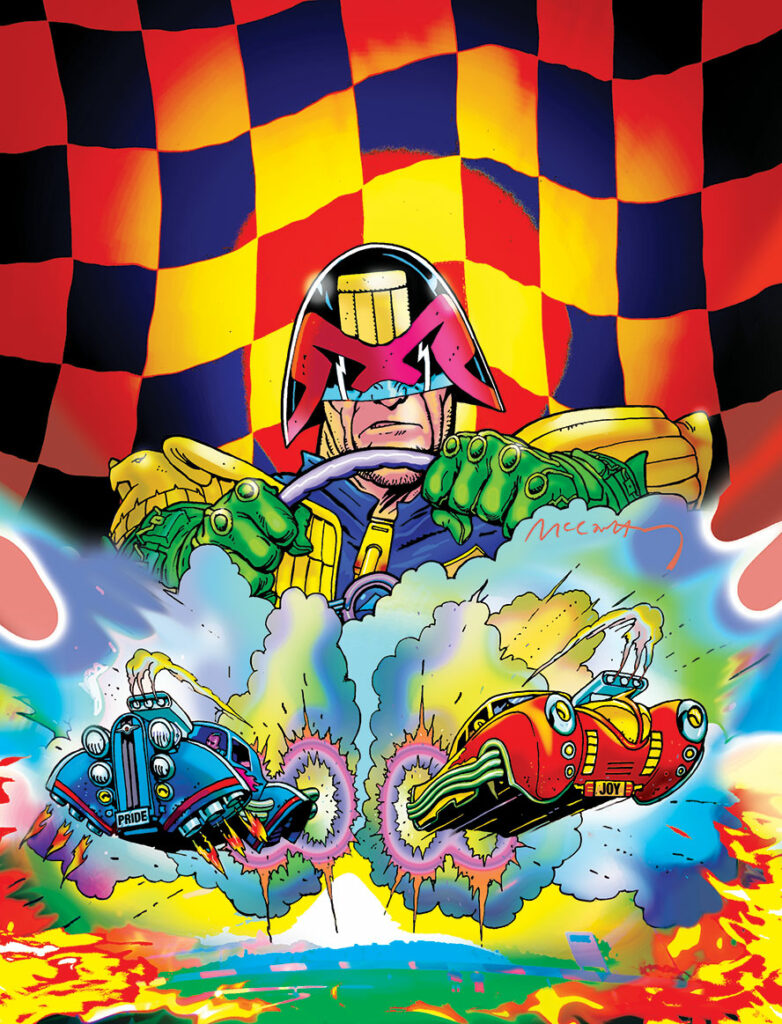 Praise be, as the mighty Brendan McCarthy returned to Prog 2032 for the high octane Dredd tale, Hoverods! The maestro of mutie motor mania, who many will know was the co-writer and designer of 2015’s excellent Mad Max: Fury Road movie, brings us an explosive vision of carmageddon on the cover of Prog 2033!

The Hoverods strip focuses on a group of wayward juves who are taking part in an illegal drag race in the Cursed Earth against the immoral pertol head, Sick Pete. What could possibly go wrong?

As ever, Brendan blows our circuits with his unique ‘Digidelic’ style, which, of course, fits perfectly with the crazy, unpredictability of the Cursed Earth and its villainous denizens!

Below we see Brendan’s sketch for the cover – I love the energy that bursts from the image and the cool suggestions for taglines – ‘Go Dredd Go’ indeed!

Dredd grimaces as his Hoveroids give him gip again…

Brendan says the cover was ‘Based on the early poster for Death Race 2000, the Carradine one‘ which Squaxx will know was part of the inspiration for the look of Judge Dredd himself.

Frankenstein took a shortcut through the doughnut shop.

I asked Brendan about his co-colourist for the strip, having spotted Dom Regan in the credits box in the Prog. It seemed odd to me that a colourist would be used on such a distinctive artists’ work, let alone be expected to get onto the head of someone with such a strong sense of style! Brendan said “Dom coloured episode 2 of Hoverods. I then went over it and tweaked stuff and turned it more ‘digidelic’!”

Below is a finished version of the cover – Eagle-eyed readers will notice that this is an alternative version of the published cover, can you spot the difference?

And there we have it, an inspired choice of artist for an excellent Dredd tale! As Brendan himself says “After Mad Max, I guess I’ll be the go to ‘Hoverods’ artist!” Well, there’s no argument from us on that score!

Huge thanks to Brendan for sending the images, be sure to visit his site here: http://artbrendan.com/