The making of a monster, by Chris Weston. 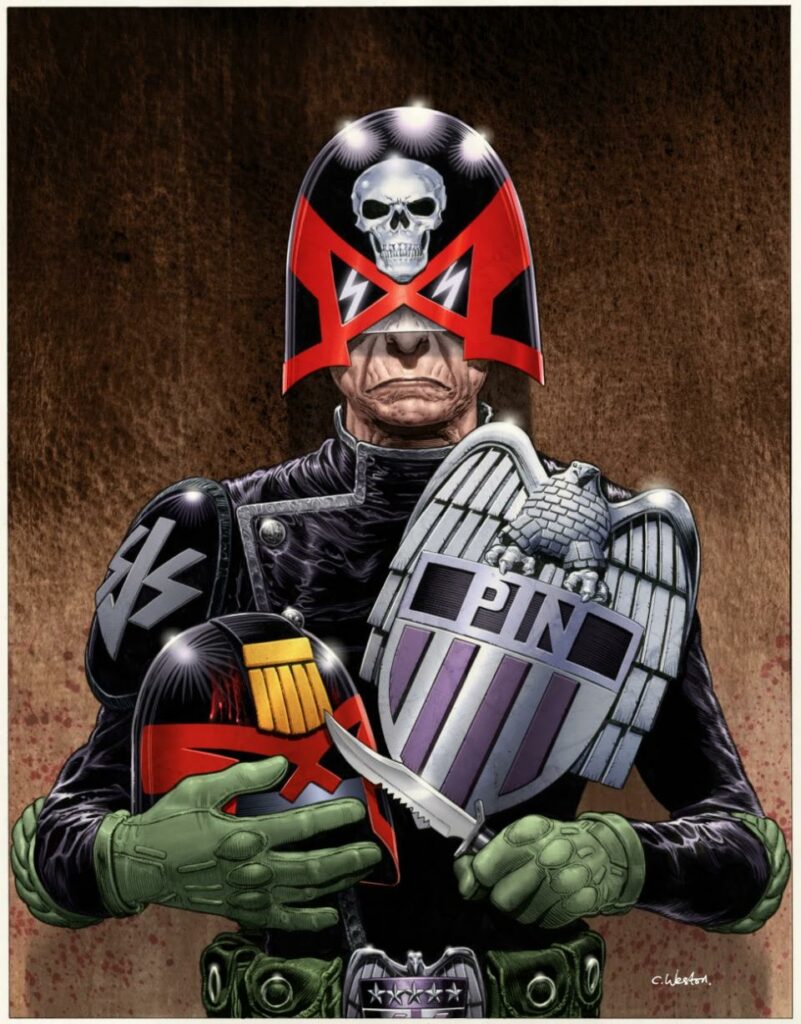 Who judges the judges that judge the judges, eh? I don’t know but they ruddy well need to have a look at Judge Pin! This highly strung SJS judge is currently performing her role with just a little too much zeal, murderously judging those she feels don’t live up to the badge! Will pin be a thorn in Dredd’s side?

This fantastic new character has been brought to us by Rob Williams and phenomenal series artist, Chris Weston in the new Dredd thriller, The Fields.

I asked Chris to talk us through the creation of this terrifying cover, he said “Tharg provided the artistic brief: “Something quite sparse – a creepy, spot lit image of Pin holding a bloody knife in one hand, and a Judge’s helmet in the other. “

(Incidentally this marks my third 2000ad cover to feature a large figure-shot of a character with a knife: see also my Indigo Prime Ripper cover and Rogue Trooper cover from over twenty years ago. The trilogy is complete!)”

I’ve put together the blade trillogy below, it’s a nice representation of Chris’ artistic development. Those other two covers are 26 and 23 years old!

Chris continues “The first thing to do was get my reference material, which meant my wife once again reluctantly posing for a photograph. But I think it’s great that Karen is gracing the cover of the Galaxy’s Greatest Comic on the week of our 20th wedding anniversary! It seems appropriate!”

That time when Chris forgot his wedding anniversary…

Chris lets us know a little about the ‘inspiration’ for this nasty little character “With my reference in hand, I then produced a prelim of Judge Pin in all her murderous glory. I “May” have looked at some photos of a prominent politician for more inspiration…
Possibly one known for making dramatic “cuts” to the police force, who can say? We all know S.J.S stands for Strong, Just and Stable, right?” I don’t know what he’s talking about…

Next Chris looked at colour choices for the uniform; “I wasn’t entirely sure what colours the SJS ere sporting these days, so I provided Tharg with a couple off choices to pick from. I really liked the blue trim on the helmet, but that was too much of a departure from previous continuity. Soon after this, Dylan Teague, THE colourist had turned in his finished work, and I felt it was better to stick to the colours he chose. They were a combination of the two roughs I supplied anyway, so it was no hardship.”

“With the rough approved by Tharg, I then proceeded to ink up a tighter version of the figure. These days I scan the art in full colour and don’t bother to bitmap or threshold the image because I like the paper textures and the brush-strokes to be visible on the printed page. It gives it a more organic hand-produced quality.”

Next Chris begins to digitally colour the image “I then produced a layer made up of flat colours, which I use as way of selecting the desired areas I wish to colour. I actually quite like the look of this flat, coloured art. It looks like something out of a European comic book. One day I may just do a strip in this style.” Yes! Yes! Yes!

Chris is very talented in the art of flatulence

“Now I just began the process of modelling the figure in Photoshop; building up the colours to produce shade or subtracting them to make highlights.”

Until finally the image is complete “Eventually, I look up at my clock and realise I’ve spent far too long on the job, and for the sake of my own bank balance, I should knock it on the head and move on to the next assignment!”

She has such pleasures to show you.

Phew! There we have it, one of the most sinister covers to feature on the Prog for a long time! Huge, huge thanks to Chris (and poor Karen!) for the images and excellent commentary, both social and artistic!

Chris is truly one of the 2000AD greats and it’s always an event when he appears in and on the Prog. I’m very excited (and a little bit scared) to find out more about Judge Pin, how will she feature in Dredd’s future?