Ben Willsher brings the stakdown on the cover of Prog 2003! 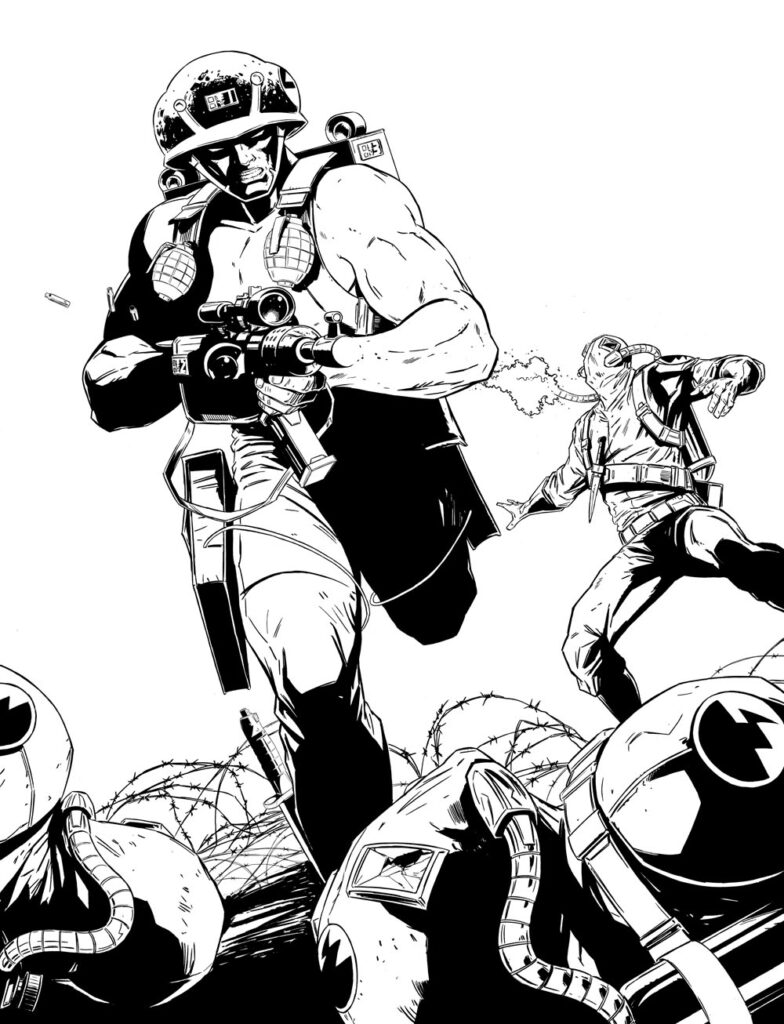 Stak! Ben Willsher blasts through the chem clouds with this absolute monster of a cover! As a long term fan of Rogue, it was a dream come true for Ben and you can see the love on the page, it’s brilliant!

Ben was kind enough to send his thoughts behind the cover and tell us the story behind its conception. He said “This Rogue cover came about when Tharg asked if I’d be interested… Well, I nearly bit his green hand off! I’ve only ever drawn Rogue once before (well, unless you count all those doodles in the back of my Maths prep book (which my teachers never did!)) That illustration was for a poster for an end of year prog – over to P-WLS for some visual reference and Prog number.”

Ben continues “Tharg had a strong idea of what he wanted- That being shot of him racing towards us leaving dead Norts in his wake. I was provided with this lovely black and white Page care of PJ… Holden, not Maybe!”

Just another day at the office for Rogue and the guys.

Ben wanted to fill some pretty big boots and who can blame him? He’s doing a stakking Rogie Trooper cover! “As soon as he suggested this concept, I knew exactly what I wanted to do – I wanted to try and create something that had that same raw energy that Dave Gibbons captured in his classic 1981 cover for Prog 228. Not that I am comparing myself in anyway, you understand, but I really wanted to try and tap into that action Dave so beautifully delivered.”

“Where as normally I would do very rough thumbnail sketches and then produce a better quality rough for Tharg to give me either the Quaxxann thumbs up, or a kick in the Galactic groats and told to come back with something new. This time the image being so clear in my head I went straight to this more detailed rough stage. Loosely pencilling first on A4 paper, then going over those outlines with a biro and Marker, with a blue pencil line rough logo to set the layout.”

“Tharg liked it and gave me the go ahead.”

“I drew the piece on an A3 piece of heavyweight card with black drawing ink.” Good Grud, I’d LOVE to see this in the flesh!

“You can’t catch me, I’m the Genetic Infantryman!”

“Afterwards, I coloured it, and painted in the explosion smoke FX.”

I’m a huge fan of Ben’s work and his colouring is always amazing. This is his second Toxic Gas cover (see the making of Prog 1768 here: Prog 1768 ) which I think says a lot about him…

Ben continues “As you can see from the Black and white image I discarded the line drawn smoke coming from the Nort’s broken pipe in favour of a more natural looking smoke effect. I also added better Biochips.”

Stak! Rogue’s back! On the Attack! I’m gonna cack!

Huge, huge thanks to Ben for sending the files and write up. I love him to Nu-Earth and back!