Nick Percival gives us the willies with his Dark Dominion Delights! 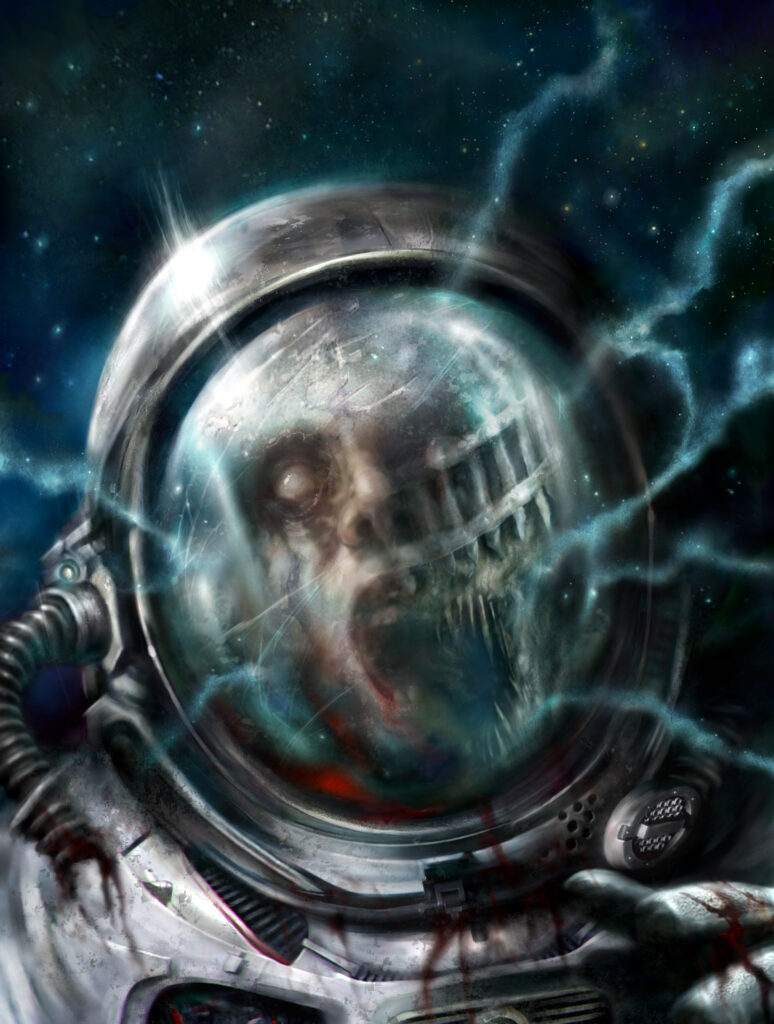 Prepare for jussstice as Judge Death and his twisted cronies return to the Judge Dredd Megazine in the terrifying sequel to Dark Justice, Dark Dominion. There aren’t many artists who could follow in the footsteps of Dark Justice artist Greg Staples, however, the master of horror and decay himself, Mr Nick Percival, is more than up to the task!

When we last saw the Dark Judges, three of the fearsome four were cast adrift in the cold vacuum of space, never to trouble the city again. Surely not even the Dark Judges can come back from that…?

I asked Nick to tell us a bit about his incredible cover, and he was kind enought to send two images – a teaser image and the cover itself. He said “The teaser image was fun to do, since I pretty much did this for myself just to get into the mood for the storyline. John Wagner and I had been emailing each other sporadically over about six months since he proposed the Dark Judges idea to me, so I initially worked up some concept paintings of each Dark Judge and how I’d approach the look of them for the series. As with most artists, you want to put your own spin on it and I didn’t want to really repeat too much of what had been done before but they obviously still had to be recognisable as the Dark Judges. As you’ll see in the series, they do have a bit of a different feel to them visually. I then put together this teaser painting for the series which they used in 2000AD and online to announce the story.”

“The first cover painting is again a bit of a tease, since we only get a glimpse of Judge Death in the reflection of the doomed astronaut’s visor. The story begins in deep space where the Dark Judges have been slowly decaying and floating around now for a considerable amount of time, so it seemed a good idea to focus on this element as a warning of what is to come for some of the new characters in the series.”

“It’s been great to finally work with John and he’s been very open to some ideas I had and incorporated them into the plot which is very nice of him. The Dark Judges are extremely violent and evil in ‘Dominion’ – there’s a feel of the movies, ‘The Thing’ and ‘Aliens’ throughout but with a lot of twists and surprises along the way. The ‘Sentence is Death’ runs strong in this one…”

Wow! A huge thanks to Nick for sending the images and write up, I can’t wait to see what ghastly goings on those twisted ghouls get up to this time!