Back the Judge Dredd roleplaying game on Kickstarter now! 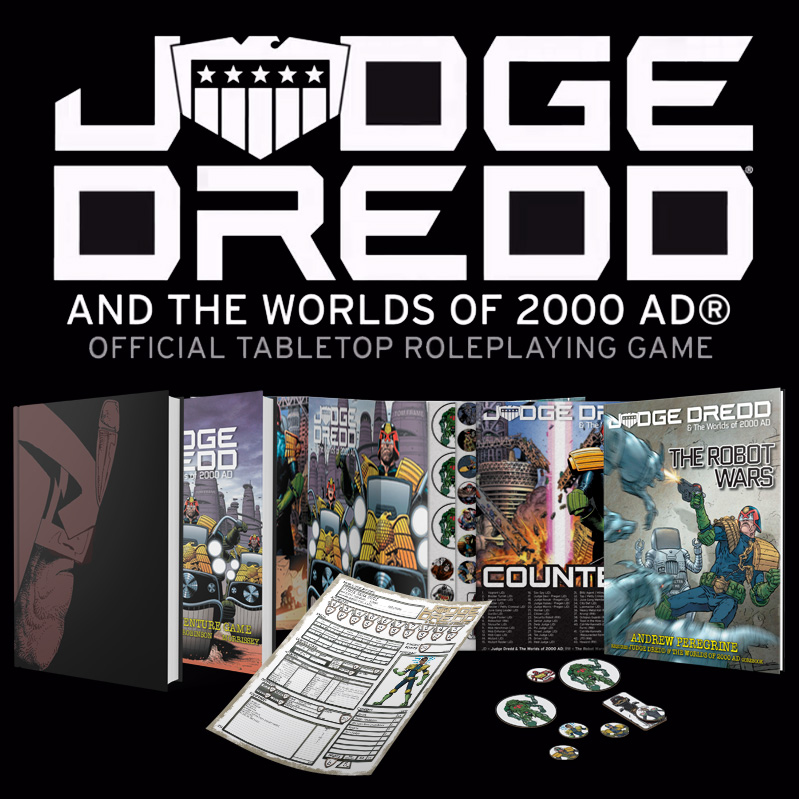 Last year, Rebellion and 2000 AD announced the exciting news that EN Publishing were developing the Judge Dredd & The Worlds of 2000 AD Roleplaying Game.

EN are planning a whole range of thrill-power packed tabletop adventure games and supplements based on the incredible, iconic, and frankly, incendiary characters you know and love from the pages of the Galaxy’s Greatest Comic, starting with the legendary Lawman himself, Judge Dredd.

Richard Bruton sat down to chat with owner of EN Publishing, Russ Morrissey.

The Kickstarter for Judge Dredd & The Worlds of 2000 AD Roleplaying Game is now live, with the hardcover core rulebook up for grabs, plus a limited edition alternate cover core rulebook, a GM screen, The Robot Wars, and some special Dredd counters!

You can find more information before the launch of the Kickstarter campaign from worldsof2000adrpg.com.

Russ, you’ve launched the Kickstarter for the first Worlds of 2000 AD role-playing game. Readers know full well just how great the world of 2000 AD is, but what are your plans for bringing the thrill-power of the comics to the world of RPGs?

Russ Morrissey: We’re starting with a gorgeous full-colour core rulebook, which will be your gateway to the many worlds of 2000 AD. This book will be focused on Mega-City One, but will be followed by supplements which delve into other properties such as Rogue Trooper, ABC Warriors, Nemesis the Warlock, Absalom, and many more!

2000 AD is a wonderful property in that it contains so many different worlds that it allows us to play in a wide array of genres, from dystopian sci-fi to Celtic fantasy to modern-day horror. It’s the perfect sandbox for an RPG developer, because there’s so much to work with, and so many different flavours to choose from! Of course, everybody has their favourites, and hopefully we’ll be able to cover your favourite, but the sheer scope and variety available is breathtaking!

For those readers not familiar with the ideas/concepts of tabletop RPG, can you give us some insight into what the game will be like?

RM: So, a tabletop RPG is a game where each player creates a character, and then plays that character through various adventures. One player, called the “Game Master” describes the situations which the characters find themselves in, and the players describe what they are doing to resolve that situation. That may involve dice rolls to determine whether or not the character is successful.

For example, if a player is playing a Judge, the GM might describe a perp attempting to gun her down. The player might say “I draw my Lawgiver, switch to hi-ex rounds, and fire at the perp’s motorcycle!” — she would then roll some dice, which would determine whether or not she hit the perp’s bike or missed. The GM would then continue with the narration.

What characters will be playable in this first game?

RM: Initially, there are Humans, Clones, Robots, Mutants, Chimps, Gorillas, and Orang-utans available; as well as a choice of Judge, Perp, and Civilian careers.

It was important to us to include non-Judge characters. While a mixed group might be hard to imagine in the world of Judge Dredd, in a city the size of Mega-City One there’s loads of scope to tell the tales of the ‘normal’ (in as much as one can be normal in that city!) folk. Perhaps you are a group of civilians defending your block from a gang of perps, or perhaps you are a group of perps doing a bank job, hoping no Judge passes by…

The world of RPG might seem a little daunting to some, with images of huge rulebooks and incredibly complex playing systems needing hours of study before diving into the excitement. Can you give rookies to the exciting world of tabletop gaming an insight into how easy it will be for them to get off and running with the Judge Dredd RPG?

RM: Oh, it won’t be hard at all! We have pre-generated characters for you to use, and a simple introductory adventure called “State of the Empire” in the core rulebook, all designed to get you playing in no time! You can use those for your first try, and then delve into making your own characters later.

We also have tools you can use — an online character builder, a monster builder, and a video tutorial on how to create a character, and we plan to have a weekly live streamed game where you can watch pro RPGers and learn how to do it from them!

The world of Dredd is vast, with so many incredible stories across the 40+ year history of the comics. This first Dredd game release is going to be ‘The Robot Wars’, which was the first big Dredd storyline in the character’s history, way way back in 1977, written by Dredd’s co-creator John Wagner. How did you decide on this as your starting point?

RM: Dredd is the best known of all the 2000 AD characters, and so was the obvious place to start — the “gateway” character. While Dredd himself has been covered before in tabletop RPGs, we’ll quickly move on to other stories and character and settings. But it made sense to start with the big man himself!

The book contains not just two adventures – one for Judges, one for Perps/Civilians, it also contains discussion on the role of Robots in Mega-City One’s society, the ways in which they are viewed and treated, and a look at the Three Laws of Robotics which govern their behaviour. And, of course, that iconic opening scene of The Robot Wars, where Robots at the Robot of the Year show are being ordered to their deaths will evolve before the players’ very eyes.

And, perhaps most important of all, does this mean we’ll see Walter the robot in the game?

RM: Yes, indeed! He’s a non-player character who the players can meet. In fact, I’ve been running the game on Thursday nights, and I’m still trying to get his voice right….

Walter can assist the players in their mission to stop Call-Me-Kenneth. I don’t want to go into too many spoilers, but those who have read the comic-book storyline will have a good idea of his role in the adventure.

How will the game play in The Robot Wars work?

RM: The book has several elements – it’s a sourcebook about Robots in the game, and is also an adventure to play through. First, we have expanded rules for Robot player characters — new modifications, flaws, careers, and so on.

Then we have two adventures. The first is called The Robot Wars, and deals with player Judges and their battle against Call-Me Kenneth. The second is called Saving Matt Damon Block, and deals with civilian character trying to save their city block against the Robot uprising. You can play through either or both of those adventures, or simply use them as source material for your own adventures.

Finally, we also provide short one-page snapshots of smaller adventures torn from the comic, which aren’t multi-issue story arcs like The Robot Wars, but which take place in the early progs. So players can meet the Brothers of Darkness, Frankenstein 2, or Krong!

Future books in the Judge Dredd & The Worlds of 2000 AD game are going to focus on different eras of Dredd. Can you give us some idea of what storylines we can look forward to in the future?

RM: I don’t think we’re allowed to discuss that yet! But suffice it to say we plan to delve into plenty of 2000 AD’s many characters and settings. We want to play in different genres, so expect to see fantasy, horror, sci-fi, and more!

What will the publication schedule be like for these future books?

RM: We can’t reveal too much of what’s happening, but I can say that two Dredd storylines – Luna-1 and The Cursed Earth – are already written. You can expect to see those in the months following launch of the core game.

The core rule book for the game is designed to be playable for many different characters that readers have seen in 2000 AD, not just Judge Dredd adventures. How will this expansion work?

RM: So Judge Dredd & The Worlds of 2000 AD is the core rulebook. You’ll need that one. Then each different ‘setting’ will be a supplemental book which expands on those core rules. The core rulebook contains the basic rules of the game, while those supplements will describe new worlds and new characters, and offer new careers and places and monsters and adventures.

Just as with comics, the tabletop gaming world has been often misrepresented and maligned. But, in the last few years, we’ve seen increased interest and popularity of tabletop gaming. What is it that makes modern tabletop gaming increasingly popular?

RM: Two things. One is the phenomenal success of Dungeons & Dragons‘ 5th Edition; the second is the live streaming of those games by celebrities, actors, and comedians. These days, a show like Critical Role – which is a group of voice actors playing D&D – can sell out a large theatre. Ten years ago, nobody could have imagines that people would turn out in their thousands to watch a D&D game being played live.

Of course, the mainstreaming of geek culture has helped enormously. Isn’t it amazing that we now live in an era where we’re spoilt for choice for superhero movies? And those movies are not niche, they’re mainstream. Game of Thrones is massive. The Lord of the Rings movies did so well. Star Wars is back. D&D features in Stranger Things and The Big Bang Theory. There’s even a Mega-City One TV show in the works!

Do you think the image of gaming is changing for the better?

RM: I do. It’s lost most of its stigma, with the help of cool US celebrities who show us all that geekdom is fun and fashionable. The hobby is growing in size every year — in the last few years it has more than doubled in size, and it’s not slowing down.

There’s a large team working on the game. Were they all 2000 AD and comic fans before working on this project?

RM: Speaking for myself, absolutely. I’ve been reading comics since I was a kid, and 2000 AD was very well represented! The lead writer of the core rulebook, Darren Pearce, is a MASSIVE 2000 AD fan! When we approached him and asked if he wanted to work on the project, he literally squealed! And Nick Robinson, one of the other writers of the core book, is a veritable Dredd encyclopaedia. If we ever needed to know an obscure fact, it was at his fingertips.

How has the collaboration with Rebellion worked?

RM: It’s been a wonderful, cooperative process. We’ve found Rebellion super-supportive of everything we want to do, and we’re so grateful that they trusted us with their worlds and characters. They’ve offered valuable feedback at each stage of the process, from initial pitches to manuscripts, art, and final products; and they’ve made the entire 2000 AD art archive available to us, enabling us to produce some truly beautiful books.

And just what does it means to be involved with bringing the world of 2000 AD and Dredd to RPG?

RM: It’s quite a responsibility! We want to be faithful to these characters and worlds, while creating opportunities for players to interact with them. We’re very conscious of the trust that Rebellion has given us.

It’s also super-exciting! I literally cannot WAIT to get this game into peoples’ hands! We’re so proud of what we’ve done, and we just want to share it with the world!

Finally, when can 2000 AD and Dredd fans get their hands on the game?

RM: Our Kickstarter is now live! You’ll be able to back that and get the hardcover core rulebook, the limited edition alternate cover core rulebook, a GM screen, The Robot Wars, and some special Dredd counters! Head on over to worldsof2000adrpg.com for a countdown and more information!