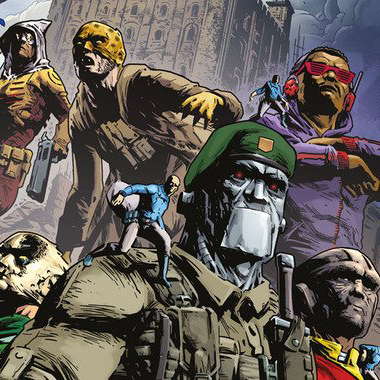 Lost in the mists of time, home-grown British superheroes once entertained and enthralled millions of kids…

Now, the likes of Adam Eterno, Blake Edmonds, Thunderbolt the Avenger, and The Leopard from Lime Street are coming back to make summer 2018 blazing hot!

The Vigilant will be a special one-shot title this August which resurrects classic heroes from the Fleetway/IPC comics of the 1970s – reborn and updated for a new generation to enjoy!

Written by Simon Furman (Transformers) with art by Simon Coleby (Jaegir, Judge Dredd) and other guest creators, when the evil forces of Von Hoffman and Dr Mesmer team up and pluck the immortal Adam Eterno from the winds of time, all of reality is under threat!

Available from newsagents in the UK on 15th August, The Vigilant will also be available to order from comic book stores through Diamond Distribution in the May edition of Previews.