Meet the team behind the new return of the early years Equaliser dispensing pint-sized justice! 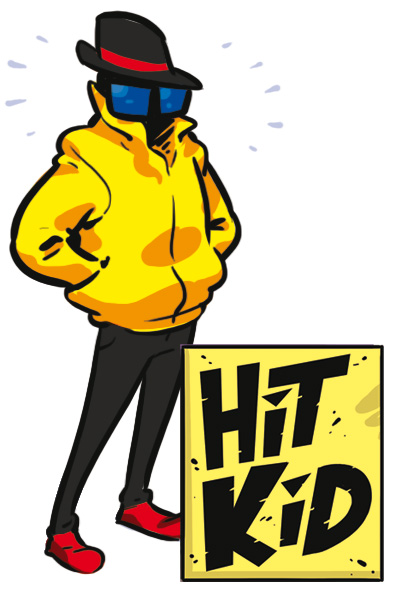 Prepare to guffaw and giggle your way through the all-new Cor!! & Buster Humour Special from the Treasury of British Comics – out now!

Taking the greatest comedy characters British comics has to offer, the new special bring old favourites into the 21st Century and is guaranteed to raise a smile!

Just one of the delights inside is the return of Hit Kid, the mysterious mini made man from Krazy comic, originally drawn by Sid Burgon. This early years Equaliser hired himself out to any kid with a problem, dispensing pint-sized justice with pop guns and catapults, and all for payment in cakes, sweets, and fizzy pop! Bringing this most bizarre idea back is Robin Etherington (one half of the Etherington Brothers) and newcomer Dave Follett.

Robin, Dave, you’re bringing back a lesser known character from Kraxy for the Cor!! & Buster Special, the under-age avenger, Hit Kid. Is he a character you remember well?

Robin Etherington: Yes, I get to reprise one of my favourite characters. [Editor] Keith Richardson approached us and offered a number of strips – that no one else had nabbed Hit Kid at that point is the best news I could have received! As a kid I had stacks of Cor and Buster next to my Beano’s and Dandy’s. I loved the mood of those comics – they were slightly more dangerous than the mainstream.

Dave Follett: I read what I could get my hands on down here in South Australia. The humour was a major draw card.

How did you approach a new Hit Kid? Was there any sense of trepidation about messing around with a childhood favourite?

RE: Not trepidation exactly. You want to do the best job possible, and evoke the same sense of playful fun that flew off the pages back in the day. I’ve worked on a lot of franchised strips so I have a good feeling when I find that sweet spot between the original voice and my own. Actually approaching the page was extremely straight-forward. I read as many old strips as I could get my hands on, then worked out how to make my sense of humour fit with the original. With only two pages to play with, it had to be lean, but that’s the real appeal of this type of tale.

DF: It would have been foolish to replicate the style exactly so I did my best to meet my own high expectations as Hit Kid was a real favourite when I was younger.

Is it the Hit Kid some of us remember so well, or have you brought your own twist to the character?

RE: I only really updated one aspect, and that was the identity of the main character himself. Hit Kid’s cause – protecting the innocent and serving justice to the bullies of the world – has not changed in the slightest. In fact, in the modern age, his mission feels more relevant than ever! But I had a new idea about WHO was behind the wayfarer’s.

DF: Pretty hard not to bring something new, it was staying close to the originals in spirit that was our aim in any case. We all still need Hit Kid in our daily lives

The Cor!! & Buster Special comes as part of the Treasury of British Comics, which has already seen some absolute lost gems brought back. What do you think of what’s been done thus far and what are you particularly looking forward to seeing?

RE: It’s a great lineup so far but there are a lot of phenomenal titles that need attention. Personally, it won’t be a true Treasury of British comics until OINK is collected into a single prestige volume featuring all 68 issues … and as that’s a former Fleetway title, I have high hopes! If they made a NEW issue of Oink, I’d happily throw my hat in the ring to write Rubbish Man…

DF: There was a semi regular half page mini strip in Buster called Kip the Kat (or something like it?!) about a sleeping cat that would be the bane of the owners. For some reason I loved it, for all its uneventfulness. Can’t find mention of it anywhere, so it’s probably nowhere near as good as I remember, but remember it fondly I do! But of course, there’s PLENTY of other creators’ works that I’d love to see more of.

An important aspect of the Cor!! & Buster Special is that it, hopefully, gets these classic humour characters in front of a new generation of kids. What are your thoughts on comics for children and how do you see things developing in the future?

RE: At the moment, everyone seems keen to promote comics as a reading medium. I have a lot of conversations with publishers who are looking to enter the market for the first time. The future is looking brighter by the minute.

DF: Finally, people are realising comics are a medium and not a genre, and the best way to foster the passion for this much maligned medium is to create more outstanding work for all readers, young and old. The sheer volume of comics and graphic novels that are available to read these days is phenomenal, you need only go to your nearest comic shop to see the variety and genres out there for young and old.

Finally, let’s hear a little about yourselves… what’s your comics background?

RE: I came up from the Small Press scene, making comics at home, stapling pages myself – the old-fashioned way! Four years of comic conventions all around the country later, our work was spotted and we were offered the chance to work for Titan on their Dreamworks title. That was our first big break. As one half of The Etherington Brothers, I’ve written three all-ages graphic novels that have been nominated for an array of awards. I’ve produced comic stories for bestselling brands like Star Wars, Transformers, Wallace and Gromit, The Dandy, The Phoenix, Kung Fu Panda and How to Train Your Dragon as well as writing for animation and film. Our How to Think when you Draw and Write tutorial series is the UK’s most successful comic Kickstarter of all time.

DF: I couldn’t stop drawing comics in primary and high school, even published some mini comics with a good mate. Eventually I had a couple of 3 panel funny strips published when I worked as a casual illustrator for some Sydney newspapers, but on the side I’d been developing a longer form sci fi adventure story for Sunday papers that was ultimately published up by Dark Horse in 2010. I’m an Illustrator by trade, but I’ve created the weekly comic strip Kookabarry, wrote and drew Harry the Dog – Newshound for many years, published Uncle Silas: GENETIS in 2010, and I’m now working on Uncle Silas: EARTH as well as my fantasy adventure story Fia & Miguel.

The Cor!! & Buster Special is on sale now from all good newsagents and comic shops, and from the Treasury of British Comics webshop!

Bite half off the FLESH collection!