Meet the team behind the revival of Ken Reid's misunderstood monster in the Cor!! & Buster Special! 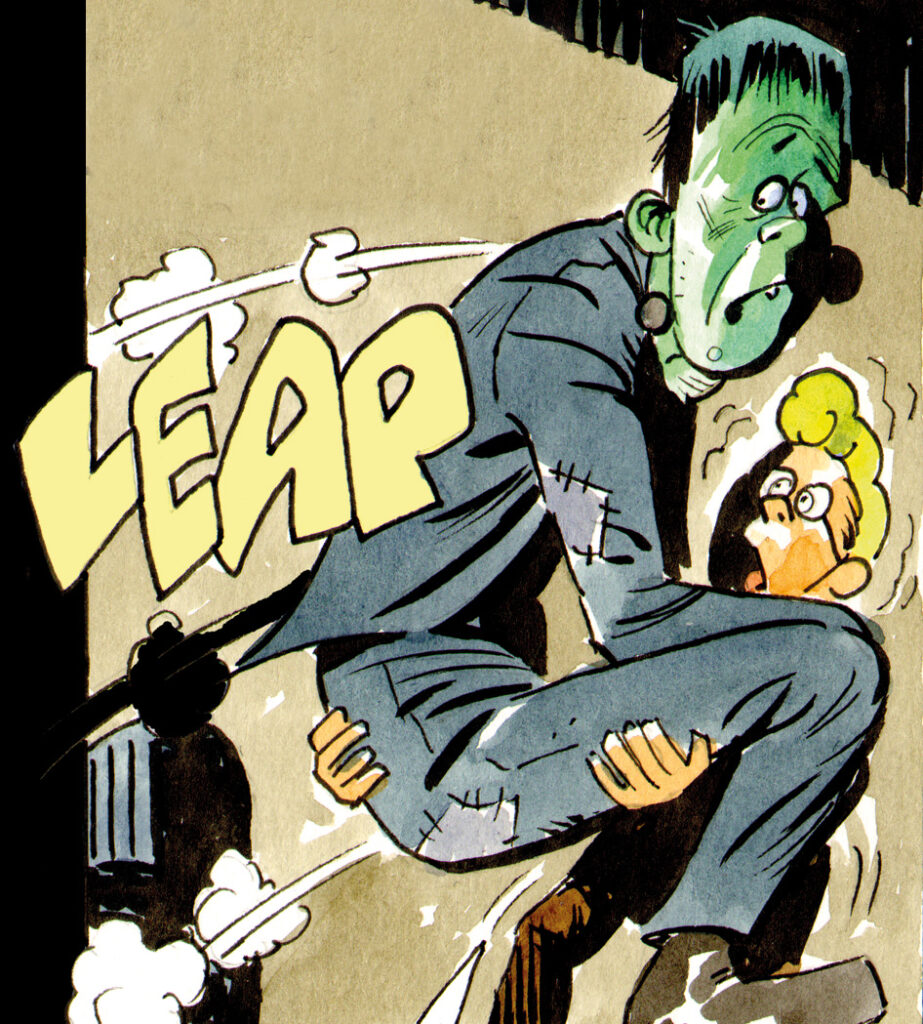 Prepare to guffaw and giggle your way through the all-new Cor!! & Buster Humour Special from the Treasury of British Comics – out now!

Taking the greatest comedy characters British comics has to offer, the new special bring old favourites into the 21st Century and is guaranteed to raise a smile!

One strip that just had to be in the Special is Ken Reid’s Frankie Stein, the bumbling, smiling misunderstood monster that first appeared in Wham! and would later appear, drawn by the equally brilliant Robert Nixon, in Shiver & Shake, Whoopee!, and Monster Fun.

In the Cor!! & Buster Special, everyone’s favourite monster comes to you from Cavan Scott and Mike Hoffman…

What does it mean to be bringing back Frankie Stein for a new generation of readers?
Cavan Scott: It was fantastic – I had literally been reading the original Ken Reid strips in a collection a few weeks before the call came. Keith (Richardson – editor of Cor!! & Buster) asked me if I wanted to write it and I came back with an enthusiastic ‘yes!’

Mike Hoffman: It was definitely a challenge and adventure! I remember Frankie Stein well from my time living in the UK back around 1964-70. I basically copied each character once from Ken Reid’s art, then allowed my own drawing approach to come into play as I laid out the pages.

Characters like Frankie, along with the rest of the classics in the Cor!! & Buster Special are all much-loved, well remembered strips, done by some genuine comic legends. Did you have any sense of that weight of history pressing down as you tackled Frankie?

Cavan Scott: There’s always trepidation when taking on a beloved character written by giants in the field. I’ve felt it whether I’m writing Judge Dredd, Princess Leia, Doctor Who or Minnie the Minx. But that trepidation is good. It makes you want to do your best work!
How did you balance bringing your own twist or something new to the strips and yet still being true to the spirit of the originals?

MH: I found there was quite a bit of latitude creatively in terms of artistic freedom, as long as I stayed relatively cartoony, like for example building the faces on circles first, the characters would be recognizable. I think even if a live-action movie were made of Frankie Stein, with actors in the roles, it would still be recognizable to fans of the original strip. That’s kind of a testament to Ken Reid’s fingerprint. I had to find that balance between the cartoony-ness of the original and whatever naturalism I wanted to bring to it.

What memories of Frankie Stein do you have from your childhoods?

CS: I didn’t read the Ken Reid originals first time around, but knew Frankie from Robert Nixon’s strips in first Whoopee and the holiday specials. I later discovered Mr Reid’s sublime work when I picked up some back issues of Wham! at a car boot sale. I soon started to hunt down copies of Shiver and Shake and Monster Fun. It’s fair to say that Frankie was a big part of my childhood, and probably one of the reasons that I’m such a big Frankenstein fan!

MH: Yes, I’m 60 this year and as I mentioned have lived in the UK, so I remember Frankie Stein and Beano, 2000 AD, Thunderbirds, Dr. Who, Randall and Hopkirk (Deceased) and all the standard British fare, even down to Bill and Ben the flowerpot men!

When it comes to the old comics, we’ve already seen a great deal of classic works coming from the Treasury of British Comics, but what do you think of what’s been done thus far and what have you really loved?

CS: Even though I have a lot of the original comics, I couldn’t resist the limited edition of The Thirteenth Floor. It’s fantastic to see the care that is being taken with these wonderful strips. Faceache too. I think it’s a crime that there are generations of British kids who don’t know these wonderful characters.

What are your thoughts on comics for children and how do you see things developing in the future?

CS: What I wouldn’t give for a new Buster weekly on the shelves. It’s not an easy sell by any means, with only the Beano surviving the cull of humour weeklies in the 1990s. Specials are great, but kids need to build associations week-in, week-out. The question is, will kids pick them up without plastic tat on the front? Maybe, maybe not, but that’s when comic-loving parents, teachers and librarians come in. When my kids were of the right age, the Beano was the only weekly available, so I bought it for them. I doubt they would have picked it up by themselves.
It would be great to see publishers like Rebellion working with schools and libraries to introduce the characters. Authors visit schools and libraries – why not comic artists and writers? I know many already do, but with the support of a comics publisher such as Rebellion, we could really start getting kids reading comics.
There have also been attempts to publish digital kids comics, to varying levels of success. It would be great to see a smartphone-friendly app like webtoons delivering humour comic material to a generation of kids who are already glued to their screens.
I realise this is all very easy to say, but if we want kids to read comics we need to give them comics. They won’t necessarily find them for themselves.

What’s your story? How did you get into comics and what have you worked on so far?

CS: My first ever comic published was a Power Rangers strip for Jetix magazine back in the mid-noughties. Since then I just kept badgering people until they let me write for them, most noticeably the Beano where I wrote everyone from Bananaman to the Bash Street Kids and Titan with Doctor Who. Granted, I’d already had a fledgling career writing licenced fiction, but I was like a dog with a bone. While I was always careful to be polite and try not to get on anyone’s nerves, I also wouldn’t give up.

More recently have written Star Wars Adventures, Tales From Vader’s Castle, the Real Ghostbusters and Star Trek for IDW, Doctor Who, Vikings, Tekken and more for Titan, The Incredibles 2 for Dark Horse, Pacific Rim Aftermath and Vertigo Quarterly for Vertigo. I also recently wrote the Rogue Trooper strip from the up-coming all-age edition of 2000 AD.

MH: I started freelancing for Marvel, DC, Dark Horse and many other publishers back in the early 1980s. I drew characters like Batman with Neil Gaiman scripting, nine issues of Swamp Thing, Hellraiser, Hellblazer, and probably more I’m forgetting! Around 1992 I decided to self-publish and have mainly done that since. My own characters are things like Tigress, Madame Tarantula, Minister Sinister, Squid Girl and many more. Plus I’ve created animated cartoons, many themed Music albums like my Halloween favourite “Monster University”, which is only one letter short from the Pixar film, which it predates by several years.

Who are your influences?

MH: My first major influence in Comic Art was Jack Kirby, and I still use his approach to visual storytelling, like reading left-to right, establishing clear eye-paths for the reader, and use overlapping forms to create depth, even though the other trappings and details are my own. My second biggest influence was Frank Frazetta, which sent me in the direction of learning Classical painting technique, which I use in my Fantasy Art work.

CS: Neil Gaiman is my spirit animal and I’m addicted to the works of Guillermo Del Toro. When it comes to animation and story-telling, I bow before Dave Filoni and will read any comic Greg Pak writes. When it comes to British humour comics, my longest running hero is John Geering, and if it wasn’t for a love of Bond, Holmes and Doctor Who, I doubt I’ll be writing today.

The Cor!! & Buster Special is on sale now from all good newsagents and comic shops, and from the Treasury of British Comics webshop!