Judge Dredd faces up to the return of the Robo-Judges in 'Harvey'! 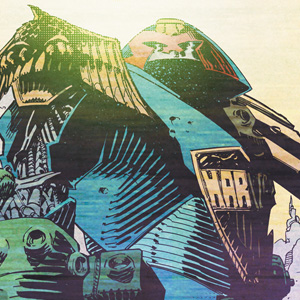 Read the first episode of a brand-new Judge Dredd thriller starting next week – the lawman encounters the latest development in the Mechanismo robot Judges programme!

Long-term readers will remember that Ol’ Stoney-Face had his reservations about giving droids executive power in the previous Mechanismo arcs from the Megazine in 1992-1993 (which you can read in the collected trade), and the Mark 2As played a significant role in the Wilderlands epic as well as helping Justice Department repel those pesky xenomorphs in Judge Dredd vs Aliens: Incubus.

Ever since then, it’s all been quiet on the robot Judge front — but now, courtesy of John Wagner and John McCrea, the Mark 8 RV unit is being unveiled, the latest attempt to bolster the ranks of the law!

Have the failings of the past been fixed? Can a droid ever be given the power of life and death over a citizen? Don’t miss a single episode, Terrans, as Dredd meets his mechanical counterpart in Harvey!