The 2000 AD blog talks to the winner of the first 2000 AD Art Stars competition, who'll be getting their work published in 2000 AD! 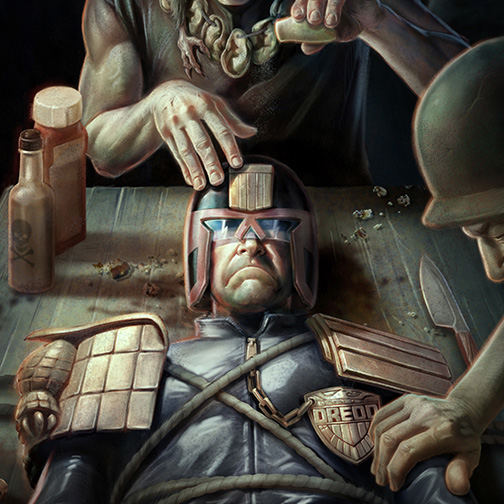 Mark Montague is the first winner of the 2000 AD Art Stars contest, the incredible competition giving you the chance to see your art gracing the pages of a future issue of 2000 AD!

Mark’s piece shows Judge Dredd captured and in the clutches of Brother Morgar and the Brotherhood of Darkness, fondly remembered by us all from the ‘Cursed Earth’ saga and will be appearing in a future Prog as a Star Scan.

The Star Scan has been a staple of 2000 AD for many years, with pin-ups over the years from many of the greatest names in 2000 AD and British comics history, including Brian Bolland, Dave Gibbons, Kev O’Neill, Jock, Liam Sharp, and many more.

The second Art Stars theme for winter 2018 is Rogue Trooper, so get your entries in as soon as you can! We’ll be featuring selected entries on 2000 AD’s social media and the very best will be featuring in the Prog!

After finding out about the Art Stars competition, with the inaugural theme of Judge Dredd, how long did it take you to decide on that final image, of Dredd in a passive pose, captured by Brother Morgar and the Brotherhood of Darkness from the Cursed Earth saga?

MARK MONTAGUE: I did several ideas but I decided against a cool pose of Dredd holding a gun or posing on his Lawmaster, because most of the great 2000 AD artists had already done iconic covers like that, so I wanted to try and paint a scene which was telling a story.

Like many readers I was a fan of Brian Bolland’s Eagle covers, which had Dredd in very stressful predicaments but he wasn’t fazed by the situation. The covers of Judge Dredd No.5 and No.32 are perfect examples of this. In the back of the Titan Books ‘Cursed Earth’ collection, Bolland had drawn some posters, which depicted scenes from the story in greater detail or sometimes a scene that didn’t actually take place at all.

I liked Morgar and the Brotherhood of Darkness but always felt that their story was a bit rushed and I always wanted to see more of them, so my picture is a scene that takes place after Bolland’s image for the No.5 US reprint. I still wanted to get a bit of humour into the picture by having Morgar adding a bit of seasoning, to make Dredd a bit more appetising to digest. Also, I had Dredd, looking more miffed than terrified.

Is this your first appearance in the pages of 2000 AD and what does it mean knowing you’ll be seeing your art as a Star Scan?

MM: To have my work published in 2000 AD is a dream come true, though this isn’t the first time for me being published in 2000 AD. From the early to mid 80s I had some of my drawings published in Tharg’s Nerve Centre. I had a ‘Rogue Trooper’, ‘Strontium Hog’, ‘Judge Schwarzenegger’ and a ‘Joe Pineapples’ picture published.

Going back to your earlier days now, when did you first get into comics and how long was it before you picked up your first Prog?

MM: It was around 1978, although it tended to be a bit off and on, mainly due to the fact the newsagent never ordered many copies. So, one week you would get an issue of Starlord but the next week, somebody else had brought the next instalment of Starlord, so you would buy Spectacular Spiderman instead, or whatever was left. My first 2000 AD was Prog 180 with the classic, ‘Judge Child’ story. Even though I had missed most of the previous parts of the story by then, I was hooked from that point on.

Looking back over the history of 2000 AD, what strips or characters are your favourites? And what artists have had the most influence on your ownwork?

Can you give us some idea of your artistic background? Did you always want to get into comics art or has the process been a more roundabout one?

MM: I’m 48yrs old and I’ve had no formal art training. I did an art foundation course and was disappointed to discover that the tutors weren’t going to teach us anything useful about drawing or painting. It meant that I had to teach myself to get better at art, which is okay but without a mentor, it means that you take a lot longer before you are ready to start working as a professional artist.

I managed to get some work as an animator, then I become a 3D modeller and all these disciplines feed into my 2D work. From 3D modelling I discovered ambient occlusion, sub-surface scattering, bounce lights, fill lights, rim lights and from animation I got the importance of good acting and strong poses that help convey an emotion to an audience.

What comics work have you done already before this Art Stars win?

MM: I did some self-published work which was sold in my local comic shop in the early ’90s. My artistic range ran from humour strips (The Cosmic Sausage) to my arty style, trying to channel my inner Bill Sienkiewicz, for a strip about a person who was unaware that they are a prisoner. I then stopped drawing comics for a while, when I became an animator.

Finally, what’s next for you?

MM: To get a chance to paint some covers for 2000 AD and the Megazine, which hopefully people will like!