INTERVIEW: bring on the baddies with the 2000 AD Villains Takeover Special!

Editor Keith Richardson explains why the villains are taking over 2000 AD this week! 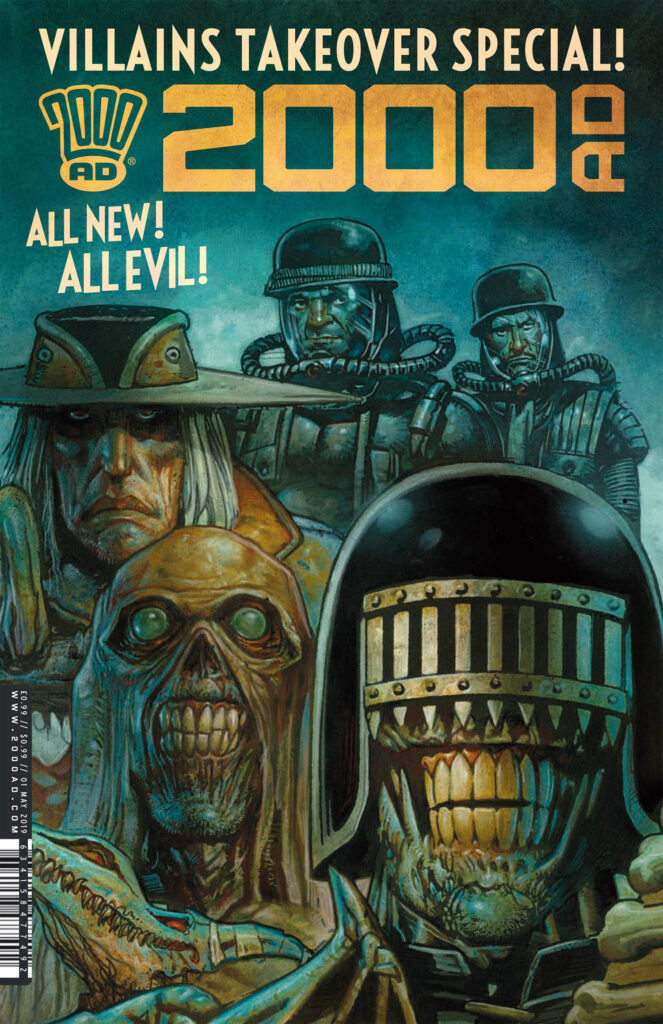 The 2000 AD Villains Takeover Special is out now!

The 32-page US format special is now on sale and inside you’ll find evildoers and terrors, miscreants and malevolence, all thanks to a team of incredible talent, and all put together and masterminded by Rebellion’s graphic novel and specials supremo, Keith Richardson.

Richard Bruton sat down with Keith to talk dastardly deeds and vile villainy… Bring on the bad guys!

Keith Richardson: Last year, for our Free Comic Book Day comic we did 2000 AD Regened, a title specifically aimed at younger readers, featuring all-ages versions of Dredd, Johnny Alpha and the rest. Now, I was expecting a bit of flak from our fans, but they were fabulously gracious about it, really got behind it.

So, this year, I wanted something that was more a thank you to the fans who’d stuck with us, supported us with the Regened last year. The Villains Special seemed a perfect fan-favourite idea.

KR: Well, all publishers are allowed to submit two titles for FCBD, Marvel and DC always get two books in, but some smaller publishers don’t. We thought we’d try our luck submitting two titles this year, because now we’ve got 2000 AD and The Treasury Of British Comics. And, although they went for the Treasury title, Funny Pages, they decided not to pick up the 2000 AD title, which was the Villains takeover.

Was there never the thought of simply using the material for the usual Prog?

KR: No, because the Free Comic Book Day people demand that all of the books qualifying for FCBD have to be produced to US format size, which meant we couldn’t use any of this specially commissioned material for the pages of the Prog.

When did you start prepping for the Villains Takeover Special?

KR: You only find out about October if you’ve qualified for FCBD and then you need to submit the finished comic by January for them to check the titles are appropriate for FCBD. That means there’s a very small window to produce the comic if you wait to see if you’ve qualified.

So, because the turnover is so quick, and because at 2000 AD we like to produce new material for FCBD, we decided to go ahead and commission strips well before we knew whether we’d qualify or not. In the back of our minds, we always had the thought that we might not qualify, as it has happened before. So we decided that it was something that we would put out separately if needs be.

I suppose the title itself tells us a lot about it, but what’s the idea behind the special? And how did you decide just which villains were going to feature?

KR: With the villains, I thought it would be great to get the classic villains plus some lesser used villians in there. It’s good to have a different angle every year and we’ve got such a rich array of villains, so it was an easy decision really. Plus, unlike some companies, who over exploit the villains that they have, so you find they lose their impact, with 2000 AD, we’ve got villains that we, kind of, dispatch quite quickly. Our fans love our villains, Brass and Bland from Rogue Trooper came up again and again. As did Judge Death. Judge Death is, by a long way, the most recognisable character from Dredd. In America, for example, they know and love Death more than Dredd. Another group of villains people love are Strontium Dog’s old villains, the Stix, so we wanted to get them into the Villains Special.

How did you decide on the creators involved? Do you get in touch with the talent with an idea of which characters you wanted involved?

KR: I always have a rough idea what I’m after for the FCBD comics and the specials, so I get in touch with creators and let them know what I want to see and nine out of ten times they surprise me by taking those initial ideas and making them better. But it was definitely villains I wanted to see again based on a load of feedback from the fans.

What do you hope readers will get out of this latest 2000 AD special?

KR: Like I said, because last year’s special, 2000 AD Regened, was so different from the normal 2000 AD, this one I really wanted to make for the fans, featuring some fan favourite villains. So many fans get in touch with us, online, at conventions, talking about characters they love and who they don’t think they’ve seen enough of. And with The Villains Takeover Special, I know we’re going to be putting something out that the fans should really love. And if we can offer them the Villains special at a low price, then we’d like to think we’re doing a good thing as well.