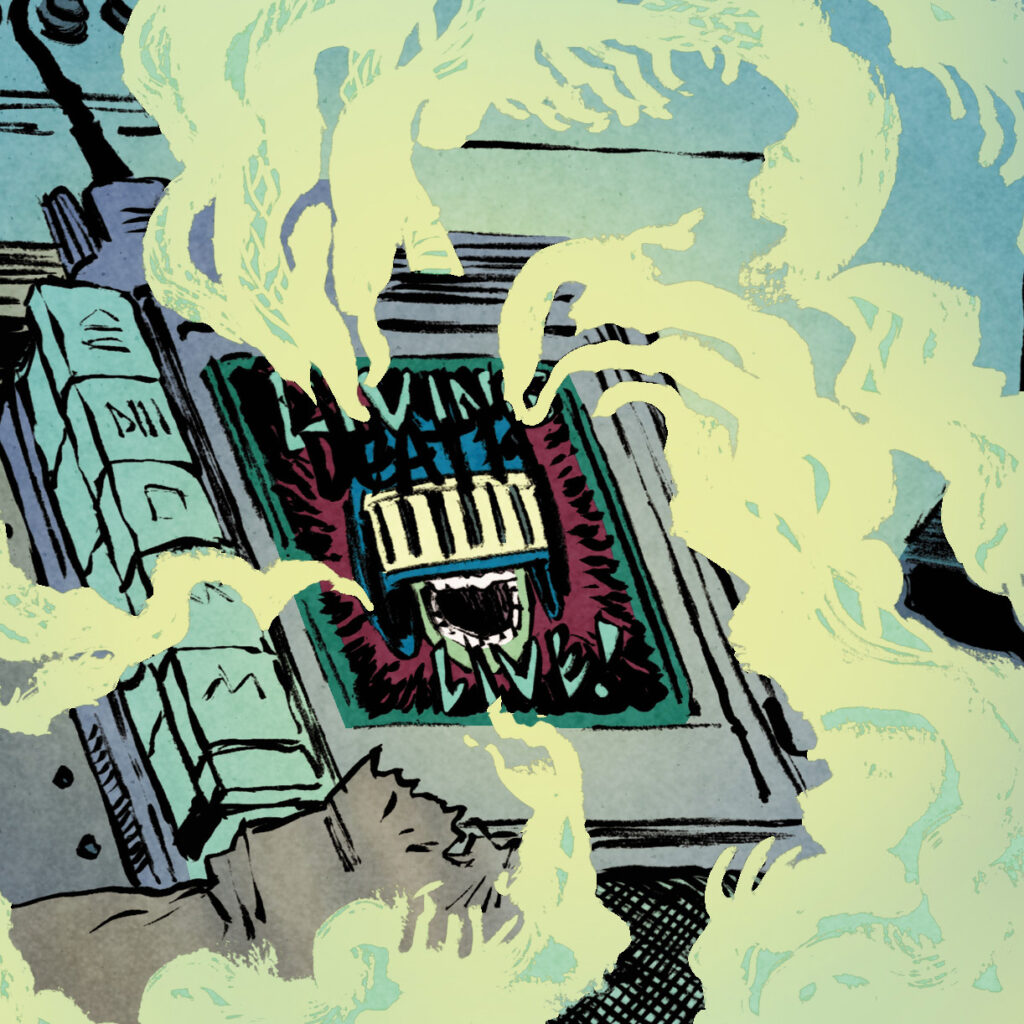 There are bad guys in the world of Dredd … and then there’s Judge Death!

Leader of the Dark Judges, causing death and destruction ever since first making their way over from the alternate dimension of Deadworld. Judge Death always returns to Mega-City One and the body count is always terrible.

Uttering the magic words, “The crime is life, the sentence is death!”, Richard Bruton chatted to Leah Moore and artist Xulia Vicente about bringing Death to this summer’s Sci-Fi Special…

Richard Bruton: We’ve seen Judge Death in many forms over the years in the pages of 2000 AD. Every time, it comes with a high body count, and occasionally a gag or two thrown in for good measure. Can you give us a quick idea of what this new story is all about?

Leah Moore: My story is basically a celebration of Judge Death as a metal head poster boy, and a homage to Judgement on Gotham. A metal band finds a bootleg of the concert from that book, and decides to cover the songs. It’s the best move of their career, but also, then, the worst. I absolutely love Judge Death. As terrifying skeletal murdering beings from other dimensions go, he’s really personable and entertaining!

Leah, you’re one of a handful of women who’ve already blazed a trail in the pages of 2000 AD. How do you feel about the all-female creative team idea of this Sci-Fi Special?

LM: I’d say it’s long overdue, but then up until recently, it was impossible to discuss gender in the comics industry at all without risk of being branded a crazy radical man-hater. I used to do ‘women in comics’ panels at every convention, where there would be five of us and not one would mention what it was like to be a woman in comics. Not the lack of female writers, or artists, nor the weird sexy costumes women characters wear, nor the fact that a superhero team of six has only one woman in it, nor that female characters exist as a love interest, or as a person to be wronged that the male lead then has to avenge. We used to sit and talk for an hour and not mention any of that, because as a industry we couldn’t talk about it. It was a great big elephant in the room, except the Elephant was wearing a Power Girl costume, complete with boob window.

For 2000 AD to have a women-only issue, for them to actively promote the fantastic women they have on their team, is completely in line with their history of using science fiction and fantasy comics to comment on the politics and social issues of the time. 2000 AD has a unique position of being able to take something like the mass unemployment and strict regime of the ’80s in Britain under Margaret Thatcher and give us great Judge Dredd stories about the police being given ultimate power, or Halo Jones where a girl from an estate gets to escape her world and go on adventures. I really hope that the Sci-Fi Special encourages more women writers and artists to pitch to 2000 AD and feel that they really have a place there, and within the comics industry.

I also hope it means we get to write more female characters, and write stories that echo the current female experience. I want that handful to become a great big armful of women creators, a skipful, let’s be optimistic! In fact, let’s go berserk and say I would like for half of all writers and artists and editorial staff and letterers and colourists in the industry to be women.

Leah, of course, your history with the comic goes back a lot further than your first writing credit for Tales from the Black Museum in 2012. What are your first memories of 2000 AD? Any particular favourites?

LM: I’m in a weird position because 2000 AD was the backdrop for my childhood, so all my dad’s characters are the most familiar to me. But, when I grew into a teenager, I didn’t really find myself drawn to comics the way most people are, as an escape from their normal lives. I loved reading them, and I loved drawing and writing, but I wasn’t driven to collect them or anything.

My favourite character is Halo Jones, because it’s my favourite out of all of dad’s books. It completely set me on a road of sci-fi fandom in all media, she’s who I want to be BFFS with, it’s my ultimate squad goals! I always feel daft saying it; because dad wrote it, but it just connected with me when I was of an age to really get into it. I can’t wait to see it coloured. Obviously the black and white art is stunning on its own, and has the spotted blacks and gorgeous balance that the very best black and white comics have, but the fangirl in me wants the coloured version too, and clothes and posters and mugs and whole shebang!

Xulia, how much 2000 AD had you seen in Spain before becoming involved with the Sci-Fi Special? Were you already aware of the long history of Judge Death?

Xulia Vicente: I’ll be honest: myself personally, none, which makes me a bit nervous to draw my take on it. But at least I knew a bit of Judge Death and the general aesthetic of Mega-City One. I think 2000 AD material appeared in ’80s Spanish comic magazines like Cimoc and such, Judge Dredd was serialized then and has been compiled in tomes for a while now. So I gotta do my research now and see how it comes out!

Your style, from what I’ve seen online, is far from what we’re used to seeing with a character as dark as Judge Death. Are you adapting your style, full of bright colours and lightweight lines to Death, or is he having to adapt to you?

XV: Yeah, what I’ve been posting lately doesn’t look like a Judge Death comic at all! But I’ve drawn a bunch of short horror stories, and you could say my first long comic published, Duerme Pueblo, fit the genre. So it’ll be more like revisiting a style I’m familiar with. And besides, Leah’s script has a quirky, dark humour tone I love, so that leaves room for the bright colours anyway!

Leah, this would be your first 2000 AD credit without John Reppion. How did you break it to him?

LM: I told him that finally I was free from the shackles of his patriarchal control, and that i would dance on his grave with my newfound sisters under a full moon, sipping the blood of our enemies!

After the Sci-Fi Special, what do we have to look forward to from you both?

LM: Actually, me and John have more Storm Warning on the way, with Tom Foster, which was loads of fun to write. Monosyllabic psychic female cops FTW!

XV: Working on short stories for anthologies like this is a very nice stop on long projects under development. I’ve done a few of these this year while trying to finish my comic with Manuel Gutiérrez, Ira, Jinete de Dragón, a fantasy tale for young readers we’re publishing in Spain.