The editor behind the revival of two of the biggest British girls' comics chats about choosing characters, finding new voices, and the future for the Tammy & Jinty Special 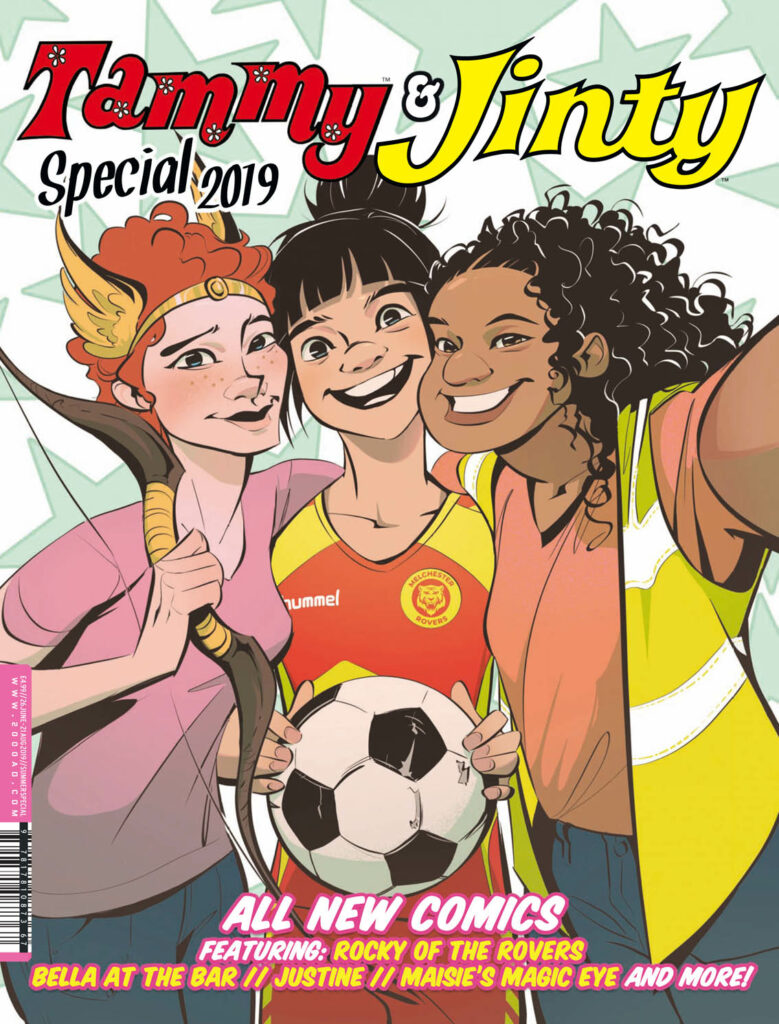 Two of Britain’s best-loved girls’ comics are BACK and they’re BETTER THAN EVER! Tammy and Jinty return with the Tammy & Jinty Special 2019!

These ground-breaking female-led comics covered everything from science fiction and fantasy to romance and domestic drama, and this brand new 48-page special, retooled for the 21st Century, features a host of the finest modern creators pay tribute to this legacy of trail-blazing comics while introducing a new audience to the medium!

Lizzie, you’re the editor of the Tammy & Jinty Special, the first new British girls’ comic in quite a while. So, I suppose, to start off with, we need to ask about your own reading and experience of the world of Brit girls’ comics?

Lizzie Boyle: I grew up reading Bunty – that was my go-to girls’ comic, most likely because it was what was available at our local newsagent!

British girls’ comics were so popular through the ’70s and into the ’80s, but after that, within a few years, they were gone. Why do you think we saw such a purple patch of great Brit girls’ comics up to the 80s and what made them vanish the way they did?

LB: Actually, the tradition of girls’ comics goes back a long way: in the ’50s, Girl was selling 500,000 copies an issue. So I don’t think we can view the ’70s and early ’80s in isolation, we have to see them as part of something bigger.

Why do we revere the ’70s and ’80s era so strongly? Perhaps that perfect storm of creative talent, coupled with changes in society’s perceptions and expectations of girls meant that we have a legacy of something really special.

What made them vanish? No doubt there were commercial reasons – perhaps there were too many titles in the market and they stopped selling. Down The Tubes suggest that Tammy was cancelled when sales fell below 100,000 – a number that would delight most comics publishers these days! Let’s not forget that Bunty was published right up until 2001, so the market didn’t entirely disappear, but it was certainly shrinking.

Maybe there was also something about that “tween” age which disappeared from view in the 80s. Girls would go from being kids reading Whizzer and Chips to young teens reading Look-In and Smash Hits and focusing on pop stars and make-up tips.

We’ve already seen some girls’ comics reprints from the archive of material now owned by Rebellion – with Bella At The Bar and the Jinty; Land of No Tears and Human Zoo collection, plus the reimaginings of various strips in the Scream! & Misty specials. But, what are the strips you think are absolutely essential to get the reprint treatment?

LB: Bella At The Bar was obviously the marquee strip from the archive and an essential for a reprint. Land of No Tears is fascinating because it anticipates so many themes about environmental collapse that are very relevant today, as does Fran of the Floods. I think the stories that deserve a reprint aren’t necessarily those that feature a specific character, but those that tell us something about who we are now. What are the things that matter to us and how can this story shine a light on them?

If you forced me to choose: Tomorrow Town by Benita Brown and Jose Casanovas anticipates the Internet of Things and contains some lovely 2000 AD-related Easter Eggs, whilst Dance Into Darkness, drawn by Christine Ellingham, is super-stylish, spooky and full of rather fab disco dancing… as with so many of the strips in the archive, finding creator names can be a huge difficulty, so I’m not sure who wrote Dance Into Darkness – it’s in the Jinty archive for Jul – Dec 1978.

Now, onto the Tammy & Jinty Special – how did you first get involved?

LB: I was lucky enough to write stories for the Scream! & Misty Special (2018) and the Cor!! Buster Special (2019) so was already working with the team at Rebellion. I’d previously edited a number of anthologies under the Disconnected Press label, so had some of the cat-herding skills that a project like this requires. Ben Smith and Keith Richardson at Rebellion saw a glimmer of something in those experiences and very kindly invited me to be the commissioning editor for the Tammy & Jinty Special.

Part of the project would have, no doubt, involved getting to see the material at the Rebellion comics’ archive. What was that like?

LB: Have you ever seen a quokka? They’re known as the happiest animals in the world because they always seem to have a huge grin on their faces. That was me, standing in front of the archive at Rebellion and being told to dive in. Wow! So many great stories, so much great art, all bound in these great red hard-backed volumes… As a comics’ reader, you get such a thrill from having access to that history. As an editor of a special, you suddenly feel the legacy looming over you…

Yes, that legacy. How does that weight of responsibility feel?!!!

LB: Oh, yes… it’s a huge responsibility! We had the twin goals of creating awesome new stories whilst staying true to the themes and vibe of the old comics. We spent a lot of time trying to understand what went into a Tammy or Jinty story – the themes and ideas and concerns that sit behind the words and art on the page. You look at genres and pacing and humour: the whole range of things to try and pull out what makes something feel like it belongs in the world of Tammy & Jinty. And then you trust your writers and artists to understand the feeling of what you’re trying to achieve and you let them get on with it!

Yes, when looking at the creators involved and the strips in the special, it’s noticeable for a few things… You’ve assembled a real mix of names… some familiar from 2000 AD, but many of them from outside, from the worlds of self-publishing & there’s a wonderfully modern feel to the strips, taking those key elements from the girls’ comics, whether that is sports, achievements, adventures, but all updated.

But the world is also very different today: there are more opportunities for and expectations of girls. In the very early girls’ comics, the lead character was pretty much going to be a wife, mother or domestic servant. Over time, as society changed, the messaging in the comics changed: you can do this, you can fight for this, you don’t have to conform. That’s something that often gets lost: just as 2000 AD had that punk ethos, so did a great many girls’ comics in the late ’70s. So we wanted to capture the spirit of possibility without the constraints that society placed on girls in the ’70s. And from a practical point of view, most of the stories in the original comics were serialised, which doesn’t lend itself to inclusion in an anthology!

Looking at the three reimagined strips… was there any difficulty deciding on what you were going to include?

LB: We needed to find stories which could stand alone, and which captured some of the essence of the original. Maisie’s Magic Eye is a very typical Tammy & Jinty concept – how you deal with something supernatural which gives you new-found power or responsibility – and I love how Kate Ashwin and Kel McDonald have infused it with so much humour and energy. Justine, The Wing’d Messenger of Justice nods to the superhero genre – which feels more resonant today – but again places the discovery of new powers into the everyday world of becoming a teenager. If anything, Bella At The Bar was the hardest. It’s so well-known and well-loved that it felt like the biggest risk to do something new with it.

Yes, Bella is the most well known, perhaps most fondly remembered of the girls’ comics. So, I’d imagine getting the right team on the writing and art was a real challenge?

LB: Finding the right artist for Bella was an interesting challenge. Should we try and replicate the iconic style of John Armstrong? Could we even find someone to do that? Or should we let a new artist bring their own style and spirit to the character? We went for the spirit of the new and I’m really excited by the artwork that Vanessa Cardinali has brought to Bella. For the writer: again, we wanted to someone who could bring the verve and life that was in Jenny McDade’s stories. Writer Rachael Ball has a long history of creating wonderful comics and graphic novels and again has brought a real spirit to the character.

When it comes to choosing the creative teams of the strips, what sort of things were you looking for?

LB: We wanted to bring together creators who could get under the skin of the original comics, understand the themes and the essence of them, but also bring something a little different. One of the joys of editing an anthology is that you can mix genres and styles so that the reader can try a little bit of everything. We aimed for a real mix of artistic styles within the Special to create something more interesting for the reader and to demonstrate the diversity of what comics can offer.

One big inclusion, alongside Bella, is the Rocky of the Rovers strip by Rob Williams and Lisa Henke. Obviously, Rob has already produced two ROTR graphic novels with Ben Willsher and Lisa produced the art for both the strip in Match of the Day magazine and the Tom Palmer ROTR novels. Getting sporting strips in is no surprise, and getting more active sports than were in the original girls’ comics is no surprise, but it was a huge surprise to see Rocky in her own strip.

LB: The original Tammy & Jinty comics often had sports stories, usually based around swimming, show jumping and, of course, gymnastics. We wanted to reflect that the nature of girls’ participation in sports has changed, but that the themes of competition, teamwork and finding your place were all still very relevant.

But, with the popularity of the new Roy of the Rovers, plus the Womens’ World Cup kicking off in June, it was just too great an opportunity to explore the life of Roy’s sister, who harbours her own footballing dreams!

What would you consider success for this Tammy & Jinty Special?

LB: Three markers of success for me: firstly, if someone who read the original Tammy or Jinty says “that reminds me of the comics I used to read” and secondly, if someone completely new says “that’s a great comic”. If we’ve got the balance right between the nostalgic and the new, then I’ll be happy.

The third marker of success is if people reading the special find out about a writer or artist that they didn’t know and go on to explore more of their work. There are so many great creators involved with this project and I hope this opens up their work to new audiences.

Finally, what are your thoughts towards future plans for Tammy & Jinty or for girls comics moving forwards?

LB: My future plan for Tammy & Jinty is to head to my local newsagent on a Wednesday towards the end of June and buy a copy! Naturally, I’d encourage you all to do the same! This is a great time to be a girl reading, writing and drawing comics and a lot of the traditional distinction between boys’ comics and girls’ comics has (rightly) disappeared. We should be encouraging all readers to engage with different types of comics – different genres, styles, traditions – to explore the stories that mean something to them.

The Tammy & Jinty Special is out in comic shops and the newsstands on 27 June.