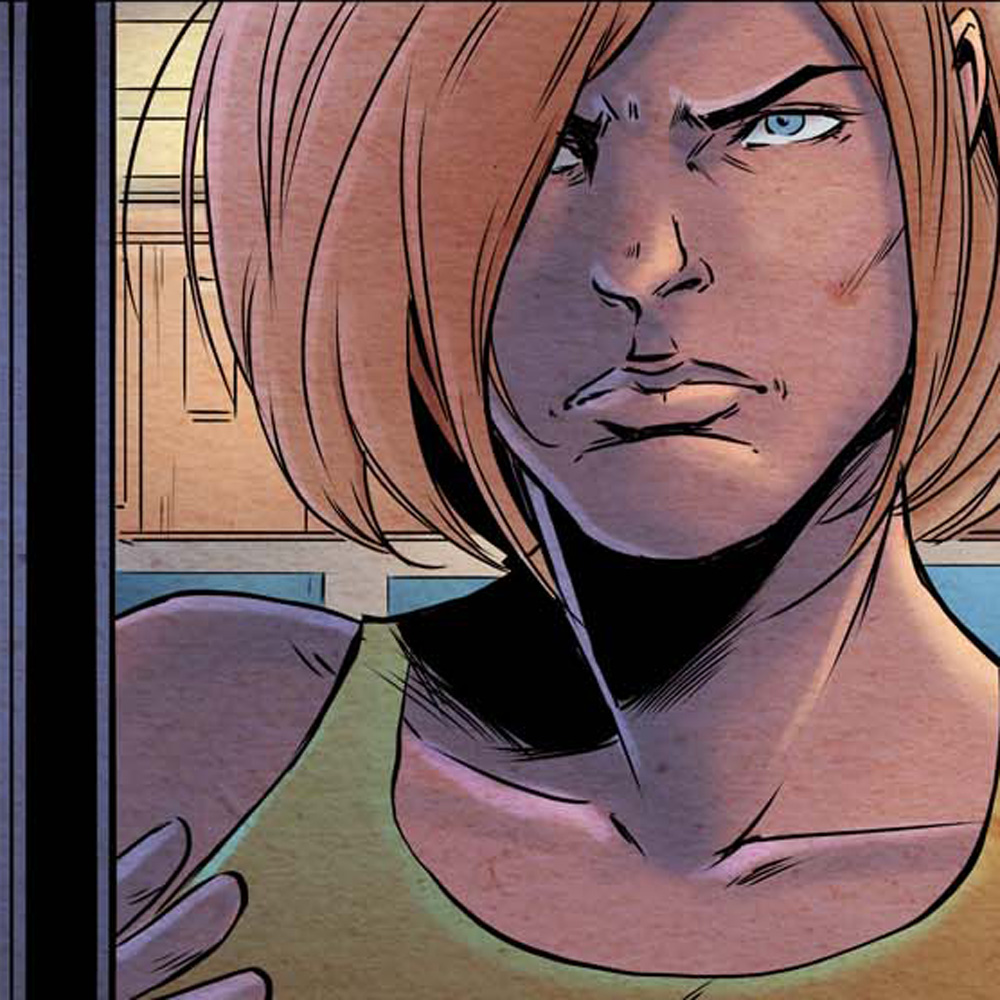 Next month, 2000 AD‘s Sci-Fi Special blazes onto shelves with an incredible line-up of talent

Within its pages will be the return of Cassandra Anderson, courtesy of writer Maura McHugh (Witchfinder, Jennifer Wilde) and artist Emma Vieceli (Breaks, Young Avengers).

In the new 2000 AD Sci-Fi Special, you have the pleasure of bringing us a tale of the greatest of the Justice Department’s Psi-Judges, the incredible Cassandra Anderson. Can you give the readers a quick idea of what the tale is all about?

Maura McHugh: The story is called ‘SPA Day’ and is about a treatment that Anderson is ordered to undertake by PSI Div… which doesn’t go as expected!

We’re used to seeing Anderson in the pages of 2000 AD, and over the past few years, the presence of some very strong female characters, good and bad, in the Justice Department has been most welcome. But what is it about Anderson that makes her such a perennial favourite?

MM: Anderson is a fascinating mix of someone with excellent physical ability, a deep sense of justice, but also a high degree of compassion. The latter part is often hammered out, ignored, or stunted in Street Judges, but most of the PSIs have to be both Judges and sensitive. One of Anderson’s coping mechanisms is her wry sense of humour, which provides moments of levity during some rather grim business. She’s been all around the universe, but her drive to help people keeps her in Mega-City One despite the terrible things she has witnessed. She has doubts, and has suffered awful losses, yet she strives to do the right thing in every situation. She’s a very relatable, complex character, and Alan Grant has written so many memorable stories for her.

Maura, you’re a celebrated writer of prose, comics, plays, and screenplays. Why has it taken so long for your name to appear in the pages of 2000 AD?

MM: Writing for 2000 AD has been on my ‘to do’ list for a long time. I had pitched a story to Matt before, and it was turned down – c’est la guerre, it happens to everyone. For this special Matt contacted me, I pitched him three ideas, and we settled on the one that – thankfully – we both liked the best.

Similarly, Emma, you’ve been working in Brit comics for many years now. Your previous work includes Manga Shakespeare titles for SelfMadeHero, Dragon Heir through Sweatdrop Studios, the adaptation of the Vampire Academy book series, and your self-published Breaks comic amongst many more. What does getting into the 2000 AD Sci-Fi Special mean to you?

Emma Vieceli: I’m so chuffed to be doing this and it’s great working with Maura. I’ve long wanted to dive into the world of 2000 AD so am happy that an opportunity like this came up. Getting to start with two kick-ass women like Maura McHugh and Cassandra Anderson is a pretty great way to dip my toe into the murky waters of Mega-City One.

What does the all-women creators 2000 AD Sci-Fi Special mean to you?

MM: Doing a special edition with women contributors is a smart way to introduce a new cadre of talented creators to the 2000 AD universe. Hopefully we’ll see more women writing/drawing/colouring regular features for the comic… because they produce strong and entertaining work. Plus, the special might encourage a new audience to pick up the comic, and stay with it. After all, there are many fantastic characters and storylines in 2000 AD. I’ve been impressed with the quality of the work that is being produced on such a regular basis (with a special shout-out to Dan Abnett and Phil Winslade on Lawless). I must tip my hat to the astonishing Annie Parkhouse and Ellie de Ville who have been consistently brilliant in 2000 AD, doing one of the most underrated jobs in comics: lettering. As a writer I’m always indebted to letterers who seamlessly keep the text visible but not too prominent, and enhance it where necessary. At its best it’s an invisible job, which contributes to why letterers are so overlooked. Annie and Ellie are great at their job, and that’s why they are employed to do it.

What were your first experiences of 2000 AD? Any particular favourite characters that you’d love to work on in the future?

MM: I read 2000 AD as a kid because it was one of the few comics I could get readily in a small town in Ireland. I was a geeky girl at a time when that wasn’t cool at all, and 2000 AD was one of my regular joys. It probably did a lot to cement my love of comics. I adored Judge Anderson. Having the opportunity to write even a short story for her has truly been a bucket list job.

As unlikely as these are to happen, the two that spring to mind immediately are Halo Jones and Sláine. Halo is such an intriguing, unusual character who doesn’t have a superpower but just wants ‘out’ – and gets to see the universe. Sláine is Irish, and I love writing mythological stories.

Of course I’d be ecstatic to write more Anderson! And who wouldn’t want to write the Dark Judges? Finally… I always loved the proto-cyberpunk ideas behind M.A.C.H.1. I’d have a blast re-working that series.

What do we have to look forward to from you?

MM: As is usual with me I’m working across a variety of media: I’m writing dialogue for the indie Jennifer Wilde game, which is based on the comic that I wrote. I’ve a couple of short film projects knocking around in various stages of development. I’m constantly writing prose short stories, and I’m working on a collection of them. And there are more comics in the offing too. Plus, a novel. This year should see the release of the stop-motion animated short film that’s based on my short story Bone Mother. Stop-motion is a time-consuming process, so it’s been a lengthy project. I can’t wait to see it.

The 2000 AD Sci-Fi Special is out on 20th June from all good newsagents and comic book stores, as well as digitally from 2000 AD‘s webshop and apps…