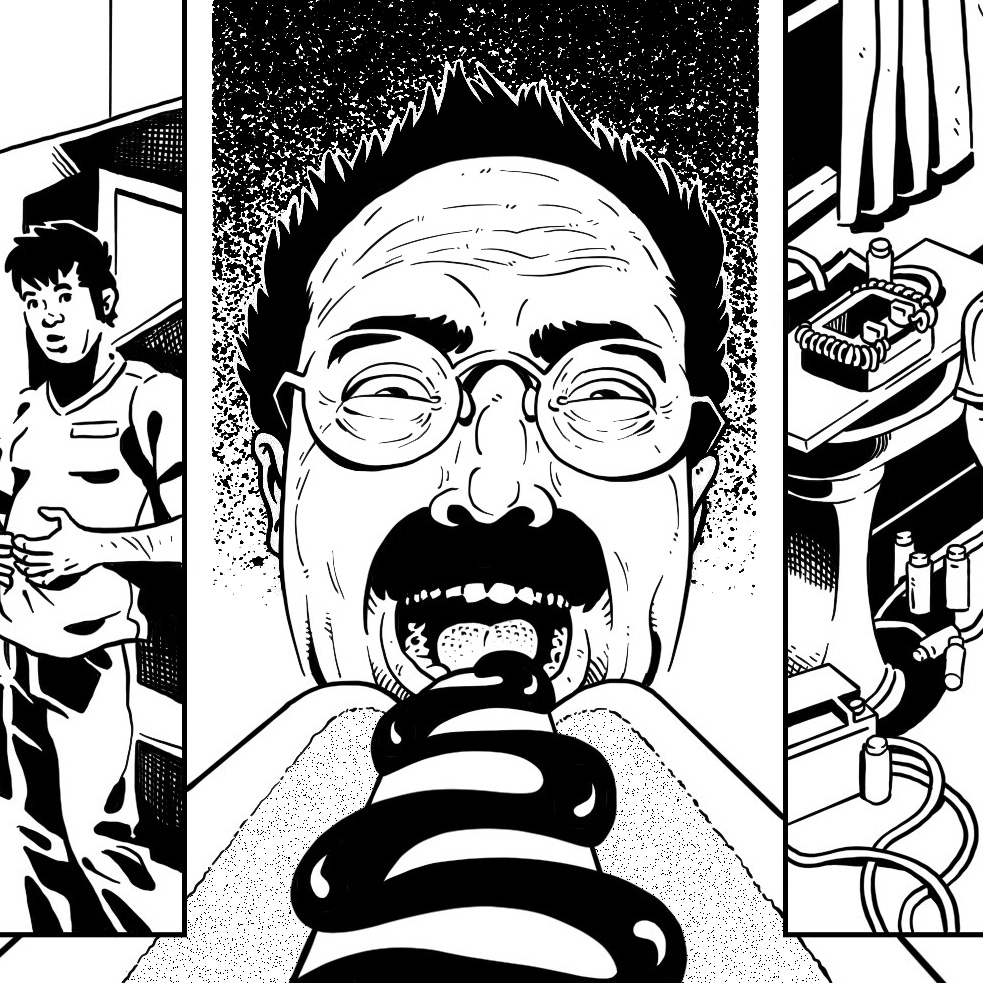 Laura and Paul won the annual art and script talent competitions at the Thought Bubble convention in Leeds, with Laura’s pitch sparking one of the loudest reactions from the audience the script competition has ever had!

Richard Bruton sat down with the new creators to find out how they got here and what it means to be working for the Mighty Tharg….

You’re both in the wonderful position of having your first 2000 AD work appearing in Prog 2072. what can you tell us what your Future Shock and just how you’re feeling about getting into the pages of the Prog?

Laura Bailey: The Future Shock is about a scientist working to create a new Bio-Diesel. Unfortunately her peers get her thrown out of university, so she has to find a way to complete the research by herself. I don’t want to say too much in case I spoil it!

I haven’t told many people about getting my Future Shock published yet because I’ve been a little cautious… not wanting to count my chickens before they hatch! The closer it gets to March 14th the more excited I am and the more I’m starting to believe that a story I’ve written will be in an actual Prog.

Paul Williams: I first decided I wanted to be an artist after Arthur Ranson’s work on Mazeworld in 2000 AD blew me away in the mid-nineties, but that I’d actually appear in its pages myself was always beyond my wildest dreams! It’s a huge honour and means a great deal to me, as a long-time reader. But what excites (and terrifies!) me the most is attempting to give a good account of myself alongside some of the best comic artists around.

Your Future Shock came about after winning the 2017 2000 AD Thought Bubble talent competitions for writing and art. For those who don’t know, can you tell us a little about the process of pitching, and the competition itself? And just how terrifying was it to get up in front of the expert panel?

LB: Writers have a chance to pitch a Future Shock, you can only pitch one story and you have to tell the story in under two minutes in front of the audience and judging panel. I couldn’t allow myself to get too nervous as I was pitching without notes. I practised a lot before hand with my friend Soph, she tested me to make sure I could pitch in under two minutes, then it was important to make sure I wouldn’t crack under pressure. She devised a method to make sure I could do the pitch under any conditions, had to pitch drunk while she heckled me and simultaneously played the Countdown music. The rationale being that if I could pitch under those conditions, I’d be able to do it sober and uninterrupted.

PW: The thing I love about the portfolio competition is that it’s a level playing field and contains extremely helpful experiences for an aspiring comic artist. Everyone is given the same script and gets experience of working to a deadline and, even if you don’t get through to the final, you’ll get some initial feedback on the work you submit. If you DO get through to the final then you get more elaborate feedback from a panel of experienced artists, which I imagine would be insightful even as just an audience member.

I’d love to say that I went in there with nerves of steel but the truth is I’d actually chickened out of entering the previous two years, despite completing entries! I’m a massive introvert and the idea of having my work critiqued in front of an audience was, frankly, terrifying. But I decided to go along to the writing pitch first, realised that they have it far worse than we do and was able to come at it with a little more self-confidence.

Like many artists, I’ve a small pile of rejection letters from Tharg. But, in truth, those were half-hearted submissions because I’d always been a bit intimidated by comic work. My background is in educational illustration, in which the client has very specific ideas of what they want your art to look like, but the best comic pages contain a great deal of the artist’s own ideas and concepts and so that feels a lot more vulnerable. Eventually I dedicated a large chunk of time towards improving my technique and storytelling skills in hope of breaking into 2000 AD, which I was fortunate enough to do at Thought Bubble.

What are your first comic reading experiences?

PW: I was a big fan of The Red Dwarf Smegazine, back in the nineties. That was after I graduated from stuff like The Beano towards more “grownup” titles, including 2000 AD. I think I even read a comic based on ITV’s Gladiators gameshow but that’s probably best forgotten!

LB: First comics I read were my Dad’s Viz annuals. My favourite characters were, and still are, the Fat Slags. As a child I didn’t really understand what I was reading but I liked the drawings. These days the reason I like them is because although the characters are extreme, they’re also completely accurate. San and Tray remind me of my mates Soph and Chels.

And when did you first encounter 2000 AD?

LB: Probably a Judge Dredd pinball machine in a pub! Comics wise, it was as a teenager when someone recommended that I should read Judge Dredd. The first thing I purchased was the Henry Flint collection but I remember having to double check with the comic book guy whether Henry Flint was a character, he was not impressed!

PW: A friend brought it into primary school one day. I remember seeing a very menacing Armoured Gideon close-up glaring out from the cover, surrounded by bolts of lightning and thinking “WHAT is THAT?!” before searching out the comic myself and receiving irreversible exposure to Thrill-power.

What artists and writers or particular works have influenced your approach to comics?

PW: I think most of my influences fall more into page design than an approach to inking or characterisation etc. I tend to read the art more than the comics themselves, these days and panel layouts are the first thing I look at. As such, Simon Davis has always been a big influence and some of his compositions over the years are just incredible. I do occasionally over-do it, though, in which case I’ll think “how would Arthur Ranson draw this panel?” as his storytelling is impeccable.

LB: Preacher is my biggest influence; disgusting and really funny. First time I’ve read something that’s made me laugh out loud and cringe audibly, I’d be chuffed if I could get that kind of reaction from something I’ve written. The Ballard of Halo Jones is also a big influence for the same reason I love the Fat Slags.

What comics (or other writing/art) work have you done so far?

LB: For my degree, I wrote a comic called Sister Sabia, about an art student desperate to be famous by any means possible, inspired in part by some of the people at art school. Some of my paintings have been in group exhibitions but I found it quite unsatisfying- not really my kind of thing, comics are a much more natural way for me to express myself.

PW: I’ve done a fair amount of work for FutureQuake and their various titles. Most of my educational illustration has been for the likes of Macmillan, Oxford University Press and Cambridge University Press.

Finally, what’s coming up for you in the near, or not so near future?

PW: I’ll be doing my first rounds of conventions later this year, including my first Thought Bubble as an exhibitor. Drawing in front of people and talking to strangers are two things that make me the most uncomfortable so come help me through some exposure therapy!

LB: Currently I’m working on an entry into the Myriad First Graphic Novel Competition; also I hope to write a story for Heavy Metal in the future. I’m very happy to be writing a Galen DeMarco story for the 2000 AD Summer Special but I don’t want to give too much away about it. I just feel really lucky to be part of the First all-female Issue, can’t wait to see who else is in it and what everyone has produced… I have no idea who’s drawing my story but I’m itching to find out.