Everything turns Toxic in the latest Judge Dredd series from IDW Comics - so 2000 AD to chat to Paul Jenkins and Mark Buckingham about covers, Dredd, and radioactive refuse! 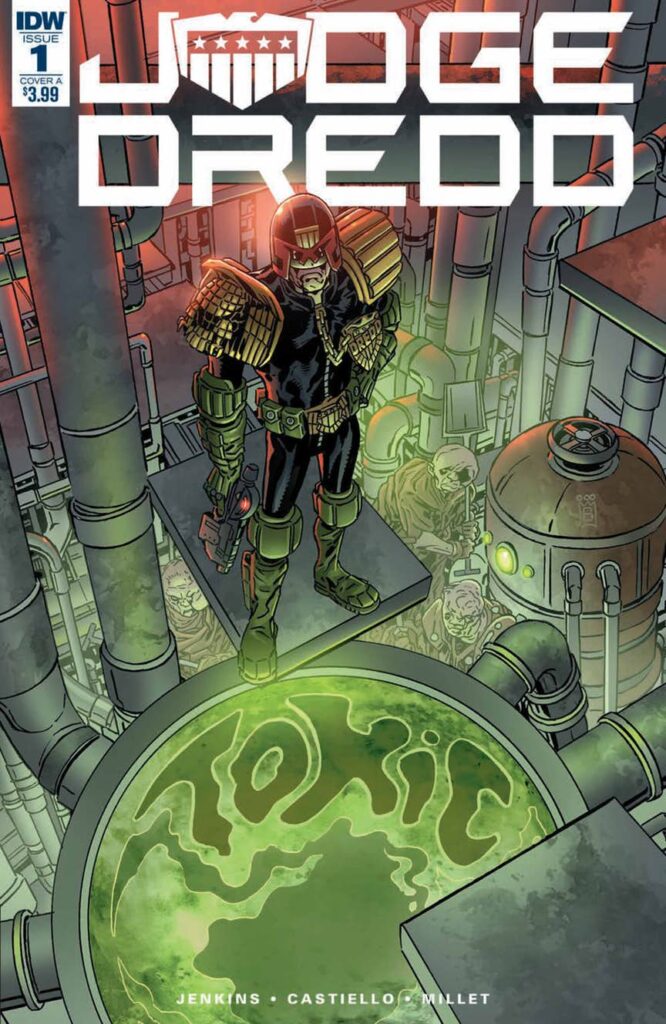 Everything turns Toxic in the latest Judge Dredd series from IDW Comics, with Dredd on the case when a gene-modded worker down in the toxic waste dumps under MC-1 turns up dead. What starts as a simple murder soon threatens to turn MC-1 upside down, with anti-immigration protests breaking out all over… toxic above and toxic below!

First of all, Paul, can you tell us a little about the series? It’s described as a tale that unfolds after Dredd investigates a gene-modified toxic waste worker and develops into something plunging MC-1 into immigration protests…

Paul Jenkins: Toxic deals with a group of disaffected workers who work in a section underneath MC-1, called the Spillover. This is basically the waste and sanitation area, and it is a thankless job – the workers are called Scrubbers, and they are real heroes of Mega-City One. Dredd and his new rookie charge – a big, burly rookie named Scammon – investigate the death of a Scrubber who doesn’t look mutated like the rest, and they discover he’s harboring an alien symbiote that actually helps the entire ecosystem, and who is beneficial to MC-1. So, this becomes a story about the benefits of immigration (hint: check your US Constitution for more on that, folks) and the chaos caused by anti-immigrant sentiment.

With Toxic, the issues of anti-mutie prejudice and immigration protests seem to be reflecting the global rise in intolerance and anti-immigration feelings for the last few years. Is this something you’d agree with?

PJ: Dredd and 2000 AD stories in general began life as a clear social commentary during the time of Thatcher’s Britain. That was a strange, unique, crazy time that saw the advent of punk rock in 1976, and a lot of anti-establishment protesting that came through in the writing and art of the day. So much of it was social allegory, and I suppose in hindsight Judge Dredd was about the themes of “necessary Fascism”.

In the preview for the series, we’ve already seen some of Marco Castiello’s artwork and it’s art that looks just perfect for 2000 AD and Dredd, capturing the city and it’s character so well in those early pages. How are you enjoying seeing your words brought to life on his pages?

And, having worked with Mark before on Peter Parker: Spider-Man, how pleasing is it to see his art on the covers of the series?

PJ: Marco’s work looks amazing. I’m lucky – I get to see it through various stages, from pencils through inks and colours, all the way to lettering. He’s done a wonderful job of taking the story, framing it and making the eye flow through the pages. I’m struck by his attention to detail – he seems like a perfect Dredd artist. Marco’s really wonderful at building the atmosphere, staying true to our concept of what makes Mega-City One.

As you know, Bucky and I spent a number of years on PPSM together, and those truly were my favorite years working in this business. I feel like we hit a creative stride, thanks in part to being freed up by our editor, Ralph Macchio. Nothing makes me happier than seeing Mark work on something that began life in my brain. One of my absolute favourite people in the entire world.

Paul, given that you’re a Brit writer, albeit one who relocated to the US a long-time ago, and given the sheer number of characters you’ve written in the time you’ve been writing comics, I suppose the question shouldn’t be what brings you to the world of Dredd but, rather, what took you so long?

PJ: I lost a bet to Tharg thirty years ago and I’ve only just finished paying him back! In related news, it takes a long time to clean a Quaxxannian sleeping module with your tongue.

Mark, like Paul, you’ve been in the comics biz for a long time and have worked for all the big names. But, surprisingly, given your high profile in Brit comics, your covers for Judge Dredd: Toxic are one of just a couple of jobs for 2000 AD (Tyranny Rex – 1991 & 1993 and Tharg’s Future Shocks: Accessory – 2001). Was it simple a case of not being in the right place at the right time and how good is it to be able to get to draw Dredd for the first time?

Mark Buckingham: It was all rather by accident than design. I was always a huge fan of 2000 AD and the amazing talents who worked on it, but all my work opportunities arose from connections with creators and editors working in the USA, so that is where I went first. I had the pleasure of drawing Tyranny Rex for a few issues and specials in 1992, and a Future Shock type story a few years later, and was approached to draw some Dredd at one point, but was already far to busy to take it on. I was delighted when the opportunity finally arose for me to draw Dredd this year and I could finally fit it in to my schedule.

So far, we’ve only seen one cover of Toxic, that image of Dredd staring down into the toxic sludge of the spillover and its mutated workers. As it’s your first time drawing Dredd, it would be great to know which Dredd artists work you loved over the years, or possibly whose Dredd style you utilised for the cover images?

MB: Personally, I find drawing Dredd is a lot tougher than he might at first appear. Getting the balance right between the lean muscular body and the chunky shoulder pads, boots, and keep and elbow pads is surprisingly tricky. Dredd has always had some amazing artists, but I looked to the early years for inspiration. Lovely Carlos (sadly missed) is in there, a bit of Bolland, and rather a lot of McMahon.

And as for the cover itself, can you take us quickly through an idea of the process involved from concept to finished cover?

MB: After immersing myself in the plot and story outlines from Paul, I roughed out a set of cover ideas, in pencil, for each issue and waited to see which ones Tharg would approve. As I was working on these covers before the interior artist had time to make much progress, I found I had to wing things a bit as to the look of the particular new environments and characters in the story, which is way they look a little different on the inside!

I’m rather old fashioned and still like working on paper, so the next stage was tightening up the pencils and then inking with a combo of a Windsor and Newton Series 7, number 3, sable brush and some Pitt Artist pens. Colour was provided digitally by Chris Blythe. I’ve had the pleasure of working with Chris pretty extensively the past year on both comic and album cover artwork, and being a veteran Dredd artist himself I knew he would be absolutely perfect on this.

After Judge Dredd: Toxic, are there any more plans for either of you to be involved with Dredd again, either with IDW or for 2000 AD?

MB: I’ve no current plans, but it would be lovely to do a little more sometime if my schedule allows. I’d certainly like to appear in the pages of 2000 AD again.

PJ: I’m writing a fun series for Aftershock right now called the Beyonders, and I, alas, do a lot of game work. I’d love to do more 2000 AD, assuming Tharg has forgiven me for that thing I did!

MB: I came to 2000 AD rather late. I started with issue 3 🙂 I was a big fan of the Dan Dare strip in those early issues, Flesh I loved too, and Dredd, of course. Other favourites over the years included Robo-Hunter, ABC Warriors, Nemesis, Halo Jones, Strontium Dog, Metalzoic, Stickleback, the list could go on for pages… but those come immediately to mind. I love all the artists from those early days too. I feel very fortunate that as well as inspiring me, some of them are friends of mine these days too. One of the glorious perks of working in this industry.

PJ: I bought the very first issue (actually three of them) and I very much enjoyed my space spinner. I also tore most of my skin off by applying biotronic stickers. I am a lifetime fan, and I’m pretty sure the existence of 2000 AD made me a writer. So, there’s that. 🙂

Judge Dredd: Toxic #1 is out now from IDW