INTERVIEW: Rob Williams & Lisa Henke on Rocky of the Rovers

Roy's younger sister is the star of the new Tammy & Jinty Special - we sat down with the creative team behind the new strip! 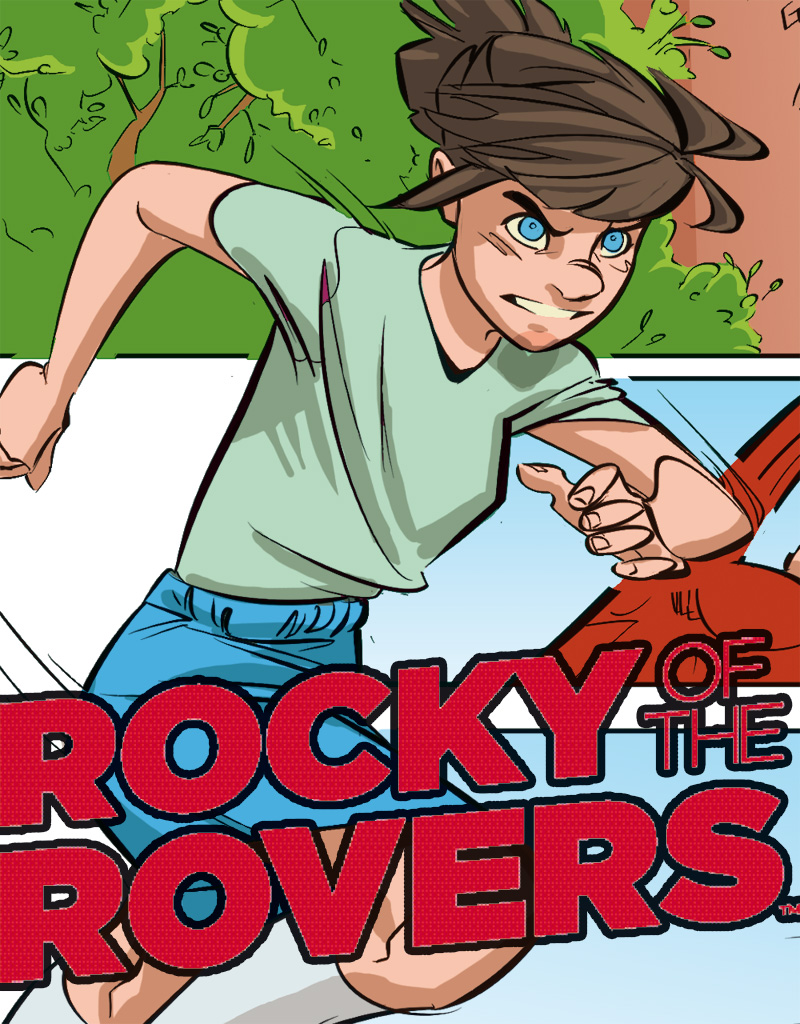 One exciting feature of the new Tammy & Jinty Special, reflecting both the tradition of including sports comics in girls comics of the 70s and 80s and updating girls comics for today is the Rocky of the Rovers strip.

Yes, you read that right… ROCKY of the Rovers!

You’ve already seen young Rocky, Roy Race’s younger sister, in the pages of the new Roy of the Rovers graphic novel series from Rob Williams and Ben Willsher, but here it’s a chance for Rocky to shine on her own!

Rob Williams and Lisa Henke tell the tale of this young footballer finding her way out of her famous brother’s shadow – only in the new Tammy & Jinty Special, which is out now!

Rob, Lisa, I was so pleased to see that you managed to get Rocky of the Rovers into the Tammy & Jinty Special. Rocky, in so far as we’ve seen her in the new ROTR, is in a different place to Roy, the big superstar brother. What stage is she at?

Rob Williams: Rocky’s a little younger, but is really at a similar stage as Roy was when we first met him with the ‘Kick-Off’ graphic novel. She plays for her local amateur team in Melchester. Rocky’s got to deal with the younger sibling thing of having a big brother who’s now a fairly successful footballer, someone who’s known in the city. And Rocky is VERY competitive. Roy’s a star striker, so she wants to prove she’s better than him. Our story in the Tammy & Jinty Special is all about Rocky starting to find out that she has to play to her own strengths, and not compete with her brother (too much).

Lisa Henke: To add to that, I think the fact of Danny, the dad, being in a wheelchair now also shapes Rocky’s behaviour a lot. Her brother Roy is having all these amazing opportunities and puts his new resources to use to aid his family and I think Rocky wants to carry the family as well and never be a burden. She wants to appear strong and like she can handle things and wants people to see her excellence, so instead of communicating her fears and sorrows she turns to anger and confrontation much more readily. This story is also about her admitting to her feelings and opening up.

And what plans do you have for her in the future? Will we see her develop and find her team, turn pro, England women? That sort of thing? And on a related note, do you have her story mapped out at this early stage or is it something you’re going to be developing slowly?

RW: We’ve had conversations about Rocky’s future. The Roy of the Rovers ‘writer’s room’ is me, Tom Palmer, who writes the Roy novels, Keith Richardson, the editor, and Rob Power, the publisher. We knew from very early days that we wanted to have the womens’ game be a part of our journey. Tom’s the writer-in-residence for the England Lions team this summer in the World Cup, I believe. We’ve talked through aspects of Rocky’s journey, some of which you’ll see coming to the fore in Roy of the Rovers season 2.

How does Rocky’s story differ from a traditional ROTR tale, and how does it differ from the new ROTR that Rob and Ben are doing? I’m thinking more in terms of the storytelling, the structure of the story… is it different writing Rocky as a football tale to writing Roy as a football tale, is there that different focus when writing a girls’ football comic to writing a boys’ football comic?

RW: Not as such. It’s still a mix of on-the-field drama and the soap opera of these characters’ lives. That doesn’t change according to men or womens’ football. The only difference in terms of structure with this short Rocky tale is that it’s a five-pager, whereas the Roy graphic novels are 50 pages. But it’s all about character journeys, lessons learnt, making you care about these people. Gender doesn’t change that.

It’s great having Lisa draw this story. She’s extremely good and there’s a real energy and vitality about her pages, along with some lovely little character-defining expressions. The strip looks terrific. But also a Rocky story probably shouldn’t be an all male creative team.

Similarly, Lisa, you’ve already drawn Roy for the Tom Palmer book series and did the first new Roy comic strip that ran in Match of the Day magazine. Is there a different approach to drawing football action for a girls’ comic strip than for one aimed at, and featuring, boys?

LH: Same as what Rob said. If anything, I choose to portray Rocky as scrappy, less elegant and more aggressive compared to Roy because the direction is that she is a much more ruthless player. Roy likes to do things by the book while Rocky is more impulsive. And then she’s a midfielder which changes where a lot of the action on the pitch takes place and what exactly the action is. But again, these are choices made to suit the characters’ personalities and not gender specific.

How did you approach the design of the Rocky of the Rovers strip? I’ve talked to several people over the last year involved with sports strips and they all talk about how difficult it is to get the action on the pitch onto the comic page in a way that makes it seem natural, realistic, yet still deliver the necessary punch for the comic page. How do you approach this problem?

LH: To me balancing realism and action is not really a problem. I pick the cool moments and then I think about how I can make them even cooler. Often I get good input from the writers as well. Also, like Rob said, this story has five pages to get its point across, so you want to choose snappy and clear panels. I try to find interesting angles that a camera can’t show you (yet) in a real match. Animation, specifically action and sports anime is something I draw a lot of inspiration from as well. Sometimes it looks and feels better if you don’t stick too closely to reality.

RW: Big plans! She’s going to be the best footballer in the family. Rocky’s determined on that. And she’s going to play for England before Roy does. That’s what she says anyway.

The Tammy & Jinty Special is out now!