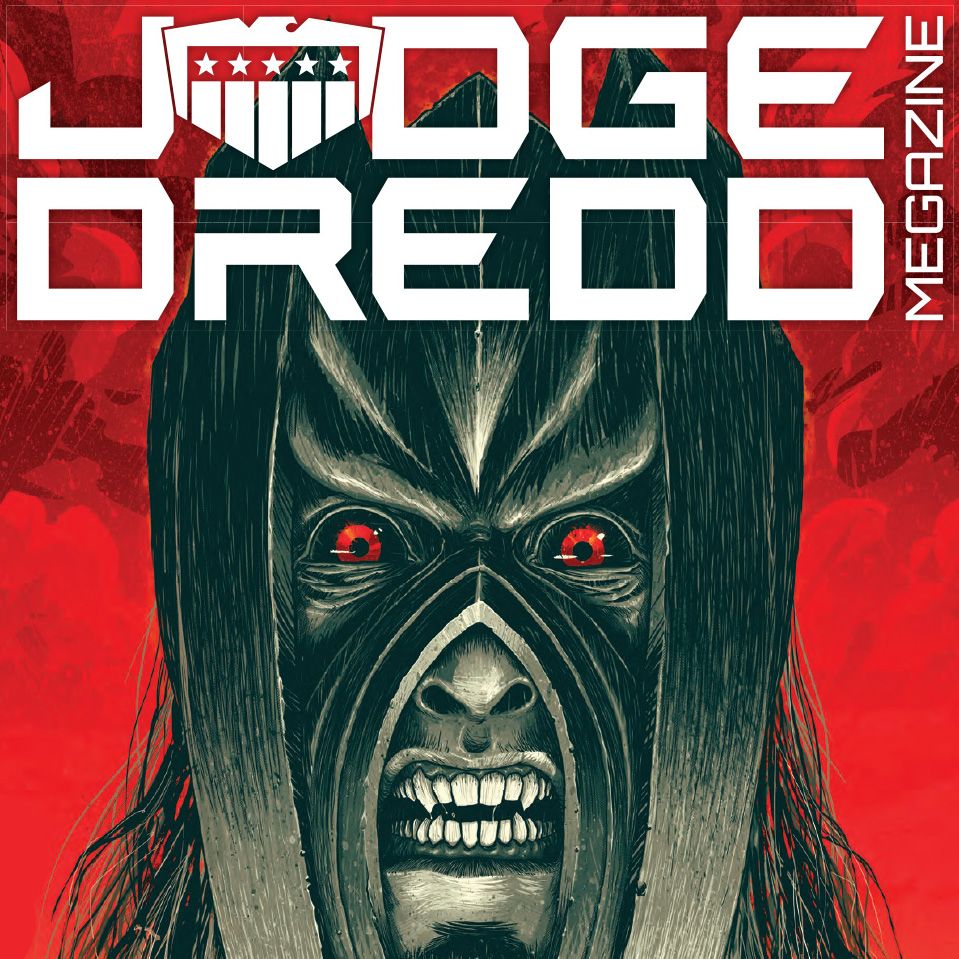 All the Thrills step up a notch as Judge Dredd Megazine #374 lands today – with a blistering hot cover by former 2000 AD design droid Pye Parr!

This month’s packed issue include Judge Dredd, Blunt, Realm of the Damned, and Lawless as well as features and a brand new text story – as well as a bagged Sinister Dexter graphic novel!

Judge Dredd Megazine #374 is available in print worldwide via Diamond Distribution and all good UK newsagents and comic book stores, as well as digitally from our webshop and apps!

Judge Dredd: From the Ashes
by Michael Carroll, Henry Flint, and Annie Parkhouse
Mega-City One, 2138 AD. This vast urban hell on the east coast of post-apocalyptic North America is home to 72 million citizens. Crime is rampant, and stemming the tide of chaos are future lawmen the Judges, empowered to dispense instant justice. Toughest of them all is Judge Dredd – he is the Law! Now, after Texas City Chief Judge Oswin’s failed coup, Justice Dept is picking up the pieces…

Realm of the Damned: Tenebris Dios
by Alec Worley, Pye Parr, and Luke Preece
Some time in the near future. The world has finally been overrun by the forces of darkness. The Vatican’s last line of paranormal defence – The Congregation – has been overwhelmed, and sole survivor Alberic Van Helsing is hunted across America by the creatures that were once his prey. But something even worse is about rise again: an ancient, terrible evil…

Blunt
by TC Eglington, Boo Cook, and Simon Bowland
The Mega-City One colony Getri-1, 2138 AD. On this remote outpost, Earth colonists have been attempting to make a new home on the planet, cataloguing and exploring its unusual flora and fauna. Dependent on supply drops from the Big Meg, life out here can be hard – so when their shuttle crash lands in the Argossa Wilds, it’s vital they retrieve it…

Lawless: Of Munce and Men
by Dan Abnett, Phil Winslade and Ellie De Ville
Colonial Marshal Metta Lawson was appointed to the frontier township of Badrock on the planet 43 Rega, intent on stamping her authority on the colony. But in doing so, Lawson made many enemies, including Munce, Inc., the mega-corporation that funds Badrock. Hired killers have ambushed the marshal, and left her for dead out in the notorious badlands…

FREE Graphic Novel: Sinister Dexter: Junk Bond
by Dan Abnett, Frazer Irving, Andy Clarke, Simon Davis, Gary Caldwell, Ellie De Ville
Former cop and now owner of the Bar None, Rocky Rhodes, is planning on marrying his girlfriend Wendy Go, but on the morning of their wedding his bride-to-be is abducted by a Mangapore cyber-job – which means Ray and Finny must head back to the one place they swore they’d never return to on pain of excruciating death…

PLUS
Fiction: No Act of Kindness by Steve Frame
Features: Joe Hill interview by Stephen Jewell; Predator vs Judge Dredd vs Aliens by Karl Stock