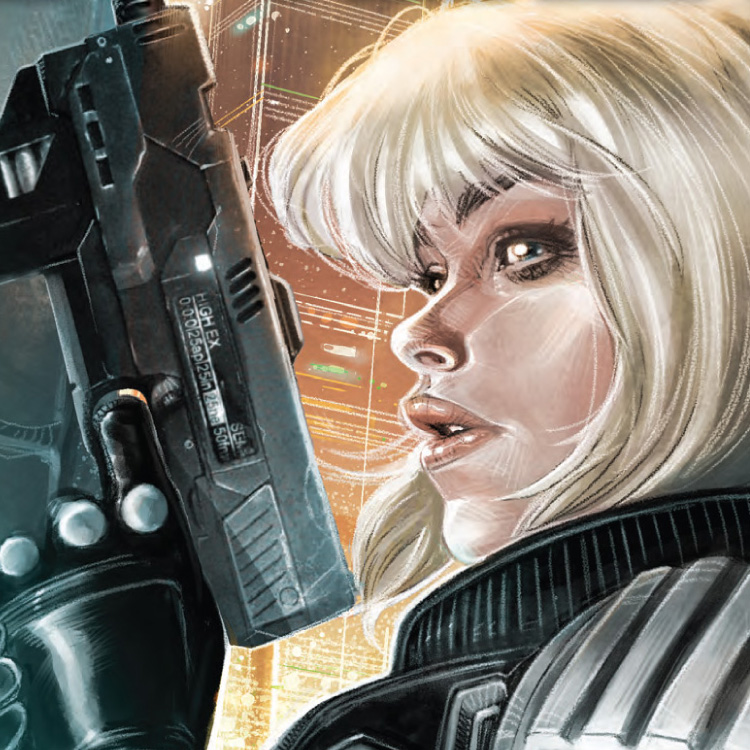 Firstly, we have the return of Angelic by Gordon Rennie and Lee Carter, continuing to take an alternate look at the early life of the notorious Texas City outlaw Pa Angel, and how he accumulated his bloodthirsty brood.

Secondly, we return to the Mega-City One of the 2012 DREDD movie but this time focus on young Cassandra Anderson for a story set shortly after the events of Peach Trees block. The Deep End by Alec Worley and Paul Davidson sees the young rookie coming to terms with life on the streets of this most dangerous metropolis.

Elsewhere, it’s the explosive finale to the Harry Heston-starring Monkey Business, there’s more monstrous action in Blunt, and alongside the next chapter of the Thrill-Power Overload update we have chats with Mega-City Zero authors Ulises Farinas and Erick Freitas as well as up-and-coming artist Tom Foster.

Judge Dredd Megazine #377 is available in print worldwide via Diamond Distribution and all good UK newsagents and comic book stores, as well as digitally from our webshop and apps!

Judge Dredd: Monkey Business
By Arthur Wyatt (w) Jake Lynch (a) Richard Elson (c) Annie Parkhouse (l)
Mega-City One, 2138 AD. This vast urban hell on the east coast of post-apocalyptic North America is home to over 72 million citizens. Crime is rampant, and stemming the tide of chaos are future lawmen the Judges, empowered to dispense instant justice. Toughest of them all is Judge Dredd – he is the Law! Now, an ape called Harry Heston has been following Dredd’s Comportment…

Blunt
By TC Eglington (w) Boo Cook (a) Simon Bowland (l)
The Mega-City One colony Getri-1, 2138 AD. On this remote outpost, Earth colonists have been attempting to make a new home on the planet, cataloguing and exploring its unusual flora and fauna. When one of their shuttles crashes in the Argossa Wilds, a search and rescue party is sent out to retrieve it, led by the half-human, half-Uplift tracker Blunt…

Angelic: Home Is The Hunter
By Gordon Rennie (w) Lee Carter (a) Simon Bowland (l)
The Texas City Radlands, 2075. He emerged out of the desolate wastelands without a name or able to remember much of his past. Injured, clearly fleeing from individuals who want to do him harm, all he could do was mouth the word ‘Angel’. Now, escaping his former life, Angel is making a home in the Cursed Earth with his adopted son Linc…

Anderson: The Deep End
By Alec Worley (w) Paul Davidson (a) Len O’Grady (c) Ellie De Ville (l)
Mega-City One, the cusp of the twenty-second century. Eight hundred million people are living in the ruin of the old world, a planet devastated by atomic war. Only one thing fighting for order in a metropolis teetering on the brink of chaos – the men and women of the Hall of Justice. Following her experiences in Peach Trees, Judge Anderson is coming to terms with life on the streets…