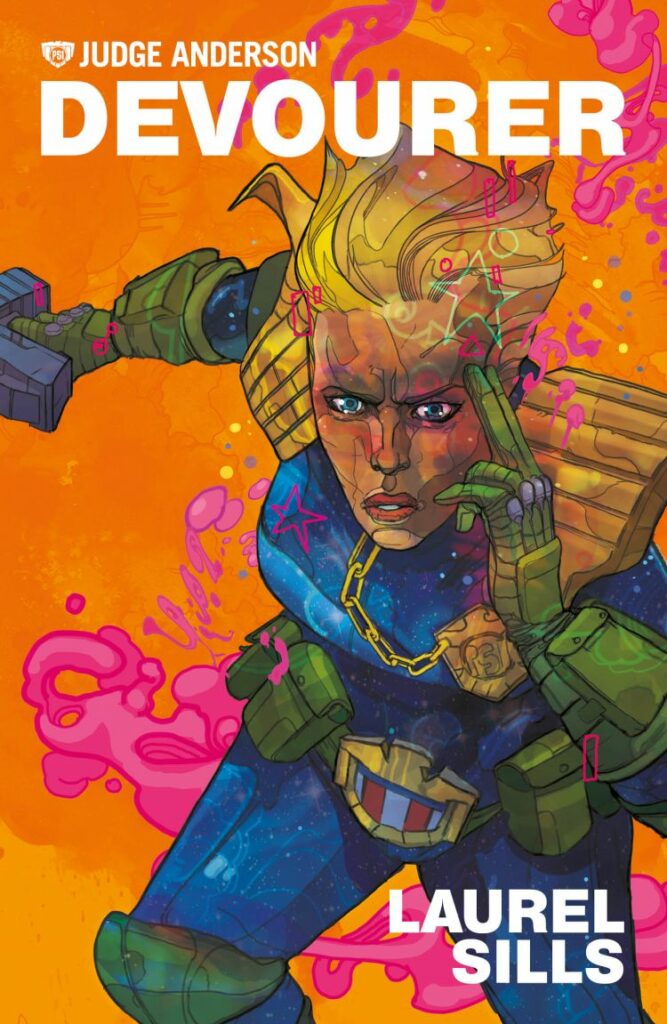 Judge Anderson: Devourer is the latest thrilling slice of novella action from Abaddon Books and 2000 AD to focus on the early life and adventures of Psi-Judge Cassandra Anderson.

Written by Laurel Sills, Devourer sees MC-1’s premier Psi-Judge before her greatest cases, just a year into her life as a full-eagle Psi-Judge. Here, something’s hunting the Psi-Judges, with the victims landing in the infirmary with the same phrase repeating across their minds… ‘I am not worthy’. Partnered with seasoned Judge Mei Yin, Anderson soon finds herself right in the heart of this madness that could take down Psi-Div and destroy her mind!

Laurel Sills is a writer and editor working out of London, whose writing includes stories in the Sharkpunk and Game Over anthologies, published by Snowbooks. From 2013-2017, she co-edited the award-winning Holdfast magazine, a celebration of speculative fiction, with eight online issues and two print anthologies. You can find the issues archived over at holdfastmagazine.com and find Laurel online at @laurelsills.

Laurel, I suppose the first thing we should do here is ask the old favourite… can you tell us a little about yourself?

Laurel Sills: I live in London with my partner, baby daughter and two cats. For my day job I am a senior commissioning editor of commercial fiction. Before my daughter was born I also spent a lot of time in bands, writing and recording music and playing shows, which is paused until I can get more than three hours of sleep in a row!

Your new Judge Anderson novella, Devourer, is out later in the month. Exactly what can we expect?

LS: A crazed psychic cult is targeting psi judges and driving them mad and the whole of Psi Div is called in to hunt the perps down. Anderson is paired with Mei Yin, a tough as nails Judge who doesn’t do partners. Devourer is essentially a buddy cop story, except the cops are psychic Judges and the crime boss is a demon god from another dimension who wants to eat the souls of everyone in Mega-City One.

What do you think it is about Anderson that makes her such a popular character? Is it her iconic status, the depth of stories that have been told about her? Or is it something to do with the contrast between her and Dredd?

LS: For me it’s her complexity. Her psychic abilities give her a connection to people that makes empathising with them unavoidable, but at the same time she sees into the darkness of the human mind. This gives her both a vulnerability and a strength that make her really interesting. She has a certain fragility that Dredd doesn’t have, but it’s not necessarily a weakness. Despite this she is really hard! She isn’t afraid to use deadly force when it’s needed and she certainly knows how to handle herself in a tough spot. She also has a rebellious side which gets her in and out of trouble that I love about her.

There’s already a rich history of Anderson from many years of appearances. What affect does this have on you when going so far back into her history?

LS: Writing such an established character comes with a great responsibility. While needing to stay true to who she is and who she will become, you also have to try not to be frozen by a fear of getting her wrong. While I certainly kept her future self in mind, for Year Two I was writing her as a young Judge at the beginning of her career. The Year One novellas by Alec Worley were of course a huge focus and where I took my lead from – my aim was to carry on the youthful and tenacious Anderson that Alec set up so brilliantly.

Seeing as you’re exploring Anderson’s past, is there a sense of constraint upon what you can do? With the “War of the Devourers” you’re creating a pretty serious part of Psi-Div history, a moment the entire Psi-Div could have been destroyed before really getting started.

LS: It is so important to respect the world you are writing in, and when I wrote the history of the Devourer War I did struggle with the weight of that. However, just by writing a Year Two novella I am creating a new part of Anderson’s and Psi Div’s history, so it didn’t feel like too much of a stretch to go back in time from Year Two to create a history for Mei Yin and the Psi Div veterans too. It’s a really daunting thing to do, but I also wanted to be able to write a rounded, fully formed story, and the Devourer War was an important part of it!

There are many intriguing little touches throughout Devourer, especially in the earlier chapters when you’re setting up the world, the environment. Moments such as when Anderson turns her nose up at the idea of bovine milk, or the food that she’s eating… Bombay-locust pie, spiced mealworm fritters. It struck me as strange at first, until I reasoned that we’re still, relatively, primitive here. So perhaps the range of food stuffs that can be synthesised or produced just isn’t there. Am I anywhere near the ideas process you had for developing your own Anderson and MC-1 history here?

LS: That is a really good point in terms of us being quite far back in time, but it was also just me taking a bit of an artistic license! I wanted the market where Anderson meets Maya to be a gritty, smelly, vibrant place that is chaotic and loud that readers can imagine themselves in. Having half recognisable food made from bugs was just a fun addition to that atmosphere. I also wanted to link to old world and lost cultures as a tip of the hat to the ancestors of all of the people in Mega-City One, but in a confused way – like the people there are trying to recreate something of the past but getting it a bit wrong, like with the Bombay locust pie. In terms of the judges having access to better synthesised food, the scene I think you are referring to is where Anderson goes to get something to eat with another Judge after something pretty awful has happened at Psi-Div. They both want to reboot somewhere far away from what is going on there – so they end up eating out in a civilian restaurant – and I imagined that the civilians could have a bit of variety in terms of quality and what is available to them compared to what the Justice System would have.

Devourer has a wonderfully striking cover by Christian Ward, what did you think when you first saw it, the very first cover just for your work?

LS: I was over the moon when I saw the cover. It’s so vibrant and represents a really strong version of Anderson that feels totally perfect.

This is your first work for 2000 AD, what does this book mean to you?

LS: I was beyond excited to write for Rebellion and 2000 AD, it’s a crazy honour and not one I saw coming. Judge Anderson actually opened up Judge Dredd for me. Although I must admit my introduction to her was via the 2012 film Dredd. That’s what made me seek her out in the comics. I really love how her character has developed over the years. It’s really cool to see the different interpretations that artists have had of her, and in a way it feels like Year Two – three novellas by three different writers – is carrying on that tradition! That’s the exciting (and scary) thing about stepping into an existing world, you get to put your own spin on it. But it’s also nerve wracking as you have so much history and a really established personality to work with, and most importantly, do justice to!

Thus far, you’re a prose writer only. But, after this first step into the world of 2000 AD, could you see yourself working up some ideas for comics, 2000 AD or elsewhere? After all, there’s always the possibilities of “The Adventures of Maya, Psi-Judge Cadet”?

LS: I have always wanted to write comics! It’s something I did as a kid a lot and I have half a dozen dodgy scripts lingering in a drawer somewhere – so yes – it’s very much something I would love to do. ‘The Adventures of Maya’ sounds pretty brilliant! Anyone want to put in a good word for me?

Judge Anderson: Devourer is out this week in ebook from Amazon, 2000AD.com, and other ebook providers, and in a limited print edition available from 2000AD.com