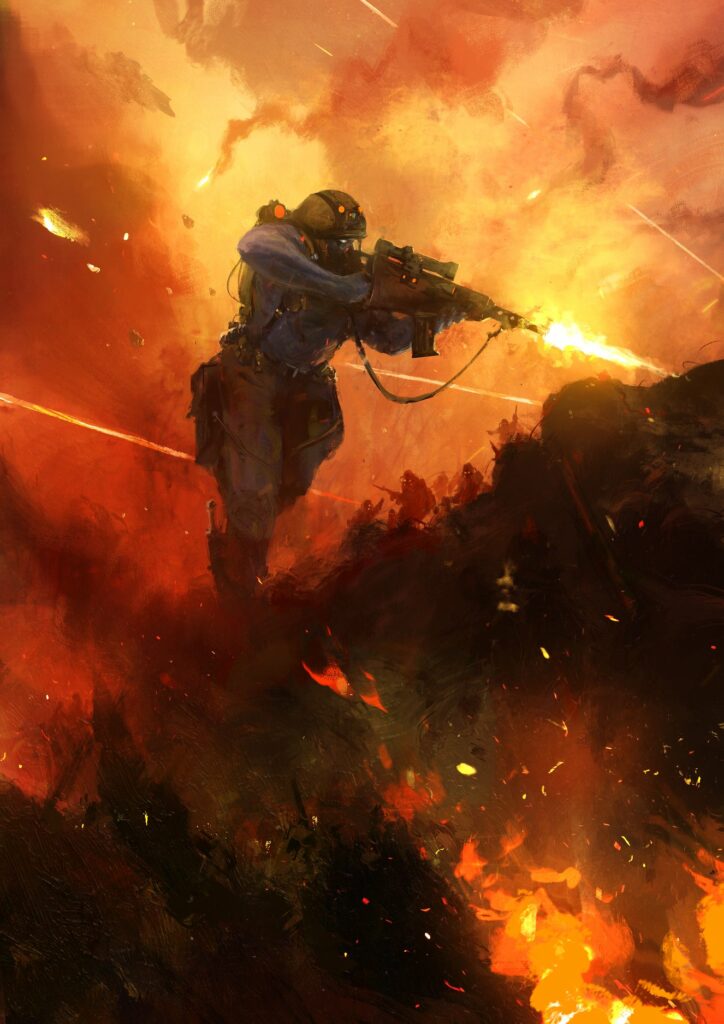 The 2000 AD Art Stars competition not only brings back the much-loved Star Scans to the pages of the Galaxy’s greatest comic but also gives some amazing artists their chance to break into comics!

You can see Ev’s Art Stars Rogue, in all its glory, printed in the pages of 2000 AD Prog 2120, and can find more of his work at instagram.com/evshipardart and evshipardentertainmentart.com.

If seeing the Art Stars winner this time has made you want to put ink on paper, the next topic, running until June, is the greatest of all bounty hunting sci-fi sagas, Strontium Dog.

Want to see your art in a Prog & get paid? Find out more over at 2000AD.com/artcomp.

Richard Bruton chatted to Ev about his winning entry …

Congratulations on your Art Stars win, first of all. What does getting your art into the pages of 2000 AD mean to you?

Ev Shipard: Thank you, I’m very excited about having my Rogue in print in 2000 AD. It’s a first for me and a real buzz to be part of an intellectual property that inspired me from an early age.

As for the Art Stars piece, in particular, what were your thoughts when coming to start the work? What were you trying to capture with the art and how did you, eventually, accomplish something you were happy with?

ES: I think key to making the Rogue Trooper painting work was to capture a moment from the firefight and immerse the viewer-  Imagine a frame from a film with the apocalyptic, poisoned landscape of Nu-Earth, with the Nort troops coming through the deadly fumes and the smoke. I’d usually go for a wider cinematic framing but to accomodate print I wanted to make sure it worked in the vertical format. Obviously, the figure of Rogue is the main focal point of the piece and his blue skin made a perfect contrast in my piece to the heat of the scene around him. But, around Rogue, I used many different compositional elements, the fiery embers, smoke tendrils, missile trails, to guide the viewers’ eye around the frame to, hopefully, create something of a narrative for viewers, giving them something of the wider story of the moment I’d presented.

In your Art Stars piece, you’ve kept all of the traditional elements of Rogue Trooper, but managed to pack the piece with such action and intensity. Your painted art would indicate, at least to me, some love of the great artists working in this style, the George Pratts and their like?

ES: I love a narrative piece and I love the idea of the human condition, or in this case the genetically modified human condition. It’s hard to put yourself in this character’s shoes but I wanted to immerse the viewer in this moment on the battlefield- almost a tactile, sensual quality- they can smell the fumes, the smoke and feel the burning embers. My ‘go to’ for references is generally classical fine art even when I am working on film projects. And I do love a digital piece that blurs the lines between traditional oils and Photoshop, I often bring elements or texture from my fine art pieces into my commercial work and have painted a number of pieces purely in oils or acrylic for other sci-fi properties. I am a big fan of George’s work and his impartial approach to traditional media. When it comes to the representation of war and the human condition you can’t go past Pratt’s art. Similarly, there’s an Australian war artist, Ivor Hele, whose draftsmanship and dynamism in his figure work is just incredible.

Now that you’ve had that first experience of being in the pages of a Prog, is it something you’re going to be pursuing further?

When did you first see Rogue Trooper in the pages of 2000 AD and what was the impact of the strip upon you?

ES: The first thing I remember about Rogue Trooper is that incredible Dave Gibbons’ artwork. I can’t remember the particular Prog, but that art left a great impression, as did Cam Kennedy’s work when I discovered that sometime later on. With comic books I would generally follow the artist rather than the book. The whole sci-fi, post-apocalyptic imagery and ideas was what got me.

And expanding that a little wider, when did you first pick up 2000 AD? I suppose growing up in Australia it was slightly more difficult to get hold of?

ES: I’m now going back through old issues rediscovering a lot of the stories. I have a bunch of old 80’s original issues but being here in Australia it was a challenge to follow as we didn’t always have access to the books. It’s great to see the Complete Case Files of Judge Dredd more recently collected which is a good way to spend a Sunday afternoon with a nice strong coffee.

When did you first start making art and are you professionally trained, or self-taught?

ES: It’s hard to remember but I have always drawn, I found it the easiest way to express myself from a very young age. Commercially I started selling work around age 16 depicting how Christmas displays would look for shopping centres. During school, art was my focus and primary outlet inspired by contemporary artists of the time and the classic masters. I’ve always worked in creative industries however I was mainly self taught until I enrolled and was granted a scholarship at the Julian Ashton Art School in Sydney around 2009.

Can you give us an idea of your background, what you do professionally, where you see your art at the moment?

ES: I’m a traditional artist and digital artist working in the film and entertainment industries. I’ve had the pleasure of working with some of the top directors in the world and creating art on projects such Alien: Covenant, 300, Mad Max: Fury Road, Gods of Egypt and The Chronicles of Narnia. I also paint in traditional media with a focus on narrative and figurative work.

Classifying a particular stage of my art is always difficult- as a creative it is a life long endeavour; ‘Always the student and never the master.’ That said, after 20 years in the entertainment industries I regularly teach workshops in Australia yet also attend workshops internationally when I can to expand on my own education. Your work constantly grows and shifts as you start to narrow down your self-expression, however my commercial digital approach hasn’t changed that much and I often like to focus on the narrative, mood and atmosphere with my pieces.

What influences are there upon your art? I know we’ve already talked about certain comic artists that might have influenced you, but let’s take it far wider…

ES: In addition to those comic artists mentioned already, Dave Gibbons, Cam Kennedy, George Pratt, there’s John Buscema, Mike Mignola and Philippe Druillet. But there are many artists that inspire me from the classics, Rembrandt to Delacroix, to more contemporary artists, such as Zdzisław Beksiński and Phil Hale’s dark, dynamic work. Also the Australian Impressionists and their sense of light and atmosphere have had a massive impact on my work and with most of their art hanging in the Capital cities here in Australia I make regular trips to view it up close.

Finally, what about plans for the future, both 2000 AD and beyond?

ES: I’ve been lucky with opportunities in the film industry, am very grateful and will continue with these projects but I would like to push further into the graphic novel realm with 3 projects that I have on the back burner. I am also very partial to opportunities for cover work on a number of properties that I think my style could suit!