MEGAZINE 400: Eglington and Cook on the return of Blunt 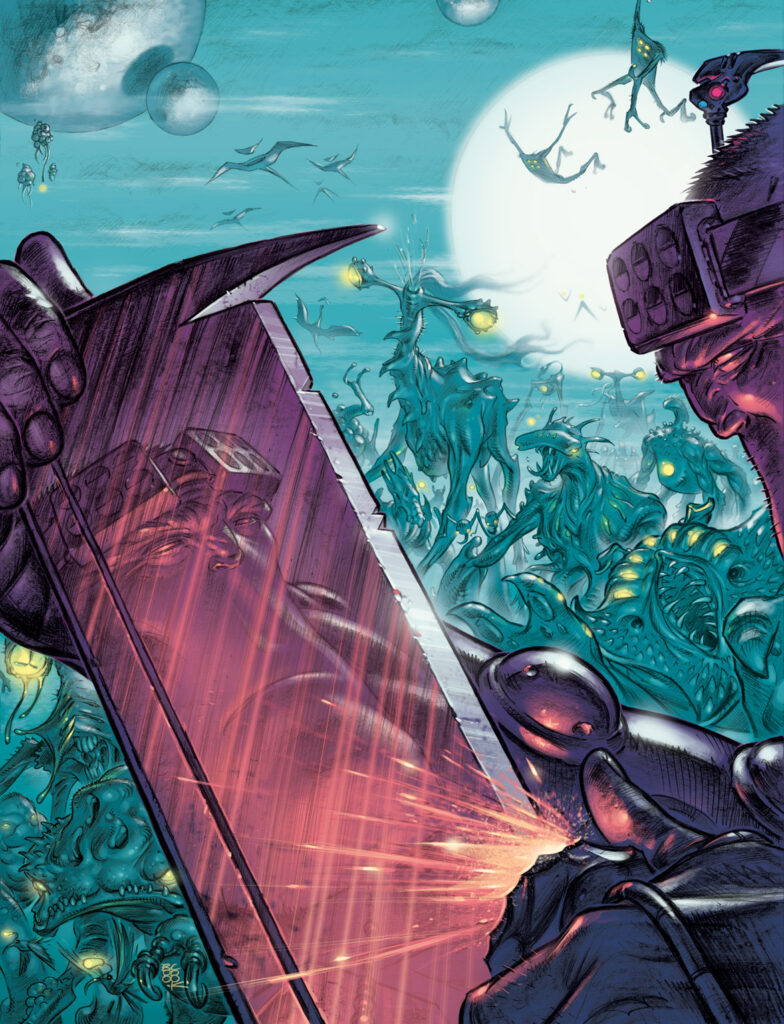 The massive 400th issue of the Megazine hits shops on 19th September, absolutely packed with classic Thrill-Power courtesy of some of the best in the comics biz!

One of the highlights will be the return of Blunt from TC Eglington and Boo Cook, where we return to the lush organic delights of Getri-1 and discover just what’s happening with the surviving colonists and their mutie/uplift pro-tector, Blunt.

Richard Bruton talks to Eglington and Cook about psychedelic plant life, lush organic art-work, and whether humanity really is a virus…

Blunt II begins this September in the Megazine 400 for a new eight-part run. In the first series (Megazine 372-379), we were introduced to the lush and beautiful colony of Genti-1, complete with its Mega-City One colonists, uplifts, and the mysterious Blunt. What can you tell us about that first series and where you’re taking the story in this second part?

TC Eglington: The first series involves Blunt getting involved in a rescue mission to save a crashed ship and its essential supplies. He befriends Ilya, a feisty teenage girl determined to find her moth-er, but the mission soon descends into chaos as the planet’s sentient ecosystem fights back, creat-ing a virus that mutates the colonists into dangerous predators.

This second series explores more of the planet and how it has evolved, as well as aligning the story more generally with the Dreddverse. Blunt is again at the centre of things, but the dangers are greater and the scale of events larger, with the entire colony at risk of destruction.

Boo Cook: The first series of Blunt was definitely a set-up story for the world, Blunt himself and the large ensemble cast. Now that the cast has been whittled down considerably we really get to see people coming into their own as their characters develop. Also, we get to find out what’s really been happening on the planet – in particular the full revelations relating to the mysterious tribe that appeared in the final episode of series one; without saying too much, there’s a reason they all have a *certain look*… on top of that there is the background thread of the whole Terence McKenna ‘nature is alive!’ vibe to the planet itself which ramps up considerably with dramatic ram-ifications.

And, if that wasn’t enough, the introduction of a well known third party adds layers of chaos even McKenna would struggle with!

The end to Blunt in Meg 379 left things hanging – was this a deliberate thing leading into this sec-ond series, or merely a tentative thing whilst you waited to see if the second series was happen-ing?

TCE: We knew at that time there was going to be a second series, so it seemed a good way to give a teaser for it. Also, there’s something satisfying about a grueling story of survival ending with the realization that the protagonists are out of the frying pan and into the fire.

How did you find the reaction to that first series of Blunt?

TCE: The reaction to the first series has been great. I think people loved the mix of wild action, gory mutations, and psychedelia. We consciously went for a different look and feel to previous colony stories. Hopefully that paid off.

BC: There’s a feeling that Megazine strips, particularly brand new ones, can go slightly under peo-ple’s radar in comparison to major strips in the weekly Prog. But, I’ve spoken to quite a lot of folks online and at conventions who seemed to really enjoy it – which has been great to hear. I think Tom and I are gaining a reputation for massive psychedelic mayhem with our collaborations and Blunt II certainly won’t disappoint on that score!

Boo, I was reading an old 2010 interview you did for the FPI Blog, where you talk of Damnation Station and it connecting with your “old skool sci-fi sensibilities; big bleak moonscapes, detailed space suits, wrecked spacecraft and tangible characters”. Seems to me, barring the tangible char-acters, you couldn’t get much further from that than the organic creations of Blunt?

BC: Well, wrecked spacecraft definitely have a part to play in Blunt II but those old skool sci-fi sen-sibilities can cover a lot of ground, amongst which aliens, mutants, and crazy worlds all play a big part!

Further on in that interview from 2010, you mention Blunt for the first time as a forthcoming co-creation between you and TC – so, how did the collaboration come about, and why did it take six years from that first mention to seeing it in Meg 372?

BC: Because we’re lazy gits! Seriously, drumming up a pitch for a whole new series takes a vast amount of work – from plot outlining, character fleshing out, world building plus all the visual con-cept work. It took me many, many drawings to finally come up with the face of Blunt too – he’s a man/beast of few words so his face really needed to sum up his attitude instantly.

The setting for the strip changed radically from the start too – initially the world was much farther on in terms of colonization, with Blunt running a business taking young hipsters from the big new city on ‘outback tours’ but many of the recognisable themes were in place. The actual pitching to editors takes a lot of time too and can introduce hefty overhauls into the mix – Matt Smith, for example, suggested that he’d be happy to give the strip a go if we could set it in the larger Dreddverse, a change that we were only too happy to make.

TCE: Originally, we wanted to create a sci-fi strip together that involved some of our favourite sci-fi topics. Blunt came about from a mix between story ideas I was working on and a character Boo had drawn that fitted the bill perfectly. That first concept was a planet where biotech meant every-body had started adapting themselves with living suits to enhance their bodies, but Blunt was the one exception – the kind of brute force of human nature that is completely resistant to change. He developed over time and the story changed to fit with the Dreddverse, as it fitted nicely with the Uplifts and the colony scenarios. I’m still not sure why it took so long to reach the printed page. We always seemed to have different things we were working on at different times, but eventually it came together.

It seems to me there’s an environmental fable wrapped in a bit of classic sci-fi going on with Blunt, plus the ideas of humans as an invasive species, sitting above any natural ecosystem, de-stroyers of all they touch. How much of this did you design into the initial ideas of Blunt and how much came through in its development?

TCE: I was really interested in involving an environmental aspect to the strip, as it seems a fitting subject for sci-fi. There was a tagline I used for the first story that ran along the lines of ‘Colonists try to adapt a planet for the benefit of mankind, only to find themselves adapted by the planet for its benefit’. Although it’s done in an extreme way here, it summed up the idea of humans sudden-ly finding themselves being radically changed by their environment. I like the idea that homo-sapiens might just be another stage of evolution, not the final product.

In this second series, I’ve kept some of those concepts going, particularly the idea of humans as an invasive species, and that maybe our impressive advances as a species are intrinsically connected with environmental damage. It’s like that George Bernard Shaw quote about all progress depend-ing on the unreasonable man. Here, humans are an unreasonable species.

Funnily enough, the first incarnation of Blunt we worked on involved humans trying to find re-demption from all their environmental destruction by using advances in genetics to de-extinct spe-cies, with the technology spiraling out of control. So I guess some of those ideas carried over years later.

BC: The great thing about coming up with a sci-fi tale is that it can be used as a microcosm, be that of the human condition or our relationship to a certain aspect of existence. With Blunt, obviously, humans are pretty slack about caring for their living environment so we thought it’d be a great start to have them attempt to terra-form a planet but have the planet terra-form them instead.

Also, there’s a lot to be said for using strong characters to create microcosms within microcosms to espouse further allegorical elements – something which Tom does with great aplomb. On top of that there is the over-arching McKenna vibe of all organisms being linked/part of a greater whole and awareness of this through psychedelics which is something we are eager to promote in a balls out action way as opposed to a whimsical, unicorn hugging fashion.

Boo, Blunt is certainly a departure of sorts from your previous work – the world building involved with a new strip is there of course, but the beautiful organic nature of the artwork is something that really sets it apart. Can you talk us through the ideas behind the design of the world of Blunt and some of your process in creating what we see on the page? Do I see elements, or at least a love of, Brendan McCarthy’s layouts and psychedelic imagery in your work on Blunt?

BC: Brendan has always been right at the forefront of my influences from an early age – his work on strips like Sooner Or Later, Chopper in Oz etc. hit me like a day glow freight train and it’s been lodged in my frontal lobe ever since. Getting the chance to have some tripped out fun with the visuals has been great, and there’s plenty more to come!

A strip like Blunt is very freeing in many ways – freedom from drawing anything regular or normal, which can be a little tedious for me at least, even freedom from drawing solid realistic anatomy as there are plenty of mutants in series two where I would literally draw a massive squiggle that fulfilled the compositional requirements of the page and turn that into a huge swaggering beast: maximum fun.

Also, I think Tom is quite happy for me to go off piste with the scripts a bit when it comes to the crazy stuff and I’ll add in a background made up of a tessellating network of the wee square mon-key guys (Splonges to be technical), or somebody getting a nasty case of ‘fractal fingers’. I guess that comes out of a process of thinking about how to portray the script, then once that’s safe think about it again, then REEEEAAAAAALLLLYYY think about it until you’ve pushed it almost off the edge of the plot cliff. All of which stems from the marvelous mind seeds planted by Tom.

And, finally, what’s coming up next for you both?

BC: I’m still involved with Elephantmen comic which has found a new home with Comixology, so expect more covers from there, plus Tom and myself are working on a typically messed up and psychedelic Dredd tale for the Xmas Prog. Plus, we’re hoping that Blunt II will go down well enough to merit a third outing… also, as I absolutely love working with Tom we have several new ideas in the long drawn out conception process that will be hitting the pitching zone soon. They will be probably be psychedelic.

TCE: We’ve just collaborated on a Dredd together, which is a real fun one. It’s a standalone tale that’s absolutely perfect for Boo’s art, full of weird visions, classic Dredd action, and some heroic eggnog.

The bumper Judge Dredd Megazine #400 is out on 19 September!