The veteran artist on Medivac 318, Trash, Red Razors, and Strontium Dogs has died at the age of 56 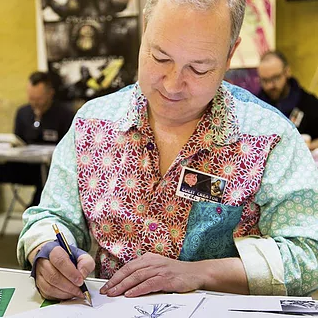 Everyone at Rebellion is shocked and saddened to hear of the sudden death of artist Nigel Dobbyn at the age of 56.

Based in the north east of England, Dobbyn’s first works for 2000 AD were a trio of Future Shocks in 1988. These were followed by his debut on new space medical series, Medivac 318, written by Hilary Robinson and based on her previous writing.

The series, which followed an ambulance crew working in the midst of an interplanetary war, showcased Dobbyn’s unmistakeable style, his strong storytelling and clear lines giving all of his work a solidity and openness that was often at odds with the prevailing fashions in comic art at the time.

His colour work was bold and striking but also grounded and earthy – his work on future eco-cop series Trash (Progs 760 to 770), written by Paul Kupperberg, contrasted the greys of urban decay with lush greens and bright flower colours. He also had a skill for action and his work on Red Razors with Mark Millar and Garth Ennis’ Strontium Dogs stories featuring Johnny Alpha and Wulf Sternhammer’s furry sidekick Gronk, as well as Peter Hogan’s spell on the strip, demonstrated his ability to draw convincing, involved and energetic action scenes. He recently returned to 2000 AD for a series of single Ace Trucking Co. stories.

His style was just as easily adaptable to comics aimed at children and young peple and, thanks to his connections with former 2000 AD editor Richard Burton and writer Nigel Kitching, in the 1990s Dobbyn began work on Sonic the Comic, based on the massively popular Sonic the Hedgehog video game character, and later became a permanent feature of the line-up alongside artists such as Richard Elson. He worked on Dark Horse’s Digimon, Classical Comics’ Shakespeare adaptations, and Panini’s Spiderman and Friends. He also wrote and drew Billy the Cat for The Beano and produced the art for a graphic novel adaptation of Nightrise by Anthony Horowitz.

He recently worked on a series of three HP Lovecraft-inspired books for Arcturus Publications, Goblin Princess for Redan’s Sparkle World magazine, and Norse myth-based strip 28AR for new comic strip anthology Brawler. He wrote and drew the Saxon Princess comic strip on display at Kirkleatham Museum in Redcar and was working on a strip for digital anthology Aces Weekly.

Matt Smith, editor of 2000 AD, said: “Everyone here at 2000 AD was shocked and saddened to hear of Nigel’s death, and our deep condolences got out to his family. He was fantastically adept artist, equally capable of conveying the deep-space drama of Medivac 318 as he was the manic energy of the Strontium Dogs Gronk stories. A regular contributor to the Prog during the 1990s, his clear storytelling, strong lines and bold colours made him an instantly recognisable presence. Although he’d dropped out of the comic in the noughties, he came back recently to draw some Ace Trucking one-offs, and he did a beautiful job on the characters, instilling the pages with the humour and action he did so well.”

The deepest sympathies and condolences of everyone at 2000 AD and Rebellion go out to Nigel’s family and friends.