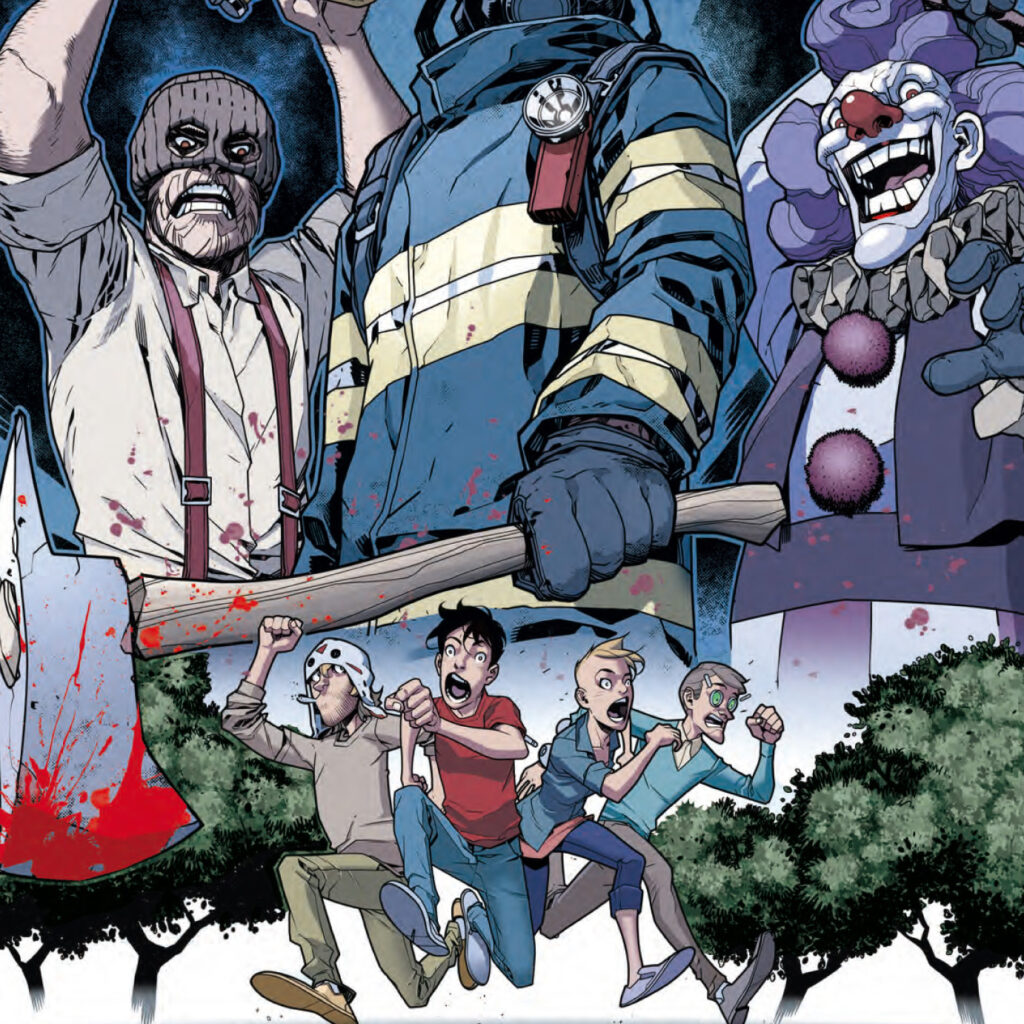 Welcome to the source of all that is scrotnig and zarjaz in this otherwise dull and workaday universe — 2000 AD Prog 2097 is out now!

Inside this pulse-pounding Prog you’ll find more circuit-shattering excitement in the shape of Judge Dredd, The Order, Survival Geeks, Grey Area and Mechastopheles, the stories thundering towards their respective climaxes in a mere fortnight before Prog 2100 lands on shelves and digital devices!

2000 AD Prog 2097 is out now from all good newsagents and comic book stores, plus digitally from our webshop and apps! Don’t forget that if you buy an issue of 2000 AD in the first week of its release then postage in the UK is free!

JUDGE DREDD // THE BOOTH CONSPIRACY
by TC Eglington (w) Staz Johnson (a) Abigail Bulmer (c) Annie Parkhouse (l)
Mega-City One, 2140 AD. Home to 100 million citizens, this urban hell is situated along the east coast of post-apocalyptic North America. Crime is rampant, and only the Judges — empowered to dispense instant justice — can stop total anarchy. Toughest of them all is JUDGE DREDD — he is the Law! Now, a terror cell called the Sons of Booth are attempting to bring down Justice Department…

SURVIVAL GEEKS // SLACK N’ HASH
by Gordon Rennie, Emma Beeby (w) Neil Googe (a) Gary Caldwell (c) Ellie De Ville
Somewhere in the outer limits of space/time, plunging through the planes of reality, is what looks like a regular suburban two-up two-down, but it is in fact powered by misfiring transdimensional technology. Inside live sci-fi obsessives Clive, Rufus and Simon, plus reluctant housemate Sam and pet Cthulhu Howard: explorers on the edge of beyond. Now, they’re on a world plagued by murderous Slashers…

THE ORDER // THE NEW WORLD
by Kek-W (w) John Burns (a) Annie Parkhouse (l)
Throughout history, mankind has been under threat of extermination by the Wyrms, creatures from another plane that systematically break into our reality. Defending humanity are the men and women of THE ORDER, a secret band of warriors that have fought the entities across the centuries. But the Wyrms have fractured time, noble robot knight Ritterstahl has been lost, and Anna Kohl is determined to find him…

MECHASTOPHELES // TRUE FAITH
by Gordon Rennie, Lawrence Rennie (w) Karl Richardson (a) Simon Bowland
It is over a year since the Fall, when the demons rose and society collapsed. A band of survivors have sought refuge in a demonically powered robot called MECHASTOPHELES, and they use this infernal ark as a means to seek sanctuary and find other refugees. But Mechastopheles needs repairing, and has been granted passage into the city of Benedictia. However, the authorities have plans for him…

GREY AREA // OBJECTIVES
by Dan Abnett (w) Mark Harrison (a) Ellie De Ville (l)
The mid 21st century. Earth has a heavily armed defence network, and any ETs arriving on the planet are housed in the Exo Segregation Zone, known as the GREY AREA, which is policed by squads of Exo Transfer Control officers like Captain Adam Bulliet and his team — wife Birdy, linguist Kymn, weapons expert Feo, and alien transfer Resting Bitch Face. But Kymn and Bitch, thought KIA, have actually be seconded to a black-ops unit…