The iron fist of the law comes down hard on perps - literally! New thriller 'Machine Law' by John Wagner and Colin MacNeil begins this Prog! 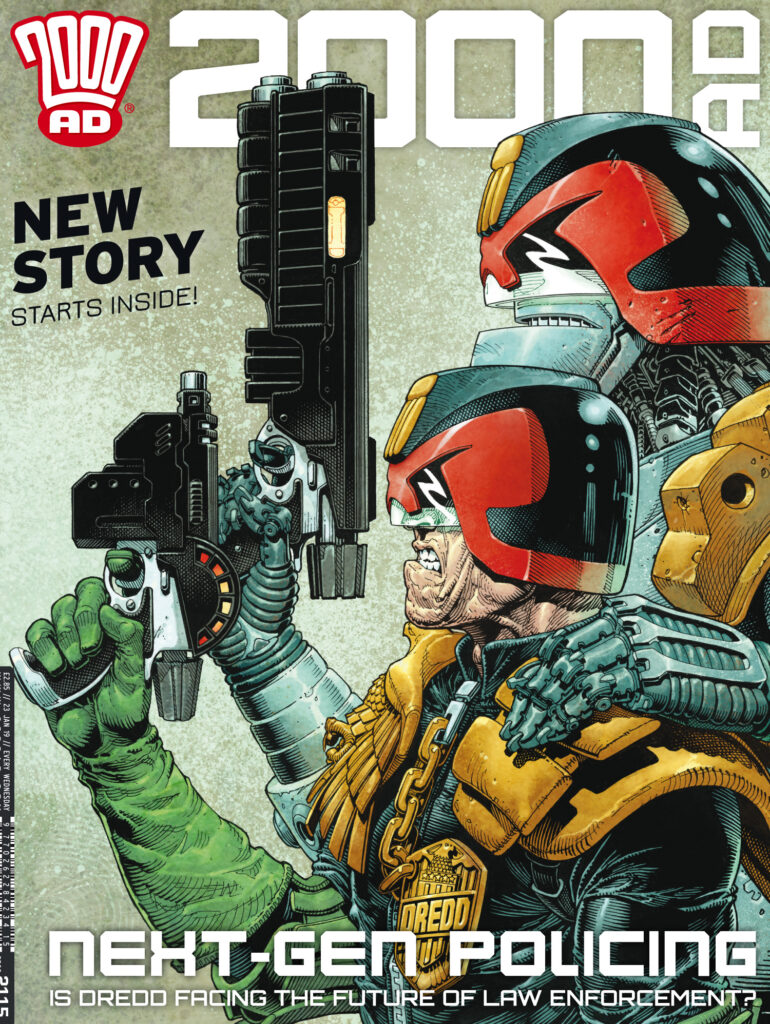 It’s that time of the week again, Terrans, when my droids and I get to pile-drive another thirty-two pages of scintillating sci-fi into your central lobes — and what stories await you!

There’s more tense action in Brink and Skip Tracer, Fiends of the Western Front comes to its batty finale, we commence another of my 3rillers in the shape of the supernatural Keeper of Secrets by Robert Murphy and Steven Austin, and the creative combo that brought you America, Song of the Surfer and Mechanismo — John Wagner and Colin MacNeil — reunite once again for the start of a new Judge Dredd story Machine Law, picking up the plot threads from Harvey that ran in Progs 2024-2029.

Ol’ Stoney-Face hasn’t been slow to voice his displeasure at robot Judges appearing on the streets of MC-1, and although these next-generation models have been programmed to empathise with the citizens he still believes that a machine having the power of life and death over a human being is a bad idea. In the past he’s been shown to be right — but there’s no denying that the Mark 8s are proving effective. Could these droid law-enforcers be the future of Mega-City policing? And will Joe stand for it? Keep watching the progs, humes!

2000 AD Prog 2115 is out now from all good newsagents and comic book stores, plus digitally from our webshop and apps! Don’t forget that if you buy an issue of 2000 AD in the first week of its release then postage in the UK is free!

Cover by Cliff Robinson (a) and Dylan Teague (c)

JUDGE DREDD // MACHINE LAW
by John Wagner (w) Colin MacNeil (a) Chris Blythe (c) Annie Parkhouse (l)
Mega-City One, 2141 AD. Home to over 100 million citizens, this urban hell is situated along the east coast of post-apocalyptic North America. Crime is rampant, and only the Judges — empowered to dispense instant justice — can stop total anarchy. Toughest of them all is JUDGE DREDD — he is the Law! Robot Judges have been trialled before, with disastrous results — but now the new generation are appearing on the streets…

BRINK // HIGH SOCIETY
by Dan Abnett (w) INJ Culbard (a) Simon Bowland (l)
The late 21st century, and through environmental catastrophe and industrial overload Earth has been reduced to a wasteland. Mankind finally evacuated the planet in 2072 and millions were housed in a number of deep-space Habitats. Bridget Kurtis, investigator with the HSD, has gone undercover on Yuliya Habitat to look into sect activity, and now she and fellow officer Ludo Gentry are confronting the ringleaders…

SKIP TRACER // LOUDER THAN BOMBS
by James Peaty (w) Paul Marshall (a) Dylan Teague (c) Ellie De Ville (l)
The Cube, the 27th century. This vast city floating in the depths of space was once a monitoring station, but has been refitted by the Earth-led Consociation as a solution to a universal housing problem. It’s now home to every kind of undesirable and wanted criminal. That’s where SKIP TRACER Nolan Blake comes in, a former soldier turned tracker, with powerful psi-abilities. Now, Blake must investigate a terrorist cell…

THARG’S 3RILLERS: KEEPER OF SECRETS
by Robert Murphy (w) Steven Austin (a) Pippa Mather (c) Ellie De Ville (l)
Three episodes, one complete, self-contained story — a condensed hit of super-charged Thrill-power beamed to you directly from the Nerve Centre! London, 2019, and during the day Jon Tanner is an apprentice butcher at Smithfield Market. At night, he likes to live it large at the capital’s many clubs — but when he meets a young woman called Jemima on the dancefloor, he’s responsible for unleashing a dangerous ancient entity…

FIENDS OF THE WESTERN FRONT
by Ian Edginton (w) Tiernen Trevallion (a) Annie Parkhouse (l)
In 1980, the diary of German soldier Hans Schmitt was discovered in Berlin, detailing events that occurred in 1941, when he and his comrades encountered the terrifying Captain Constanta and his Romanian platoon, who feasted on the blood of their Russian enemies. But Schmitt was not the first trooper to encounter Constanta on the battlefield — the vampire was on the Western Front too, in France in 1916. Now, Constanta is battling the giant bats of the Black Max…