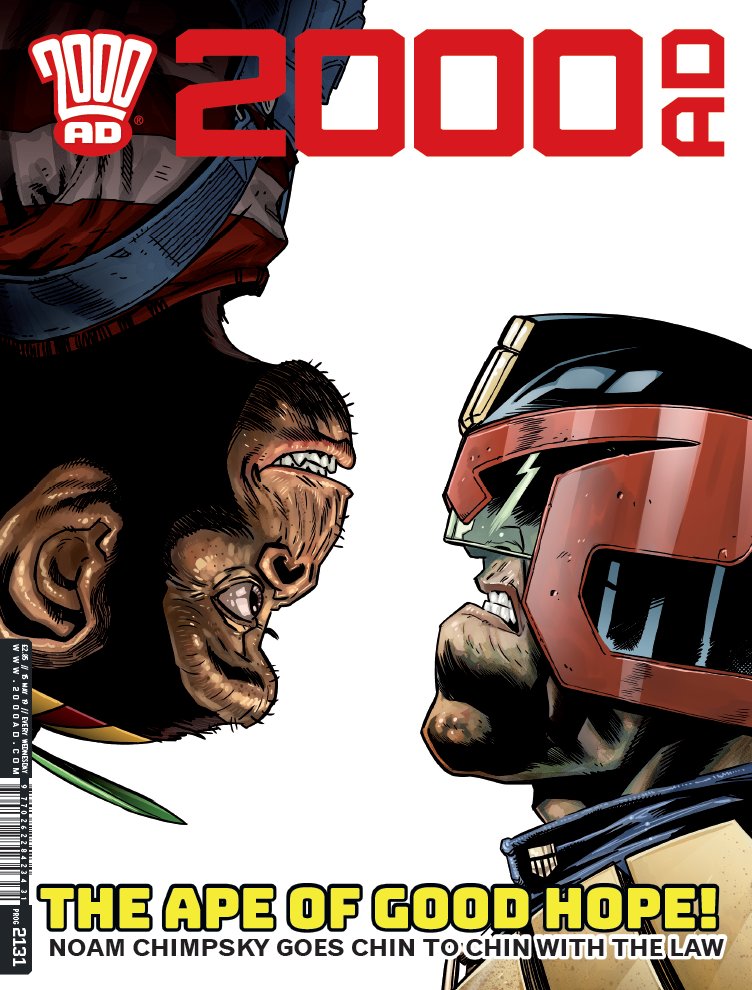 It’s that time of the week again, Terrans, when we get to supercharge your imaginations with the finest in fantasy and sci-fi!

After last week’s takeover by Tharg’s nephew – Joko – we resume our regular business, with Max Normal, Scarlet Traces and Kingmaker carrying on where they left off a fortnight ago, plus a complete Dredd thriller from the Niemand and Holden droids, and the start of another Tharg’s 3rillers from James Peaty and new ‘bot on the block Brian Corcoran!

If that wasn’t enough to keep your diodes happy, also hitting the  shelves of your local Thrill-merchant this week is Megazine #408, which features the scrotnig conclusions to both the Dredd story The Crazy and Storm Warning, plus the penultimate instalments of Lawless: Ashes to Ashes and The Torture Garden, plus a complete Tale From the Black Museum by Rory McConville and Neil Googe.

Add to that interviews with art-droids Geoff Senior and Abigail Bulmer, and the first half of classic Starlord strip Mind Wars, and it’s another Thrill-packed package!

2000 AD Prog 2131 is out now from all good newsagents and comic book stores, plus digitally from our webshop and apps! Don’t forget that if you buy an issue of 2000 AD in the first week of its release then postage in the UK is free!

JUDGE DREDD // THE WORLD ACCORDING TO CHIMPSKY

Mega-City One, 2141 AD. Home to over 130 million citizens, this urban hell is situated along the east coast of post-apocalyptic North America. Crime is rampant, and only the Judges — a zero-tolerance police force empowered to dispense instant justice — can stop total anarchy. Toughest of them all is JUDGE DREDD — he is the Law!

1968. It is decades since Mars waged war on Earth, and the major nations have access to Martian-derived technology, but Britain is still recovering from Martian bombardment in the 1940s, when much of the south of England was destroyed. This was followed by the arrival in the 1950s of two million Venusians, seeking refuge from Martian occupation. Now, the Martians have weaponised the sun, and are on the attack…

MAX NORMAL // HOW THE MAX GOT HIS STRIPES

Mega-City One, 2141 AD. MAX NORMAL was once Dredd’s go-to informer, the Pinstripe Freak who had his ear permanently to the slab, the shuggy-playing legend with a taste for shampagne and the high life, who cruised the streets of the metropolis picking up all manner of info. Forty years later, he’s left much of his nark larks behind him, and he’s now bought up old shuggy hall the Golden Pocket, a pivotal place in his childhood…

Three episodes, one complete, self-contained story — a condensed hit of super-charged Thrill-power beamed to you directly from the Nerve Centre! The Grind is a sprawling mega-city, where the divide between the haves and the have-nots is decidedly pronounced. Those that lack the credit are classed as ‘Dubes’ — short for ‘morally dubious’ — and are left to languish in the dark corners of the metropolis…

The people of the Nine Kingdoms may have defeated Ichnar the Wraith King to live in relative peace and harmony, but they hadn’t reckoned on the Thorn — a race of aliens that occupied their world with the intention of strip-mining its magic. Wizard Ablard, ork Crixus and dryad Princess Yarrow believe they may have the means to stop them — not least because Crixus can somehow manifest the Ebora, the world-spirit…