The latest issue of the Galaxy’s Greatest Comic sees brand new Dredd and Quilli stories, plus more Scarlet Traces, Kingmaker, and the finale of Max Normal! 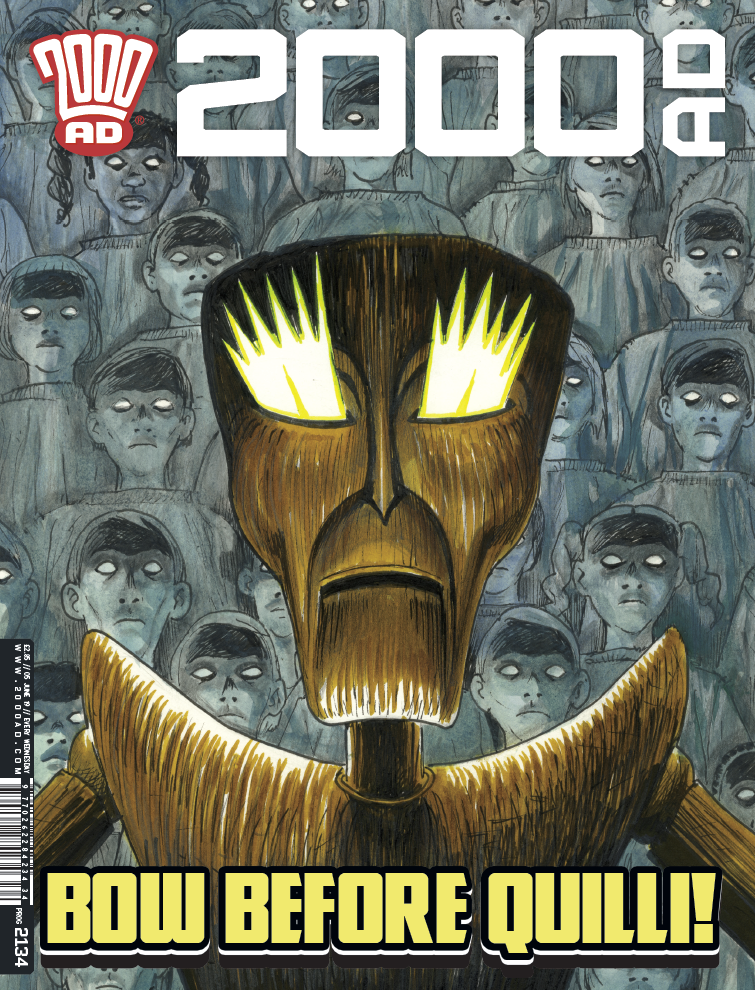 Supplicate yourselves before the creepy puppet creature that is cover star Quilli, for the ancient god/ventriloquist’s dummy is back for a follow-up to the Bailey and Hitchcock droids’ eerie Terror Tale from last year!

Also reuniting this prog is Rob Williams and Henry Flint, who provide the complete Judge Dredd thriller Pets that acts as something of an epilogue to their highly popular saga The Small House, originally published in autumn 2018.

Look out for the zarjaz collected volume coming your way in September, complete with a spiffy new cover from the Flint art-bot)!

There’s also more zarjaz action from Scarlet Traces and the action is ramping up in more Kingmaker.

Alas, we must wave farewell to sharp-dressed shuggy champion Max Normal this week as his scrotnig story comes to a close, but make sure you’re back here in seven days for the start of chilling new folk-horror series Thistlebone by T.C. Eglington and Simon Davis.

When Avril escaped capture by a cult that worshipped the eponymous woodland entity, and the perpetrators were locked away, she thought her nightmare was over — but the Thistlebone myth is one that seemingly is not going to die easily…

2000 AD Prog 2134 is out now from all good newsagents and comic book stores, plus digitally from our webshop and apps! Don’t forget that if you buy an issue of 2000 AD in the first week of its release then postage in the UK is free!

Mega-City One, 2141 AD. Home to over 130 million citizens, this urban hell is situated along the east coast of post-apocalyptic North America. Crime is rampant, and only the Judges — empowered to dispense instant justice — can stop total anarchy. Toughest of them all is JUDGE DREDD — he is the Law! Last year, Dredd, with help from Judges Giant and Maitland, took down Justice Dept operative Smiley. But not without cost…

1968. It is decades since Mars waged war on Earth, and the major nations have access to Martian-derived technology, but Britain is still recovering from Martian bombardment in the 1940s, when much of the south of England was destroyed. This was followed by the arrival in the 1950s of two million Venusians, seeking refuge from Martian occupation. Now, the Martians have weaponised the sun, and are on the attack…

Experience the terrifying side of Thrill-power with these one-off tales from beyond the veil of sanity. Whether they be ghostly goings-on that send shivers up the spine or splatterfests that sear the  retina, nothing is what it seems in these glimpses of a realm beyond our own. Ventriloquist Jerry Reginaldo claimed to be channelling an ancient god called Quilli through his puppet. Now it’s gained a cult-like following…

The people of the Nine Kingdoms may have defeated Ichnar the Wraith King to live in relative peace and harmony, but they hadn’t reckoned on the Thorn — a race of aliens that occupied their world with the intention of strip-mining its magic. Wizard Ablard, ork Crixus and dryad Princess Yarrow believe they may have the means to stop them — not least because Crixus can somehow manifest the Ebora, the world-spirit…

MAX NORMAL // HOW THE MAX GOT HIS STRIPES

Mega-City One, 2141 AD. MAX NORMAL was once Dredd’s go-to informer, the Pinstripe Freak who had his ear permanently to the slab, the shuggy-playing legend with a taste for shampagne and the high life, who cruised the streets of the metropolis picking up all manner of info. Forty years later, he’s left much of his nark larks behind him, and he’s now bought up old shuggy hall the Golden Pocket, a pivotal place in his childhood…