The latest issue of the Galaxy’s Greatest Comic sees the finale of Judge Dredd: Control, more Indigo Prime and Jaegir, a new Future Shock and all new Sinister Dexter! 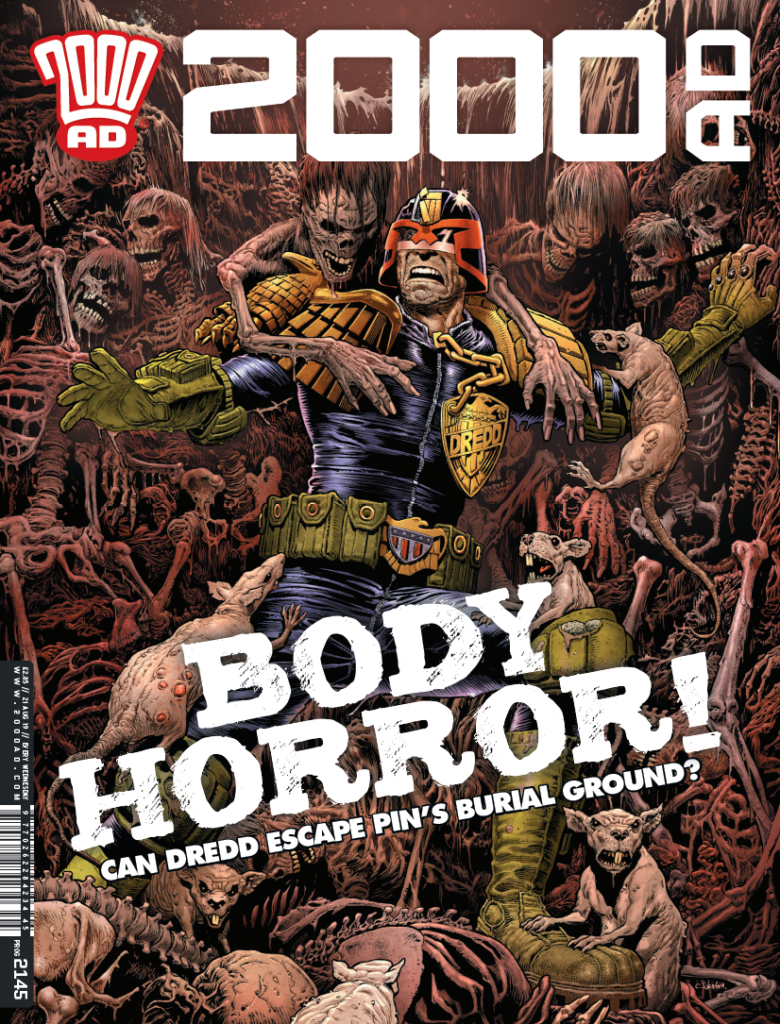 Welcome to the awe-inspiring anthology that is the Galaxy’s Greatest Comic, Terrans, and this prog we reach the nerve-jangling final episode of Judge Dredd thriller Control — can Ol’ Stoney-Face free himself from Pin’s clutches?

Plus, in addition to Indigo Prime and Jaegir, we also have the return of Downlode whackmerchants Sinister Dexter, courtesy of Dan Abnett and Steve Yeowell, and a complete Future Shock from debuting writer Erica Schultz and artist Liana Kangas, last seen around these parts drawing the Tyranny Rex tale for the 2018 Sci-Fi Special!

Equally demanding your attention, and hitting Thrillmerchants’ shelves as we speak, is the second issue of The Vigilant, Simons Furman and Coleby’s update of the Brit superheroes of yesteryear, whereby the Leopard From Lime Street, Steel Commando, Dr Sin, Blake Edmonds and more battle the nefarious plans of Dr Mesmer and Von Hoffmann.

After the success of the first special last year, The Vigilant: Legacy picks up the action, and reveals some more back story to our superteam, with guest artists Will Sliney and Jake Lynch joining the Coleby droid on particular segments.

2000 AD Prog 2145 is out now from all good newsagents and comic book stores, plus digitally from our webshop and apps! Don’t forget that if you buy an issue of 2000 AD in the first week of its release then postage in the UK is free!

Mega-City One, 2141 AD. Home to over 130 million citizens, this urban hell is situated along the east coast of post-apocalyptic North America. Crime is rampant, and only the Judges — empowered to dispense instant justice — can stop total anarchy. Toughest of them all is JUDGE DREDD — he is the Law! The insane SJS Judge Pin murders officers that fall short of her standards, and now she’s captured Dredd, rendering him blind…

INDIGO PRIME // FALL OF THE HOUSE OF VISTA – Part Seven

The multiverse. There is an infinite number of parallel realities, and all need managing in case of dimensional instability. This is where INDIGO PRIME comes in, the multiverse’s troubleshooters, whose agents — recruited post-death — are trained to deal with space/ time catastrophes. Now, following the Christhulhu event, in which Major Arcana forced the Lanzer Corporation into the open, IP’s HQ has been destroyed…

SINISTER DEXTER // DOLORES 4 EVER – Part One

Gun-sharks Finnigan SINISTER and Ramone DEXTER are the best triggers money can buy in the future city of Downlode. Having whacked Holy Moses Tanenbaum, a ganglord from an alternate dimension whose presence threatened the fabric of reality, they’ve found killing him reset the continuum, meaning no-one knows who they are, apart from hacker Billi Octavio. Now, they’re getting back to business, working for the Lizard King…

Out in the vast reaches of the universe, there are an infinite number of stories waiting to be told. These cautionary tales pass from traveller to traveller in the spaceports and campfires of distant planets, acquiring the status of legends, their shocking ends a salutary lesson in hubris. Anything is possible in these twisted trips in to the galaxy’s dark side. Abandon your preconceptions, and expect the unexpected…

The Greater Nordland Republic. While the Norts are currently engaged in a galaxy-wide war with the Souther forces, it falls to military officers such as Kapiten-Inspector Atalia JAEGIR of the Nordland State Security Police to investigate war criminals amongst her own ranks. She’s also suffering from the Strigoi curse, a fault in the Nort DNA that can bring out the beast within. Now, she’s in the hands of the Souther enemy…