The latest issue of the Galaxy’s Greatest Comic sees penultimate episodes for all stories, including Judge Dredd, Sinister Dexter, Jaegir plus the end of our Tharg’s 3riller and Indigo Prime! 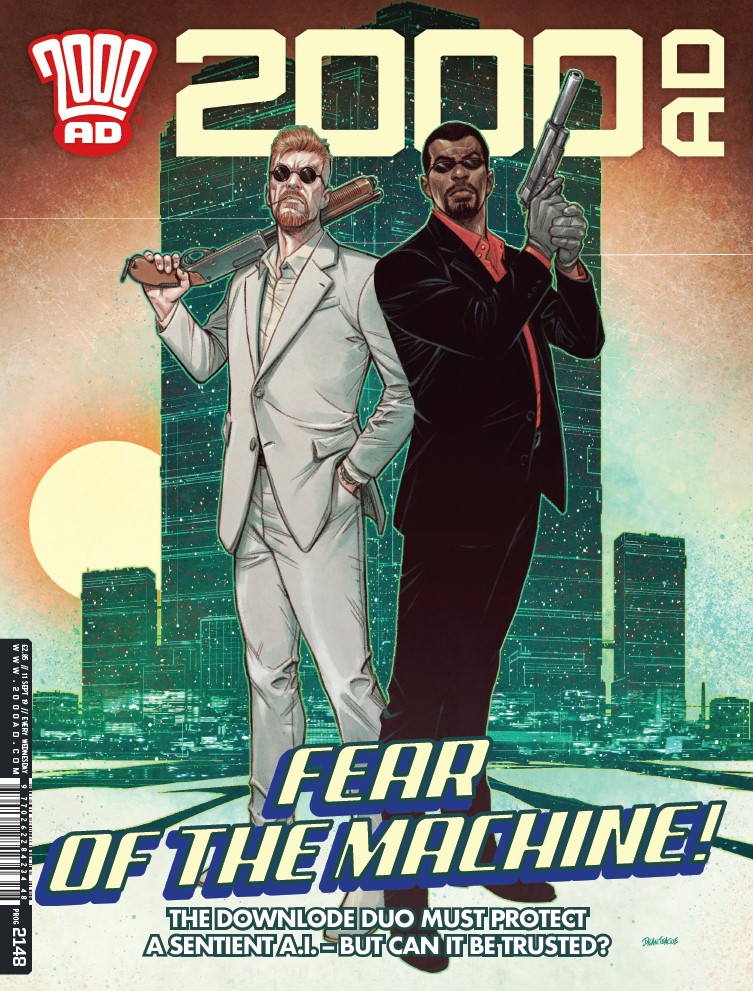 Quaequam blag, what a stuffed prog we have for you this week, Terrans — you can barely slide a flattened Gronk between the stories, and so rammed is it with zarjazosity that we’ve had to allow Jaegir to spill over onto the back cover.

Within these pages you’ll also find the penultimate parts of both Judge Dredd: The Fall of Barbarbara Grimm and Sinister Dexter: Narrow Minded plus the scrotnig final instalments of Indigo Prime and Red Road.

That means that everything wraps up in seven days’ time ready for my next bumper jumping-on issue, Prog 2150, out on 25 September!

Subscribes, and the eagle eyed of you on social media, might have seen a sneaky peek of the Dredd thriller starting in 2150, Guatemala, by John Wagner and Colin MacNeil, which of course you won’t want to miss for fear of circuit-failure — but what else will be joining it?

Well, another series that we’re excited about is Defoe: The Divisor by Pat Mills and debuting art droid Stuart Kenneth Moore, which sees the return of the seventeenth-century zombie-hunter, and this time he’s facing a threat that comes from beyond this planet. With the British and Dutch governments racing to be the first to the moon, there are otherworldly entities taking advantage of their rush into space…

This, plus new Hope, Brink, The Fall of Deadworld PLUS new Anderson, Psi-Division, Sinister Dexter AND a Future Shock means that this issue is guaranteed to thrill both of your socks off! It launches September 25th for the small price of £4.99 human money, so don’t miss it humes!

2000 AD Prog 2148 is out now from all good newsagents and comic book stores, plus digitally from our webshop and apps! Don’t forget that if you buy an issue of 2000 AD in the first week of its release then postage in the UK is free!

Mega-City One, 2141 AD. Home to over 130 million citizens, this urban hell is situated along the east coast of post-apocalyptic North America. Crime is rampant, and only the Judges — empowered to dispense instant justice — can stop total anarchy. Toughest of them all is JUDGE DREDD — he is the Law! Now, he’s using Mob-compromised Iso-Block tek-maintanance supervisor Barbarbara Grimm to smuggle for Justice Department…

Downlode gun-sharks Finnigan SINISTER and Ramone DEXTER are the best triggers money can buy. Having whacked Holy Moses Tanenbaum, a ganglord from an alternate dimension whose presence threatened the fabric of reality, they’ve found killing him reset the continuum, meaning no one knows who they are, apart from hacker Billi Octavo. Getting back to business means, however, finding the city has moved on…

INDIGO PRIME // FALL OF THE HOUSE OF VISTA – Part Ten

The multiverse. There is an infinite number of parallel realities, and all need managing in case of dimensional instability. This is where INDIGO PRIME comes in, the multiverse’s troubleshooters, whose agents — recruited post-death — are trained to deal with space/ time catastrophes. Now, following the Christhulhu event, in which Major Arcana forced the Lanzer Corporation into the open, IP’s HQ has been destroyed…

Downlode gun-sharks Finnigan SINISTER and Ramone DEXTER are the best triggers money can buy. Having whacked Holy Moses Tanenbaum, a ganglord from an alternate dimension whose presence threatened the fabric of reality, they’ve found killing him reset the continuum, meaning no one knows who they are, apart from hacker Billi Octavo. Getting back to business means, however, finding the city has moved on…

The Greater Nordland Republic. While the Norts are currently engaged in a galaxy-wide war with the Souther forces, it falls to military officers such as Kapiten-Inspector Atalia JAEGIR of the Nordland State Security Police to investigate war criminals amongst her own ranks. She’s also suffering from the Strigoi curse, a fault in the Nort DNA. Now, she’s being tortured by the Southers, while other parties are moving to free her…