The latest issue of the Galaxy’s Greatest Comic sees more new Dredd, Brink, Defoe, Hope and The Fall of Deadworld! 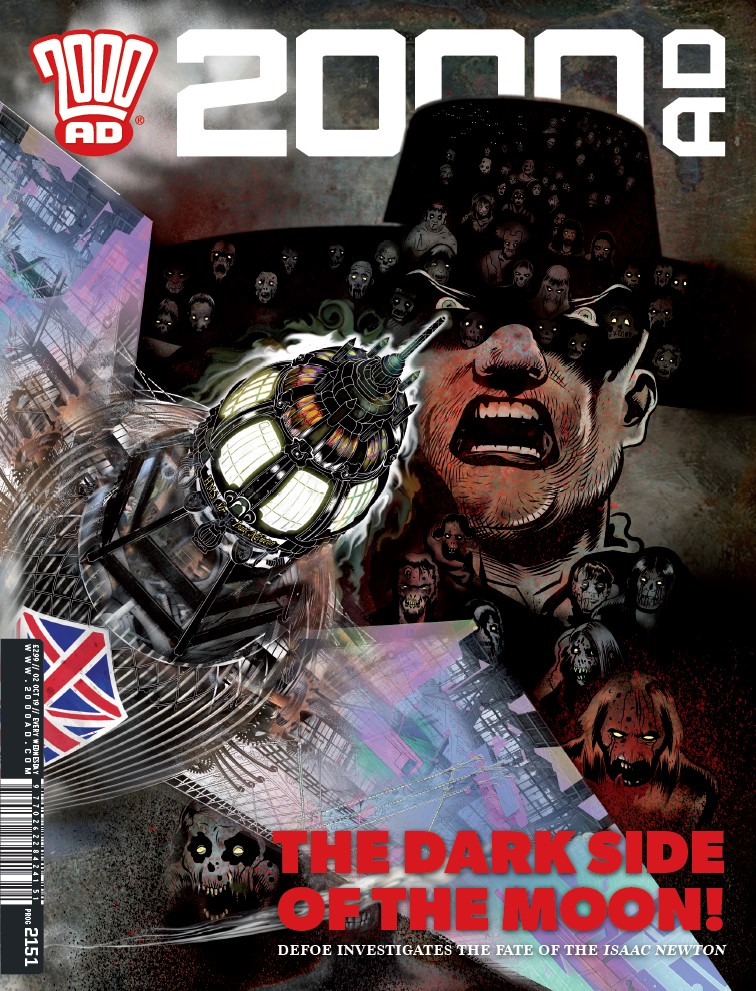 Welcome, Terrans, to the eye-popping weekly wonder that is the Galaxy’s Greatest Comic, and I trust your Thrill-circuits have suitably recovered from the bumper bombast of Prog 2150 and you’re ready for more as we plunge into the second scrotnig instalments of Judge Dredd, Defoe, Hope, Brink and The Fall of Deadworld.

Alas, such quality creativity comes at a cost, and given how much manufacturers are charging for lube these days — without which my droids wouldn’t be able to activate each morning — I’ve had to increase the cover price of 2000 AD to £2.99 from this issue. But on the plus side, subscription rates are frozen so if you want to grab your annual or monthly Thrills for a discount rate, head over to shop.2000AD.com right now — it’s better value than ever, and you’ll be able to sit back and relax, safe in the knowledge that your progs and Megs will be delivered straight to your door!

With more and more publications coming from the House of Tharg all the time, it pays to be plugged in to all the latest developments.

Make sure you sign up, if you haven’t already, to the zarjaz Thrill-Mail, the weekly email newsletter — register at 2000AD.com!

2000 AD Prog 2151 is out now from all good newsagents and comic book stores, plus digitally from our webshop and apps! Don’t forget that if you buy an issue of 2000 AD in the first week of its release then postage in the UK is free!

Mega-City One, 2141 AD. Home to over 130 million citizens, this urban hell is situated along the east coast of post-apocalyptic North America. Crime is rampant, and only the Judges — empowered to dispense instant justice — can stop total anarchy. Toughest of them all is JUDGE DREDD — he is the Law! Now, he’s travelled to the rogue nation of Guatemala, site of a robot coup, to investigate its nuclear capabilities…

London, 1668. It is two years since the city was devastated by the Great Fire. From the ashes rose the undead, hungry for the flesh of the living. Protecting the populace are zombie hunters like Titus DEFOE, a former Leveller, who now makes it his mission to rid the capital of the ghouls. Now, following the disaster of the moon-bound rocketship the Isaac Newton, he’s investigating what’s behind targeted zombie attacks…

The late 21st century, and through environmental catastrophe and industrial overload Earth has been reduced to a wasteland. Mankind finally evacuated the planet in 2072 and millions were housed in a number of deep-space Habitats. But life on these cramped, overcrowded stations is tense, with many spilling over into madness — as HSD cop Bridget Kurtis has discovered in her investigations into violent sect crimes…

An alternate 1940s USA. WWII is over, victory having been secured by occult means. Now, magic is a part of everyday life, its practitioners commonplace. Mallory HOPE is one such skilled operative, though calling on the dark arts takes its toll on the user. He’s also a private investigator, hired for all manner of down n’ dirty jobs, and now his services have taken him to New York at the behest of an old army colleague…

The planet that eventually became known as DEADWORLD was once a regular civilisation existing in a dimension parallel to our own. But the end of days is coming, and creatures known as the Dark Judges are spreading their contagion, exterminating all life. While the survivors attempt to resist the undead horde, the neighbouring Soviets have seen the chaos as an ideal time to launch an attack on their enemies…