The Dark Judges come to the DREDD movie universe in the latest edition of the Judge Dredd Megazine - plus, the return of Harry Heston! 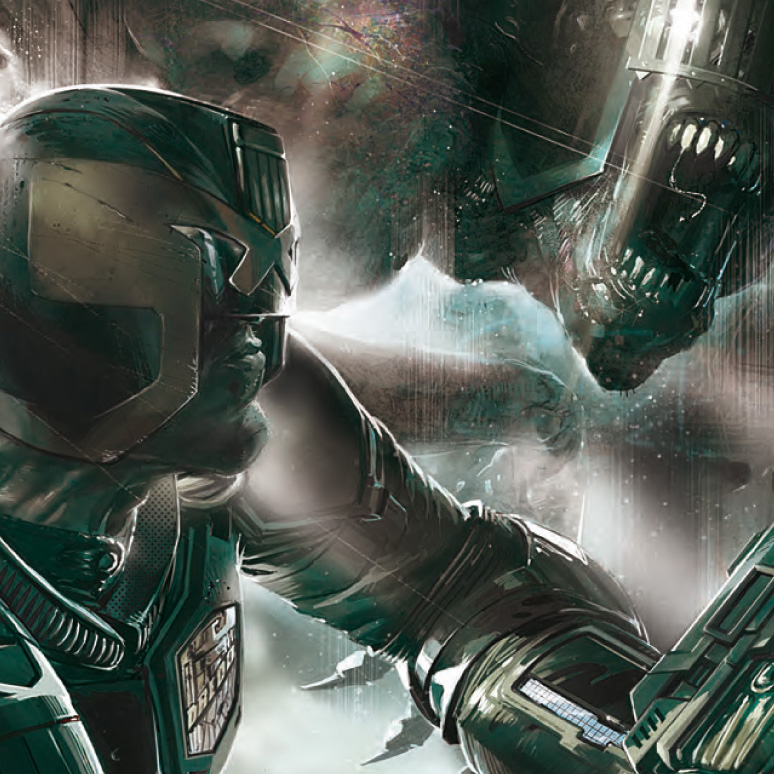 The Dark Judges make their entrance to the world of the 2012 DREDD movie in Judge Dredd Megazine #392 – out now!

The Megazine launches into 2018 with a highexplosive bang – three new stories start this issue alongside the ongoing Lawless and the penultimate part of Devlin Waugh: Blood Debt. First up we have a new Dredd thriller from Arthur Wyatt and Jake Lynch, Krong Island, which sees the return of popular law-ape Harry Heston, now operating as a Justice Department agent.

Next, another reader favourite returns after an absence of six years in the shape of Cursed Earth Koburn, the laconic Judge-Marshal created by Gordon Rennie and Carlos Ezquerra. For this latest story, The Law of the Cursed Earth, Rory McConville takes up the scripting reins as Koburn is joined by a new green partner, Alonso.

Lastly, we return to the Mega-City One of the 2012 movie DREDD for the final time with the comic-book sequel fans have been clamouring for – yes, the Dark Judges are about to make their debut in the film universe. Arthur Wyatt, Alex De Campi and Henry Flint are the architects of The Dead World – make sure you don’t miss a single episode over the next five months…

Don’t forget that if you buy this issue in print direct from 2000 AD‘s webshop within the next month you’ll not pay a penny in postage fees!

Judge Dredd Megazine #392 is out now from all good newsagents and comic book stores, plus digitally from our webshop and apps!

JUDGE DREDD: KRONG ISLAND
by Arthur Wyatt (w) Jake Lynch (a) John Charles (c) Annie Parkhouse (l)
Mega-City One, 2140 AD. This vast urban hell on the east coast of post-apocalyptic North America is home to over 72 million citizens. Stemming the tide of chaos are the Judges, empowered to dispense instant justice. Toughest of them all is Judge Dredd – he is the Law! Advances in science in the 22nd century have led to intelligent apes now having their own society in the metropolis…

LAWLESS: BREAKING BADROCK
by Dan Abnett (w) Phil Winslade (a) Ellie De Ville (l)
Colonial Marshal Metta Lawson was appointed to the frontier township of Badrock on the planet 43 Rega, intent on stamping her authority on the colony. But in doing so, Lawson made many enemies, including Munce, Inc., the mega-corporation that funds Badrock, which has attempted to have her killed. Now, Munce is planning to dispose of Badrock once and for all…

DAVLIN WAUGH: BLOOD DEBT
by Rory McConville (w) Mike Dowling (a) Simon Bowland (l)
Brit-Cit, 2140 AD. A freelance paranormal troubleshooter and exorcist for the Vatican, Devlin Waugh is the world’s foremost supernatural investigator. Despite becoming a vampire after getting bitten tackling an outbreak in an underwater prison, Devlin seeks out the finer things in life – but now he must help save his long-lost brother Freddy, who’s been accruing debts…

CURSED EARTH KOBURN: THE LAW OF THE CURSED EARTH
by Rory McConville (w) Carlos Ezquerra (a) Simon Bowland (l)
The Cursed Earth, 2140 AD. Cool and calculating Judge-Marshal Koburn is a future lawman unlike any other. A circuit Judge for the radlands, he patrols the outposts and townships that eke out a living in these desolate wastes, and tries to maintain the peace in an otherwise chaotic environment. There’s little law and order in the Cursed Earth, and Koburn likes to take it eazy…

DREDD: THE DEAD WORLD
by Arthur Wyatt, Alex De Campi (w) Henry Flint (a) Chris Blythe (c) Annie Parkhouse (l)
Mega-City One, the cusp of the 22nd century. Eight hundred million people are living in the ruin of the old world, a planet devastated by atomic war. Only one thing fighting for order in a metropolis teetering on the brink of chaos – the men and women of the Hall of Justice. One such lawman is Judge Joe Dredd, who is about to be confronted with his strangest and most challenging case yet…