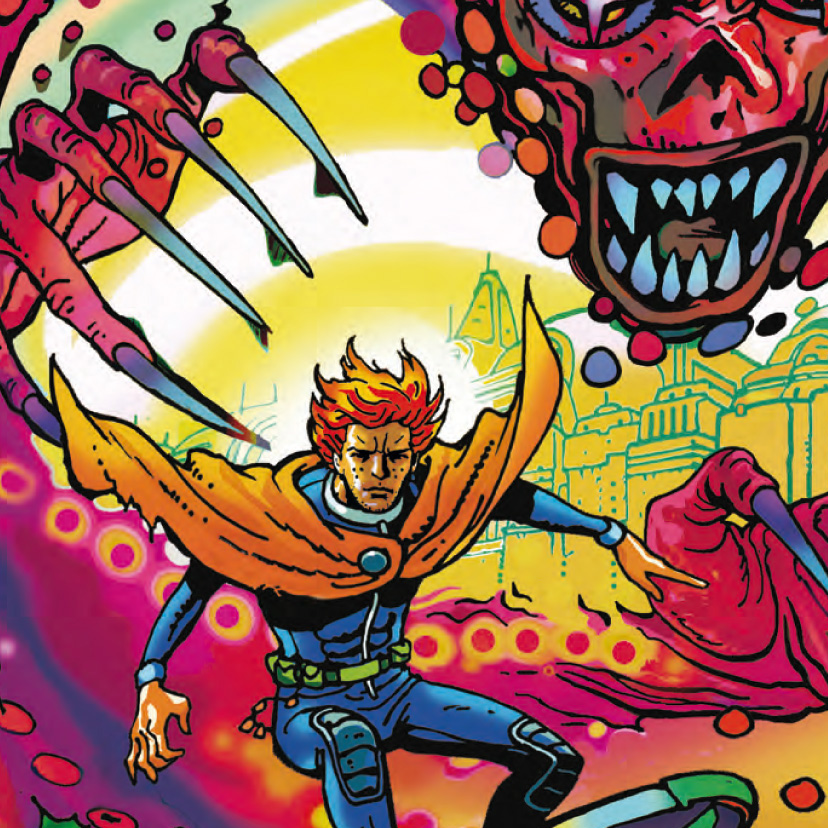 He’s surfing in on a brand new wave – Chopper is back!

The fan-favourite character returns to the Megazine this issue for his first series in the mag since Earth, Wind & Fire commenced in the very first issue way back in October 1990.

Writer David Baillie and artist Brendan McCarthy have relocated Chop to the Oz Radback, where he faces a threat that will affect the Dreamtime itself – prepare for a psychedelic Shakespeare story like none you’ve ever seen before…

Elsewhere, Krong Island comes to its apetastic finale, plus there’s more blistering action in Cursed Earth Koburn, The Returners and DREDD – and in addition we have a bonus Razorjack prologue tale from Mike Carroll and John Higgins that acts as a taster for next month’s main event: a titanic tussle between the Mega-City lawman and the murderous hell-beast herself!

Don’t forget that if you buy this issue in print direct from 2000 AD‘s webshop within the next month you’ll not pay a penny in postage fees in the UK!

Judge Dredd Megazine #395 is out now from all good newsagents and comic book stores, plus digitally from our webshop and apps!

JUDGE DREDD: KRONG ISLAND
by Arthur Wyatt (w) Jake Lynch (a) John Charles (c) Annie Parkhouse (l)
Mega-City One, 2140 AD. This vast urban hell on the east coast of post-apocalyptic North America is home to over 72 million citizens. Stemming the tide of chaos are the Judges, empowered to dispense instant justice. Toughest of them all is Judge Dredd – he is the Law! Now, he is investigating a rebellion on the ape-run Krong Island, teaming up with operative Harry Heston…

THE RETURNERS: IRMAZHINA
by Si Spencer (w) Nicolo Assirelli (a) Eva De La Cruz (c) Annie Parkhouse (l)
NEW STORY! Ciudad Barranquilla, 2140 AD. This South American metropolis, sometimes referred to as ‘Banana City’, is a notoriously poor and corrupt enclave, ruled over by a Justice Department in the pockets of the cartels. Life on its streets can be short and violent, but for four very different people death is not the end but the start of something terrifying…

CURSED EARTH KOBURN: THE LAW OF THE CURSED EARTH
by Rory McConville (w) Carlos Ezquerra (a) Simon Bowland (l)
The Cursed Earth, 2140 AD. Cool and calculating Judge-Marshal Koburn is a future lawman unlike any other. A circuit Judge for the radlands, he patrols the outposts and townships that eke out a living in these desolate wastes, and tries to maintain the peace in an otherwise chaotic environment. Now, he and rookie Judge Alonso have come under fire from the crazed Boyle…

CHOPPER: WANDERING SOUL
by David Ballie (w) Brendan McCarthy (a) Ellie De Ville
The Oz Radback, 2140 AD. Marlon Shakespeare was once one of MC-1’s greatest skysurfers, winning the illegal Supersurf 7 before escaping from the cubes to travel to Oz to participate in Supersurf 10. After the slaughter of Supersurf 11 in MC-2, he retired to Oz, where he’s mostly led a trouble-free life. After a stint as a beachguard, he’s now back in the Radback…

DREDD: THE DEAD WORLD
by Arthur Wyatt, Alex De Campi (w) Henry Flint (a) Chris Blythe (c) Annie Parkhouse (l)
Mega-City One, the cusp of the 22nd century. Eight hundred million people are living in the ruin of the old world, a planet devastated by atomic war. Only one thing fighting for order in a metropolis teetering on the brink of chaos – the men and women of the Hall of Justice. One such lawman is Judge Joe Dredd, who is battling creatures that have crossed over from an entropic dimension…

BONUS STORY: Razorjack – A Glimpse of Summer
by Michael Carroll (w) John Higgins (a) Sally Hurst (c) Ellie De Ville (l)
Prologue tale! A taster for next month’s main event: a titanic tussle between the Mega-City lawman and the murderous hell-beast herself!

BAGGED CONTENT: Nemesis the Warlock: A Monograph by Matt Smith