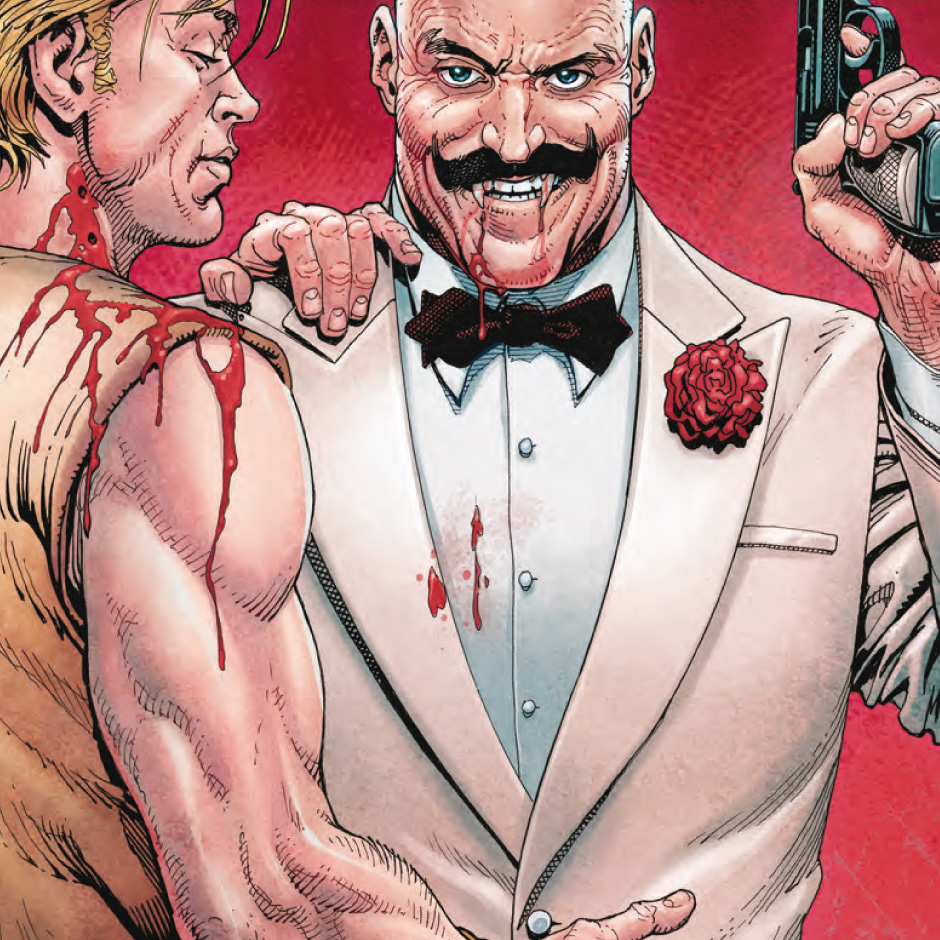 Vampire dandy Devlin Waugh is back this issue from writer Rory McConville and artist Mike Dowling as young celeb Mercury learns what it means to go on a date with the Brit-Cit paranormal troubleshooter.

In addition, alongside Judge Dredd, Chopper and The Returners, there’s a complete Tale From the Black Museum by David Baillie and Steven Austin, plus we have chats with Italian artists Nicolo Assirelli and Barbara Nosenzo, a tribute to former 2000 AD scriptdroid Michael Fleisher, and a peek inside this year’s 2000 AD Sci-Fi Special.

Don’t forget that if you buy this issue in print direct from our webshop within the next month you’ll not pay a penny in postage fees in the UK!

Judge Dredd Megazine #397 is out now from all good newsagents and comic book stores, plus digitally from our webshop and apps!

JUDGE DREDD: THIS CORROSION
by Michael Carroll (w) John Higgins (a) Sally Hurst (c) Annie Parkhouse (l)
Mega-City One, 2140 AD. This vast urban hell on the east coast of post-apocalyptic North America is home to over 72 million citizens. Stemming the tide of chaos are the Judges, empowered to dispense instant justice. Toughest of them all is Judge Dredd – he is the Law!

THE RETURNERS: IRMAZHINA
by Si Spencer (w) Nicolo Assirelli (a) Eva De La Cruz (c) Annie Parkhouse (l)
Ciudad Barranquilla, 2140 AD. This South American metropolis, sometimes referred to as ‘Banana City’, is a notoriously poor and corrupt enclave, ruled over by a Justice Department in the pockets of the cartels. Life on its streets can be short and violent, but for four very different people death is not the end but the start of something terrifying…

DEVLIN WAUGH: KISS OF DEATH
by Rory McConville (w) Mike Dowling (a) Simon Bowland (l)
Brit-Cit, 2140 AD. A freelance paranormal troubleshooter and exorcist for the Vatican, Devlin Waugh is the world’s foremost supernatural investigator. Despite becoming a vampire after getting bitten tackling an outbreak in an underwater prison, Devlin’s escapades have ensured he’s one of the most recognised celebrities on the circuit, and many seek out his company…

TALES FROM THE BLACK MUSEUM: PROPHET OF STOMM
by David Baillie (w) Steven Austin (a) Annie Parkhouse (l)
Mega-City One, 2140 AD. Deep in the heart of the Grand Hall of Justice lies the Black Museum, Justice Department’s permanent exhibition of the relics from bygone crimes. Whether it’s a notorious serial killer’s trophies or the weapons of the Dark Judges, the violent history of the Big Meg is laid bare here. Let guide Henry Dubble show you around…

CHOPPER: WANDERING SOUL
by David Ballie (w) Brendan McCarthy (a) Ellie De Ville
The Oz Radback, 2140 AD. Marlon Shakespeare was once one of MC-1’s greatest skysurfers, winning the illegal Supersurf 7 before escaping from the cubes to travel to Oz to participate in Supersurf 10. After the slaughter of Supersurf 11 in MC-2, he retired to Oz, where he’s mostly led a trouble-free life. After a stint as a beachguard, he’s now back in the Radback…

2000 AD shipments to US clear backlog caused by Covid-19

Covers Uncovered – Nick Percival’s going to give you nightmaressss…