Behold, Judge Dredd Megazine #408 has landed, and it’s filled to the brim with zarjazosity! 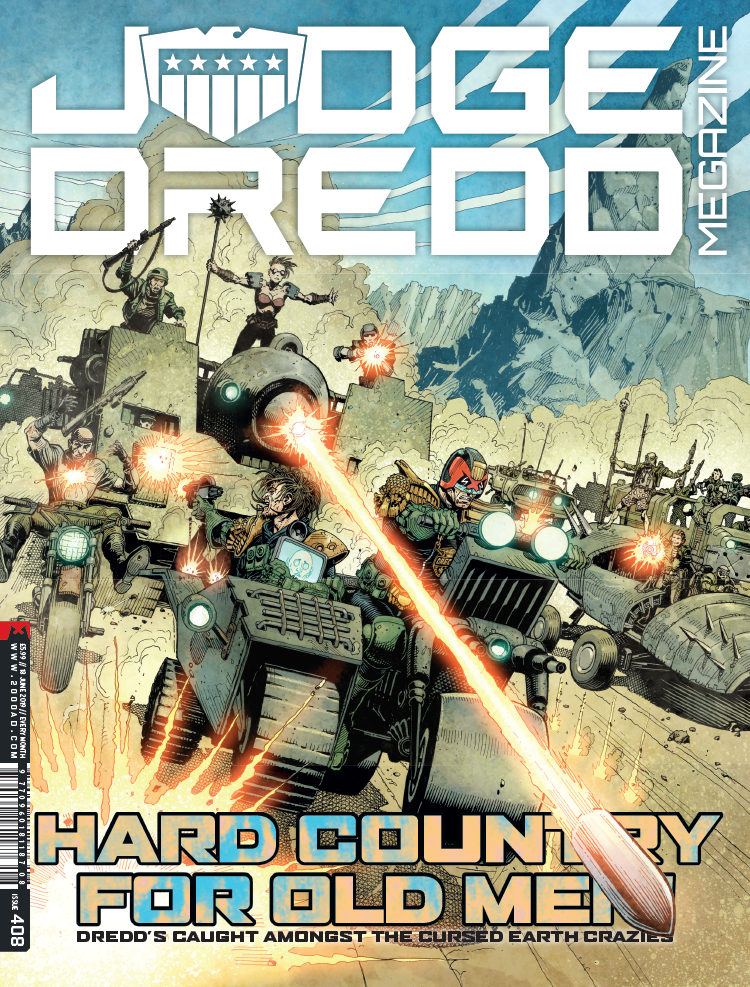 Welcome, Terrans, to issue #408 of the mighty Judge Dredd Megazine, which has been stuffed full with the best stories to well and truly get your Thrill-nodes going!

This week includes the finale of Judge Dredd: The Crazy, as well as the penultimate instalments of Lawless: Ashes to Ashes and The Dark Judges: The Torture Garden, as well as more Storm Warning and a brand new Black Museum story!

We’ve also got interrogations with art-droids Geoff Senior and Abigail Bulmer, and the first half of classic Starlord strip: Mind Wars!

Judge Dredd Megazine #408 is now available from all good comic book shops and newsagents – as well as 2000 AD‘s webshop and apps. It can be ordered from comic book stores via Diamond Distribution using code JAN192059.

Don’t forget that if you buy this issue in print direct from our webshop within the next month you’ll not pay a penny in postage fees in the UK! And if you subscribe to the Megazine you’ll get a FREE print of each month’s cover with each issue!

Mega-City One, 2141 AD. This vast urban hell on the east coast of post-apocalyptic North America is home to over 130 million citizens. Crime is rampant and stemming the tide of chaos are the Judges, empowered to dispense instant justice. Toughest of all is Judge Dredd – he is the Law! Now, he’s confronting ex-Judge Harrigan, who’s been broadcasting conspiracy theories…

Colonial Marshal Metta Lawson was appointed to the frontier township of Badrock on the planet 43 Rega, intent on stamping her authority on the colony. But in doing so, Lawson made many enemies, including Munce, Inc., the mega-corporation that funds Badrock. Now, Justice Department has flown in back-up, saving the town from being obliterated by Munce…

Brit-Cit, 2141 AD. Much like its Mega-City counterpart, Brit-Cit Justice Department has its various divisions, from Tek to plainclothes, Tactical to Psi, and one of its more prickly operatives in the latter is Lillian Storm, who has the ability to talk to the dead, and is often accompanied by her ghostly helpers. Now, she’s investigating a spate of mysterious murders…

Mega-City One, 2141 AD. Deep in the heart of the Grand Hall of Justice lies the Black Museum, Justice Department’s permanent exhibition of the relics from bygone crimes. Whether it’s a notorious serial killer’s trophies or the weapons of the Dark Judges, the violent history of the Big Meg is laid bare here. Let undead guide Henry Dubble show you around…

THE DARK JUDGES // THE TORTURE GARDEN

After the events on the Mayflower, the cargo ship the Solips discovered the Dark Judges Death, Fire and Mortis floating in space, and the alien superfiends murdered the crew. Landing on a remote Mega-City colony world called Dominion, Death and co used their powers to decimate the population. Now, Mega-City marines must rescue the survivors and destroy Dominion…