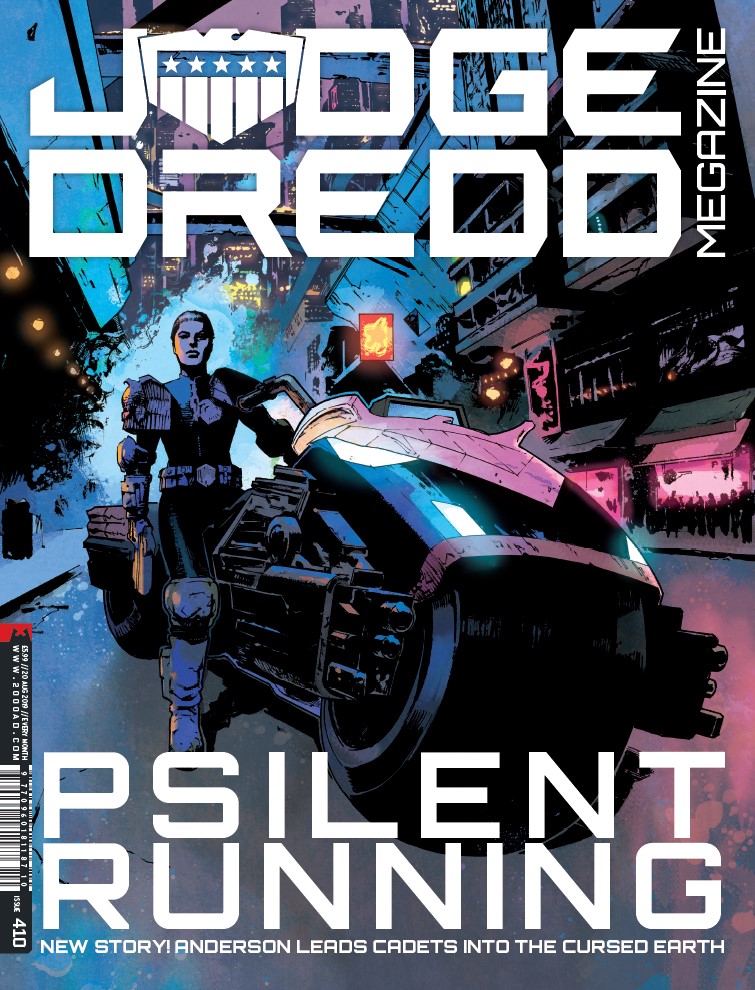 With Anderson now starring in her own strips both here and currently over in 2000 AD (Emma Beeby and Spanish artist Aneke are handling Cass’s caseload in the prog), we thought we’d make it an Anderson-focused month by reprinting some of her most recent stories in the back-up GN, including Maura’s first spin with the character from last year’s Sci-Fi Special.

The Irish writer also chats about her work with Karl Stock this issue, as does Aneke and two other creators new to the Galaxy’s Greatest, Brian Corcoran and Erica Schultz. Add to that interviews with The Kitchen writer Ollie Masters and Speed’s Barrie Tomlinson, plus the second thrilling instalments of Judge Dredd: The Red Queen’s Gambit, Diamond Dogs and The Returners: Chandhu, and you’ve got another packed Meg. Enjoy!

Judge Dredd Megazine #410 is now available from all good comic book shops and newsagents – as well as 2000 AD’s webshop and apps. It can be ordered from comic book stores via Diamond Distribution using code JAN192059.

Don’t forget that if you buy this issue in print direct from our webshop within the next month you’ll not pay a penny in postage fees in the UK! And if you subscribe to the Megazine you’ll get a FREE print of each month’s cover with each issue!

Mega-City One, 2141 AD. This vast urban hell on the east coast of post-apocalyptic North America is home to over 130 million citizens. Crime is rampant and stemming the tide of chaos are the Judges, empowered to dispense instant justice. Toughest of all is Judge Dredd – he is the Law! Now, Dredd’s travelled to the Mediterranean Free States to gain info on a Euro-Cit crime outfit…

Mega-City One, 2141 AD. Galen DeMarco was once a Judge, a rising star operating out of the corrupt dumping ground that was Sector House 301. But she quit the force after one romantic indiscretion too many and set herself up as a private investigator. Although the heir to a fortune, she lost much of her cash in one of her last cases, so is keen to take on any client…

Brit-Cit, 2141 AD. The remnants of old Britain still exist alongside the twenty-second century Mega-City, and these ruins are fought over by the Brit-Cit street gangs, who see them as valuable territory. Jimmy Slick’s Diamond Dogs is one such outfit, making a name for themselves in the criminal underworld. But Jimmy’s lieutenant, Nia Jones, is an informant for the Judges…

Ciudad Barranquilla, 2141 AD. Four different people – academic Barrancourt, ex-Judge Mineiro, gangbanger Correira, and transgender street-walker Chavez – all awoke from neardeath experiences, and as a consequence are capable of dealing with the supernatural. Now, they’ve been tasked with rescuing a Sino citizen from the Mongolian Free Zone…

Mega-City One, 2141 AD. Psi-Division is a section of Justice Department that specialises in Judges with accentuated psychic talents – from precognition to exorcism, projection to pyrokineticism, it is at the forefront in the war against supernatural crime. Cassandra Anderson is the division’s top telepath, and one of its most experienced operatives…