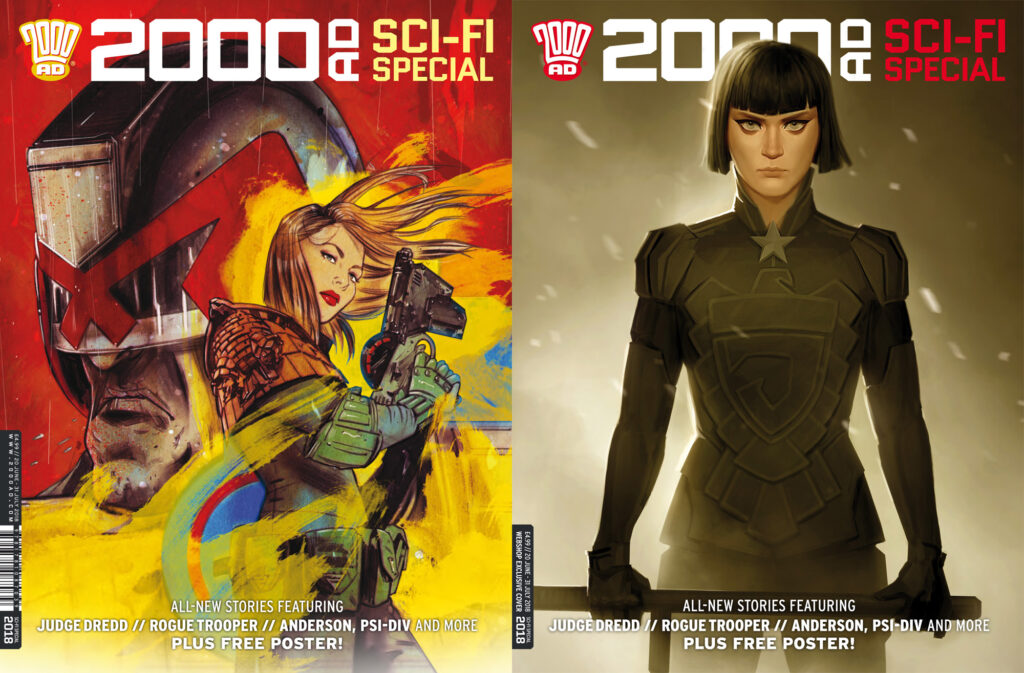 This standalone issue has been precision-engineered to be enjoyed during the summer months as you Terrans relax in a balmy back garden, a scorching sandy beach, or a stuffy airport terminal…

Within its forty-eight pages you’ll find no less than EIGHT all-new stories featuring some of the Comic of Tomorrow’s most popular characters: Judge Dredd, Rogue Trooper, Anderson, Psi-Division, Judge Death and more.

Add to that a spectacular Judge Anderson poster from Marguerite Sauvage, and it’s a quite the eye-popping issue!

JUDGE DREDD // THE FEELS
by Emma Beeby (w) Babs Tarr (a) Annie Parkhouse (l)
Mega-City One, 2140 AD. Home to over 100 million citizens, this urban hell is situated along the east coast of post-apocalyptic North America. With unemployment rife and boredom universal, crime is rampant, and only the Judges — empowered to dispense instant justice — can stop total anarchy. Toughest of them all is JUDGE DREDD —he is the Law!

TYRANNY REX: DON’T FORGET TO BLAST MY CACHE
by Katy Rex (w) Liana Kangas (a+c) Gab Contreras (c) Ellie De Ville (l)
The far future. Mercenary, artist and cloning pirate TYRANNY REX is a Sauron, a humanoid lizard-like race of which she is one of the last, having seen her people decimated. Now she’s on Earth, and making a living any way she can, from gun-for-hire to torrenting 3D downloads. She’s about to meet her partner that will set her off on a successful criminal career…

ROGUE TROOPER: THE THOUSAND DAYS
by Alex De Campi (w) Sam Beck (a) Eva De La Cruz (c) Annie Parkhouse (l)
Nu Earth is a war-ravaged world, its atmosphere poisoned by the use of chemical weapons, its air unbreathable. It’s the site of the global conflict between the Southers and the Norts, and the quest of genetically engineered soldier ROGUE TROOPER, who, together with the digitised souls of his dead comrades, is hunting for the Traitor General that sold out his platoon…

FUTURE SHOCKS: DELIVERY
by Tillie Waldern (w+a+l)
Out in the vast reaches of the universe, there are an infinite number of stories waiting to be told. These cautionary tales pass from traveller to traveller, acquiring the status of legend, their shocking ends a salutory lesson in hubris. Anything is possible in these twisted trips into the galaxy’s dark side. Abandon your preconceptions, and expect the unexpected…

JUDGE DEATH: DARKNESS DESCENDS
by Leah Moore (w) Xulia Vicente (a) Pippa Mather (c) Annie Parkhouse (l)
Mega-City One, 2140 AD. The 22nd-century metropolis has been plagued numerous times by the undead entity known as JUDGE DEATH, a creature from a twisted dimension that believes all life is a crime. Thirty years ago, in the city of Gotham, Death crashed the performance of rock band Living Death and slaughtered them. Apparently, a recording of that event still survives…

DEMARCO, P.I.: LOVE REMAINS
by Laura Bailey (w) Dani (a) Ellie De Ville (l)
Mega-City One, 2140 AD. Galen DEMARCO was once a promising young Judge, operating out of one of the most corrupt sectors in the metropolis. But after a liaison with a fellow officer, and professing her feelings to Joe Dredd, she left the force to set herself up as a private investigator. Tough and capable, DeMarco is often hired by those that can’t approach the Judges…

TERROR TALES: THE HOCKEY STICKS OF HELL
by Olivia Hicks (w) Abigail Bulmer (a) Annie Parkhouse (l)
Experience the terrifying side of Thrill-power with these one-off tales from beyond the shadowy veil of sanity. Whether they be ghostly goings-on that send shivers up the spine or guts-to-the-wall splatterfests that sear the retina and paralyse the mind, nothing is what it seems in these glimpses of a terrifying realm beyond our own…

ANDERSON, PSI DIVISION: SPA DAY
by Maura McHugh (w) Emma Vieceli (a) Barbara Nosenzo (c) Ellie De Ville (l)
Mega-City One, 2140 AD. There are many divisions in Justice Department to aid its fight against crime, and Psi-Div is the psychic branch, its operatives capable of telepathy, precognition and more. Psi-Judge Cassandra ANDERSON is one of the department’s most experienced and psychically powerful officers, who has battled supernatural foes for forty years…

Listen to the latest episode of Future Shocks Radio – exclusive for 2000 AD subscribers!