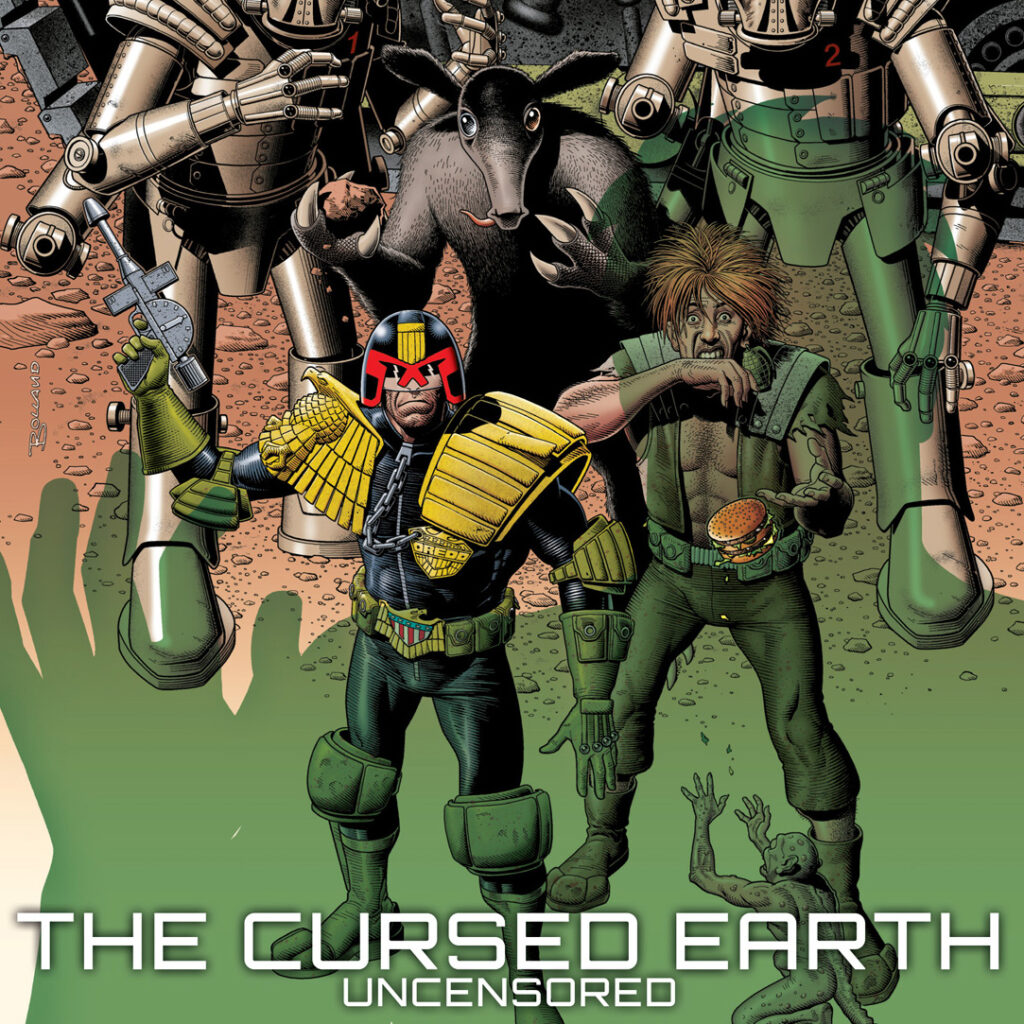 For the very first time the ‘banned’ episodes of Judge Dredd from the late 1970s are to be reprinted – and you can now pre-order the collection from the 2000 AD shop!

Published in 2000 AD in 1978, The Cursed Earth was the first great Judge Dreddepic, but the story ran into trouble when two episodes – ‘Burger Wars’ and ‘Soul Food’ – featured parodies of Burger King, Ronald McDonald, the Jolly Green Giant, the Michelin Man, and a number of other prominent corporate characters in a raucous and shameless satire of American consumer culture. After concerns of legal action at the time the then publisher IPC decided all subsequent collections of this classic strip would omit the satirical stories.

The most-requested reprint in 2000 AD history, The Cursed Earth saw Judge Dredd travel into the irradiated wastelands of middle America to deliver a vaccine to Mega-City Two on the West Coast, encountering a bizarre world of dinosaurs, murderous mutants, aliens, and deadly terrain in an insanely imaginative rollercoaster ride through the twisted landscape of American culture.

In ‘Burger Wars’, after World War III self-styled ‘burger barons’ had taken control of whole areas of middle America and were worshipped with religious zeal. Dredd and his comrades are captured and forced to consume burgers and shakes, only escaping thanks to the guards being fat and lazy due to too much fast food. They are then captured by the rival side and placed on trial for eating “the wrong kind” of burger.

In ‘Soul Food’, on their way through the Great Utah Dustbowl Dredd encounters the copyright infringing creations of Dr. Moreau-like scientist Dr Gribbons – including a Jolly Green Giant, a Michelin Man, and others – who drugs Dredd’s team in order to remove fluid from their nervous systems to keep his creations alive.

Comics Alliance recently featured some of the restored art from The Cursed Earth while you can get up close and personal with some of the original art from the series over the 2000 AD Tumblr, courtesy of generous Earthlet Mark Perry.